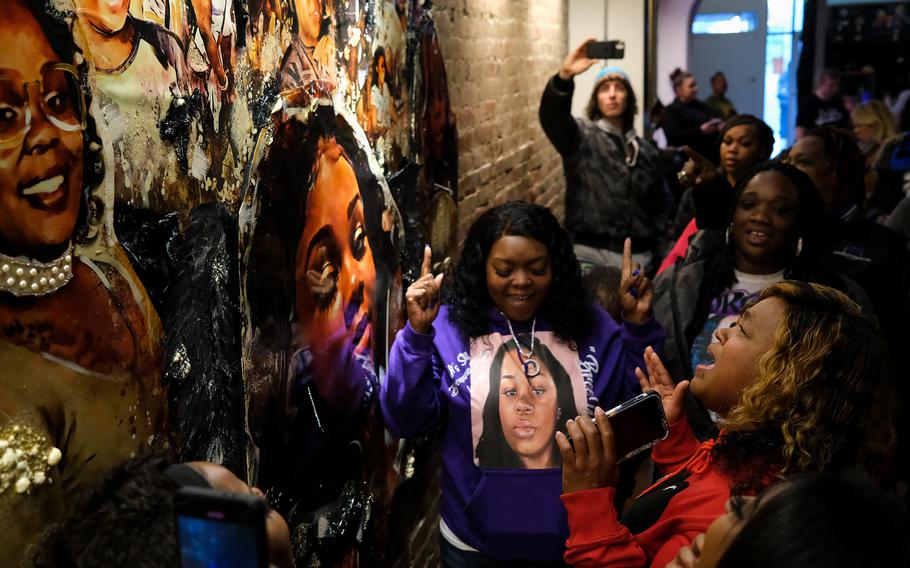 WASHINGTON — Four current and former Louisville officers are facing federal charges in connection with the fatal police shooting of Breonna Taylor — including excessive force, falsifying information on the search warrant that let to the killing and staging a coverup, Attorney General Merrick Garland announced Thursday.

Kelly Goodlett, Joshua Jaynes and Kyle Meany are accused of falsifying information on a search warrant before and after Taylor, 26, was killed in March 2020, sparking a wave of racial justice protests across the country. Brett Hankison is charged with two counts of deprivation of rights under color of law.

Hankinson and Jaynes were fired from the Louisville Metropolitan Police Department earlier, after being accused of wrongdoing related to Taylor's death, though Jaynes is suing to get his job back. A Louisville police spokesperson said in a statement that Chief Erika Shields "began termination procedures" for Meany and Goodlett on Thursday.

The counts announced Thursday are the first federal charges brought against any of the officers stemming from the raid.

At a news conference at Justice Department headquarters in downtown Washington, Garland said that the officers not only violated Taylor's Fourth Amendment rights but also knew the allegations listed in the indictments would lead to a dangerous situation — one that "resulted in Ms. Taylor's death."

"Breonna Taylor should still be alive," Garland said at a news conference.

Taylor, a Black emergency-room technician, was killed early on March 13, 2020, when plainclothes police officers burst into her apartment to carry out a search warrant in a drug probe. While the officers knocked, there is disagreement about whether they identified themselves as police.

Kenneth Walker, Taylor's boyfriend, fired a shot with his legally owned gun, striking an officer in the leg. He later said he did not realize the people who had entered the apartment were law enforcement officers. Several officers shot back, killing Taylor.

Louisville police later fired Det. Myles Cosgrove, who the FBI determined fired the fatal shot, and Hankison, who fired 10 shots that did not hit Taylor. State officials did not charge anyone in Taylor's death.

The first federal indictment unsealed Thursday charges Jaynes, 40, a former detective, and Meany, 35, a sergeant, with federal civil rights and obstruction offenses for their roles in preparing and approving the search warrant affidavit that contained false information and led to the raid.

A separate Justice Department charging document accuses Goodlett of conspiring with Jaynes to falsify the search warrant and cover up their actions afterward. Garland said Goodlett and Jaynes allegedly met in a garage after the killing and conspired to lie to investigators about the circumstances that led to it.

Hankison, 46, is accused of willfully using unconstitutional force for firing 10 shots through Taylor's patio door during the raid, according to a second indictment. He was acquitted in March of three state charges of wanton endangerment for firing those shots without a clear target.

Jaynes was previously fired by Louisville police for allegedly violating department policies in preparing the warrant for Taylor's home. Yvette Gentry, then the interim chief, wrote in a pre-termination letter that Jaynes had "lied" when he wrote in the warrant application that he had verified through a U.S. postal inspector that Taylor was getting packages related to alleged drug activity of her ex-boyfriend.

Jim Pasco, executive director of the National Fraternal Order of Police, said his organization is working to ensure that Hankison and the others receive due process in the federal case.

"The local community, which presumably has more knowledge and far broader access to the facts, has found charges not warranted," Pasco said. "Until anyone says differently, these men are not guilty of any crime."

Stew Mathews, who was Hankison's defense attorney in the state trial, declined to comment Thursday, saying he does not yet know if he will represent the former officer in the federal case. An attorney for Jaynes did not immediately respond to a request for comment. It's unclear whether Goodlett and Meany have attorneys.

The Justice Department and the FBI have long been probing the Taylor case for potential civil rights violations. In April 2021, Garland announced a "pattern or practice" probe of the Louisville police department to determine whether the agency had engaged in abuse of power and unlawful tactics. That investigation is ongoing.

On Thursday, the attorney general said his agency was committed to fighting for justice on Taylor's behalf, more than two years after her death.

"We share, but cannot fully imagine, the grief felt by Breonna Taylor's loved ones," Garland said.

Ben Crump, one of the lawyers for Taylor's family, called the federal charges "a huge step toward justice."

"What a great day to arrest the killers of Breonna Taylor!" he exclaimed in a news conference. "It's about Breonna and all the other Breonnas across America."

Crump and his fellow attorneys also denounced Kentucky Republican Attorney General Daniel Cameron for declining to charge any officers in Taylor's death. Cameron has filed paperwork to run for governor in 2023.

Tamika Palmer, Taylor's mother, told reporters that while the announcement from the Justice Department was satisfying, it still hurts knowing how her daughter was killed by police.