Phones of top Pentagon officials were wiped of Jan. 6 messages 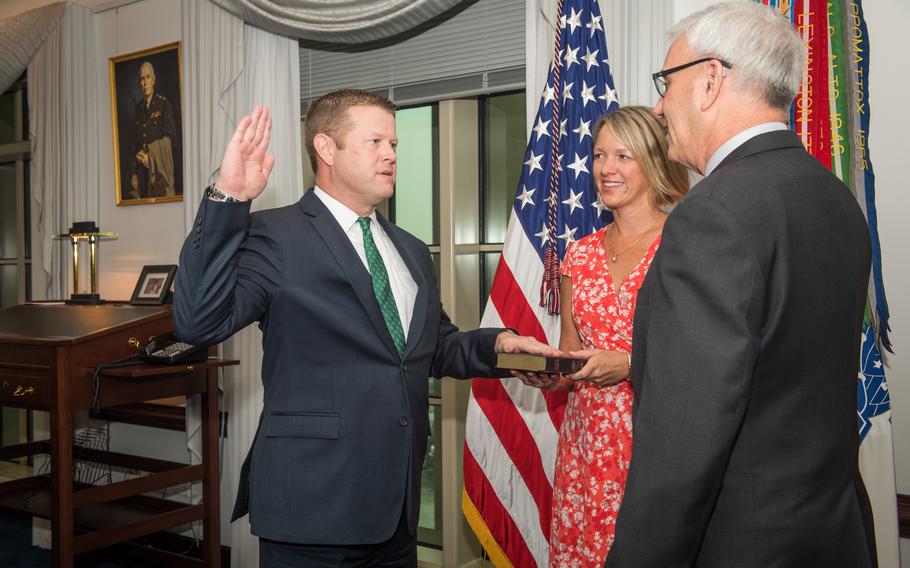 Ryan McCarthy swears in as Secretary of the Army in the Pentagon in Arlington, Va., Sept. 30, 2019. Court records published on the website of the watchdog group American Oversight indicate that the Pentagon “wiped” the government-issued phones of senior Defense Department and Army officials who were in charge of mobilizing the National Guard to respond to the Capitol attack, including then-Army Secretary Ryan McCarthy. (Dana Clarke/U.S. Army)

The Pentagon erased a potential trove of material related to the Jan. 6 attack on the Capitol from the phones of senior defense officials in the Trump administration, according to legal filings.

Court records published on the website of the watchdog group American Oversight indicate that the Pentagon “wiped” the government-issued phones of senior Defense Department and Army officials who were in charge of mobilizing the National Guard to respond to the Capitol attack, including then-acting defense secretary Christopher Miller and then-Army Secretary Ryan McCarthy. The erasing apparently was done in keeping with Defense Department and Army policy for departing employees, according to filings that state: “the text messages were not preserved.”

The admission comes as a blow not just to American Oversight’s efforts to unearth critical communications regarding the attack, but also to the House’s Jan. 6 special committee, which had asked Pentagon leaders to preserve and share all documents related to the riot. It also makes the Defense Department the latest known part of the federal government, including the Secret Service and other parts of the Department of Homeland Security, to have deleted records that could have helped investigators piece together what happened on Jan. 6 — and the degree to which President Donald Trump was responsible for delays in responding.

“From the reporting about the Secret Service and the senior DHS officials, it becomes pretty clear that this is not just a DOD problem, not just an Army problem, but multiagency,” said Dara Silvestre, a spokeswoman for American Oversight.

On Tuesday, the group’s executive director, Heather Sawyer, appealed in a letter to Attorney General Merrick Garland to open an investigation into “DOD’s failure to preserve the text messages of several high-ranking officials on or surrounding the day of the Jan. 6 attack.”

“The apparent deletion of records from Jan. 6 by multiple agencies bolsters the need for a cross-agency investigation into the possible destruction of federal records,” the letter continued.

Last week, Sen. Richard Durbin, D-Ill., sent a similar request to Garland, asking him to investigate the missing text messages from the Secret Service and the Department of Homeland Security.

American Oversight’s case began as a series of Freedom of Information Act requests, filed with various government agencies less than a week after rioters inspired by Trump attacked the Capitol to try to prevent President Biden from being declared the winner of the 2020 election. Among the documents that were sought were text and Signal messages, Silvestre said. The deletions appear to have been conducted after the FOIA requests were filed.

The Defense Department has produced a handful of heavily redacted emails, but no phone communications, according to the group.

The Pentagon’s admission that it had wiped the phones was included as part of a joint status report filed in March, but only publicized by American Oversight on Tuesday. Silvestre said that in the intervening months, the group has been trying to work with the agencies “to try to get them to release as much as possible,” as there are some phone records that are believed to have been preserved.

The suit is not only seeking records from former senior figures such as Miller and McCarthy. It also has asked for the phone communications of Gen. James McConville, the Army chief of staff, and Lt. Gen. Walter Piatt, director of the Army staff, who still work at the Pentagon and whose texts and secure messages should not have been deleted. According to court records, the Army began a search for those records last September, and another court filing updating the status of that search is expected next month.