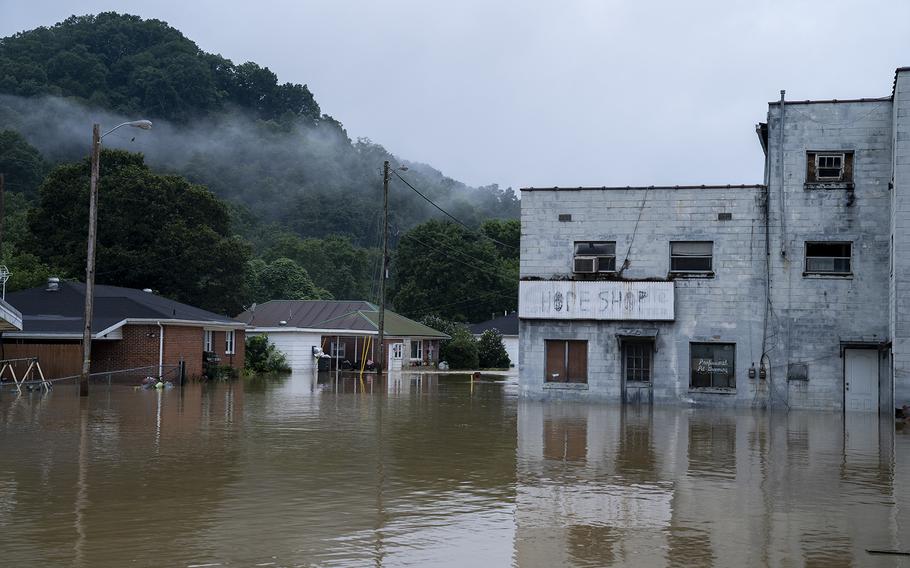 Flooding in downtown Jackson, Kentucky on July 29, 2022, in Breathitt County, Kentucky. At least 19 people have been killed and hundreds had to be rescued amid flooding from heavy rainfall. (Michael Swensen/Getty Images/TNS)

LEXINGTON, Ky. — Six months after the last round of destruction, historic flooding again consumed Eastern Kentucky, taking at least 19 lives, trapping others in homes and buildings, and sending thousands to shelters in what's becoming a devastating and disturbingly common disaster scene in Kentucky's Appalachian region.

As of noon Friday, at least 19 deaths have been confirmed across the Eastern Kentucky counties impacted by Thursday's flash flooding.

On Wednesday night and Thursday morning, significant rainfall led to rising waters throughout Southeastern Kentucky, trapping residents in their homes and causing over 23,000 Kentuckians to lose power.

According to the National Weather Service, the North Fork Kentucky River in Whitesburg rose to record-breaking heights on Thursday, reaching 20.19 feet at 10 a.m. and beating the previous record by 6 feet. The waters reached their peak at 2:30 a.m. Friday at 43.47 feet and are expected to recede to a more normal level by Sunday.

The rain is supposed to stop Friday and Saturday, which will help relief efforts, although it is predicted to return Sunday through Tuesday.

Gov. Andy Beshear declared a state of emergency on Thursday morning, and on Friday, President Joe Biden declared the flooding a major disaster.

On Friday morning, Beshear confirmed 15 deaths in a tweet, and he later updated the total to 16 during a press conference.

The Knott County Coroner confirmed to the Herald-Leader Friday afternoon an additional three deaths in the county, bringing the total victims in the region to 19.

The four children have been identified as Maddison Noble, 8, Riley Noble Jr., 6, Nevaeh Noble, 4, and Chance Noble, 1 1/2, a relative told the Herald-Leader. The victims were swept away from their parents in the flood on Thursday. The mother and father, Amber Smith and Riley Noble, were found alive

Some communities are still recovering from massive floods in January and February. Flooding has become more frequent and more destructive, thanks to more severe weather caused by climate change, and the valleys and steep hills of Eastern Kentucky that make it more conducive to flash flooding.

In March and February 2020, widespread flooding was recorded in 31 Kentucky counties, from Fayette to Martin. The state tallied more than $72 million in damage.

In an in-depth report on the problem in January, reporter Alex Acquisto noted: "The severity and frequency of flooding is unequivocally projected to worsen in the coming years as the climate continues warming, ultimately bringing more precipitation to vulnerable, unsupported terrain. Abandoned surface mines compound the land's susceptibility for flooding and landslides. Compacted soil and treeless, tiered topography left by strip mines acts as a slippery surface and reduces land's ability to absorb water. Lacking root systems that act as a natural guard against erosion, these steep slopes in some cases are more likely to give way, especially after heavy rainfall."

In Montgomery, Brittany Trejo said that her four young cousins, ranging in age from 1 to 8, were swept away from their parents' grip in flooding Thursday.

By 12:30 p.m. Friday, the bodies of all four children had been recovered from the Knott County community of Montgomery, Trejo said. Kentucky State Police spokesman Shane Goodall confirmed a report of four missing children Thursday night but said he didn't immediately have details.

Trejo said that the home of Smith and Noble in the Montgomery community filled with water Thursday.

"They got on the roof and the entire underneath washed out with them and the children. They managed to get to a tree and ... held the children a few hours before a big tide came and wash them all away at the same time," Trejo said.

"The mother and father was stranded in the tree for 8 hours before anyone got there to help," said Trejo.

Kentucky State Police spokesman Shane Goodall said it's pretty much impossible to have an exact count at this point due to many missing people, but more deaths are expected once the floodwaters recede.

Police were still rescuing people with helicopters in places no one can get to, Goodall continued.