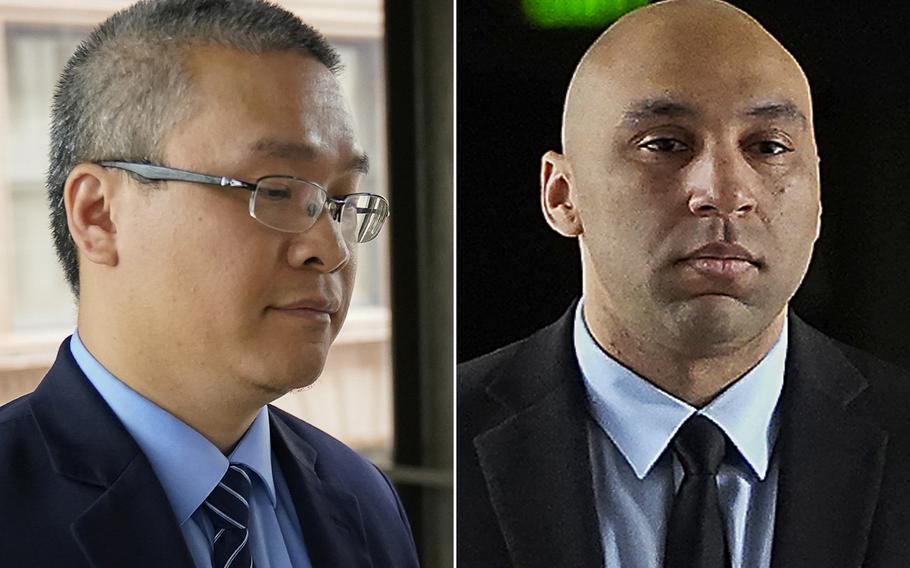 Wednesday offered contrasting hearings in which Floyd's loved ones expressed empathy for Kueng — who was on just his second day of duty the day Floyd died — while Thao unleashed a 23-minute address that quoted heavily from scripture and hinted at biblical retribution for those who charged him.

"Former officers Thao and Kueng each had an individual duty and opportunity to intervene in the excessive force that resulted in the agonizing death of Mr. Floyd, but both men failed to take any action," U.S. Attorney Andrew Luger said in a statement after the sentencings. "These sentences reaffirm that every law enforcement officer, whether rookie or senior, has an affirmative duty to protect individuals in their custody."

Lane, Thao and Kueng were each convicted in February after a 21-day jury trial. In all four cases, Magnuson opted to impose sentences below what federal prosecutors called for. The government wanted Magnuson to sentence Kueng and Thao below the 20-year term Chauvin received by significantly higher than the five to six years prosecutors argued that Lane should have received.

In both cases on Wednesday, Magnuson pointed to a lower degree of culpability for both men while emphasizing a positive assessment of their character. However, the judge added, "this is a serious offense that resulted in death."

"This occurrence must be avoided if at all possible and it was not avoided," Magnuson said before sentencing Kueng.

Thomas Plunkett, Kueng's attorney, underscored Kueng's age and lack of experience on the job. He described a scene in which Kueng's former training officer had taken control of the situation, and blamed the "poor quality of training in the area of intervention in the city of Minneapolis."

"Everything boils down to a fairly simple picture," Plunkett said. "He was a nice young man who endeavored to help the community by taking on a difficult role and now he is being sentenced for how that turned out."

Assistant U.S. Attorney Manda Sertich countered that Kueng's training and experience did not prevent him from appreciating that Chauvin's conduct was wrong. Sertich argued that Lane, by asking whether officers should reposition a motionless Floyd, gave Kueng an opening to intervene. "All he had to say was yeah, let's roll him now."

"It is equally true that someone can be a person, does good things and has the right ambitions but on one occasion has a catastrophic lapse that causes a person's death," she said. "Even if the death is unintended a serious punishment is warranted."

Magnuson said he would ask the federal Bureau of Prisons to incarcerate both men either in Duluth or South Dakota to allow them to be near family. He will allow both to self-surrender by Oct. 4, a date that could be affected by the upcoming state trial. Kueng and Thao are still awaiting an Oct. 24 trial in Hennepin County on state charges of aiding and abetting second-degree murder and manslaughter.

Thao stood by as Chauvin knelt on Floyd's neck and the other two officers restrained him. He held back a group of bystanders that tried to implore the officers to give Floyd medical attention as he lost consciousness.

Unlike Thao, Assistant U.S. Attorney LeeAnn Bell argued, the other officers involved "don't have a chorus of narrators explaining and reminding him that he needs to do something that something bad is happening and why he needs to do it."

Robert Paule, Thao's attorney, pointed out that Thao was not aware of the information being passed back and forth by the other officers about Floyd's condition and was unaware that Floyd lacked a pulse.

Kueng declined to address the court on Wednesday. But in his remarks before sentencing, Thao described the legal process as "a two-year journey that really brought me great distress. Being in law enforcement, I've never seen so much corruption early on in this case."

His words took on a tone suggesting biblical vengeance for their actions in the case.

"In due time their foot will slip; their day of disaster is near and their doom rushes upon them," Thao said in one quotation.

He later added, "As a father to three kids I can sit here to appeal for mercy but I appeal to my friends to turn to God, save your soul."

Magnuson closed Wednesday's hearing by referring to the statement made by Thao, who had expressed no remorse for Floyd's death.

"I'm told we are to forgive," Magnuson said. "That applies to all of us, and with that this matter is concluded."

An emotional Courteney Ross, Floyd's partner, returned to the courtroom to address both Kueng and Thao on Wednesday as she did in person during Lane's sentencing and through written remarks read before Magnuson sentenced Chauvin this month.

Speaking outside the courthouse later, she expressed disappointment over all four sentences and described how her feelings toward each of the defendants differed.

"For (Lane and Kueng) I feel like they are searching for something and I feel like they are looking for forgiveness," Ross told reporters. "Tou Thao, on the other hand, I did not feel that way. It's only when you repent do you find forgiveness and he has not made any attempt to feel anything that we're feeling, to reach out even in the courtroom to say something to the family."

To Kueng, Ross told him in the courtroom that "you fell hard. But this does not mean that you can't find your footing to stand up for what's right in your future."

"However long a sentence you are given you will still have a life ahead of you," she said. "This sentence will not define you yet you will be defined on how you plan to move forward by facing the consequences" of Floyd's death.

"As Floyd did, find your purpose and make a difference."

"The court is very appreciative of your comments," Magnuson said. "They are very appropriate. Through all the court's proceedings there is punishment and there is also forgiveness."