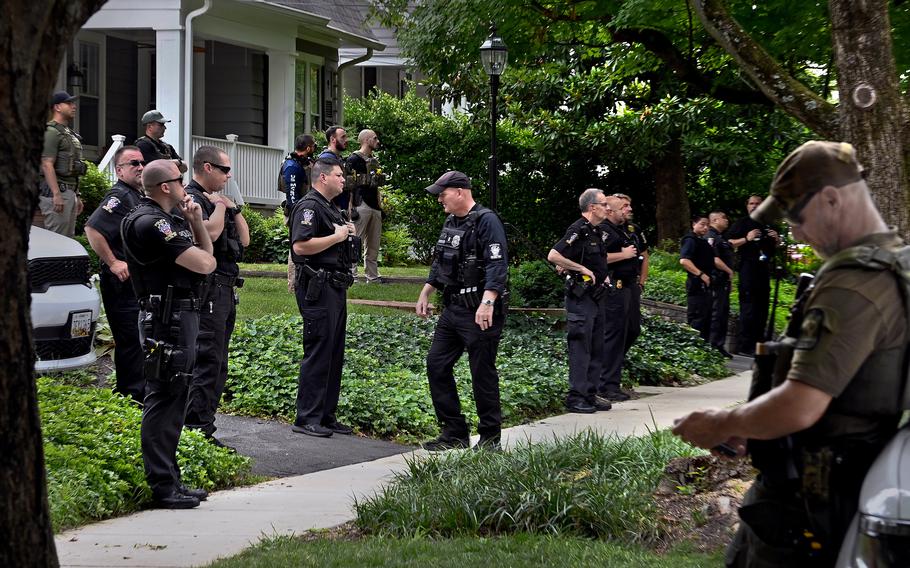 The California man accused of plotting to assassinate Brett Kavanaugh spoke of killing two more conservative justices in a bid to alter Supreme Court votes for years, according to an FBI affidavit filed this week in court.

The suspect, Nicholas Roske, 26, wrote in an online message to an associate: “im gonna stop roe v wade from being overturned.”

“[W]hat you tryna do,” the associate asked.

“[R]emove some people from the supreme court,” Roske allegedly responded, before adding, “I could get a least one, which would change the votes for decades to come, and am shooting for 3.”

Roske is accused of flying across the country and taking a cab into the Kavanaugh’s neighborhood in Maryland at 1 a.m. with burglary tools, a newly bought Glock pistol and 37 rounds of ammunition. He has been charged with a single count of attempting to kill a U.S. judge. He was recently ordered to remain in custody pending further court actions. Roske’s attorneys have consistently declined to speak about the case, and his family members have not responded to requests for comment.

The affidavit about Roske’s alleged intentions, reported earlier by Fox News, was filed in court as part of the FBI’s attempt to obtain a search warrant compelling social media and email companies to turn over records related to Roske’s writings. The affidavit does not name any specific justices Roske is alleged to have considered additionally targeting.

The agents assert that, based on what they’ve gleaned from the online records provided by the associate and based on what they’ve seen on Roske’s cellphone, a fuller accounting of Roske’s online writings will offer a fuller accounting of intentions. The agents also say that when they spoke to Roske after his arrest, he said that “he used Reddit, Google and other online forums to learn the skills he thought were necessary to complete his plan.”

Already, according to his phone records, the FBI says they found that Roske conducted internet searches that included “most effective place to stab someone,” “assassin skills,” “assassin equipment” and “assassinations.” Roske’s email inbox on his phone, according to the FBI, had a sales order confirmation for $49.95 lock pick.

The case against Roske broke open at 1:38 a.m., June 8, when he called 911 from a dark street in Chevy Chase, Md., around the corner and about one block from Kavanaugh’s home, according to 911 recordings.

Law enforcement officials and court filings had previously accused Roske of arriving in Kavanaugh’s neighborhood with - in addition to the gun and ammunition - “hard-knuckled tactical gloves” and made-to-be-quiet boots with padded outer soles to break into the justice’s home.

Going back to at least a month before his flight, according to the FBI, Roske made incriminating statements over social media and in internet searches. On May 10, the affidavit alleges, he posted text on Reddit that stated: “Would Kavanaugh being removed from the SC help women long term?”

On May 25, according to the FBI, Roske received an email from a gun retailer in Simi Valley, Calif. “We appreciate you stopping by and checking out our range and training facility,” the company wrote. “As a thank you, we would like to give you 5 dollars off your next visit.”

Two days later, according to the affidavit, he heard from the lock-pick company, confirming his order.

On June 6, Roske posted a question on Reddit using what the FBI calls an abbreviation for high-value target: “How difficult is it to covertly take out an HVT?”

Also during this time, according to the affidavit, Roske typed assassin-related internet searches along with searches for “quietest semi auto rifle,” “gun lubricant” and “how to be stealthy.”

After flying into the Washington area and taking a cab to Kavanaugh’s home, Roske got out but saw two U.S. Marshals - part of the justice’s home security detail - standing outside their vehicle. Roske “turned to walk down the street,” the FBI wrote.

He then texted his sister and told her his intentions before she convinced him to call 911, officials have said.

In the recent affidavit, the FBI said Roske “indicated that he believed the justice who he intended to kill would side with Second Amendment decisions that would loosen gun control laws. Roske stated that he began thinking about how to give his life a purpose and decided that he would kill the Supreme Court Justice.”

The Washington Post’s Jasmine Hilton contributed to this report.