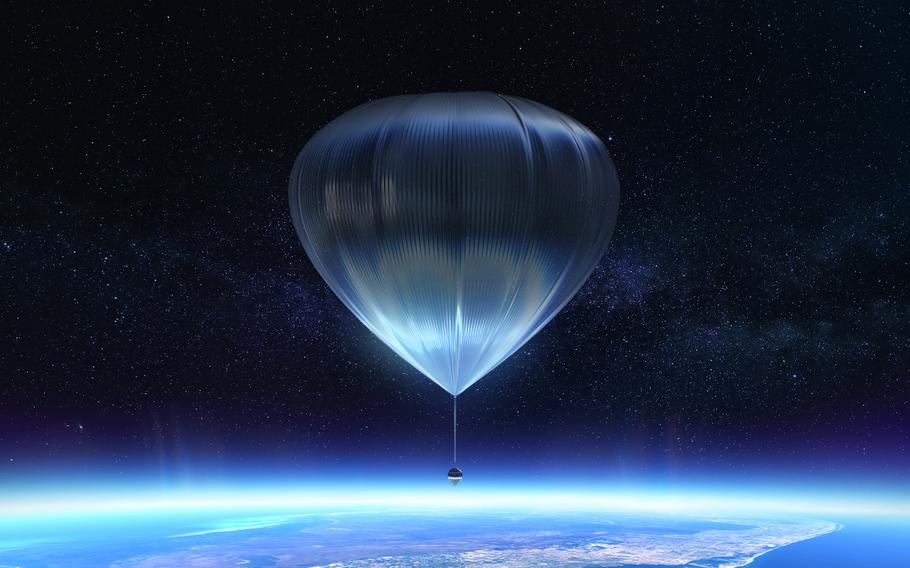 ORLANDO, Fla. (Tribune News Service) — When passengers lift off on a massive space balloon from Kennedy Space Center in a couple of years, they'll be flying in a sleek, cone-shaped capsule with reflective windows offering 360-degree views 20 miles above the Earth's surface.

Space Perspective revealed new designs for the exterior of what resembles a high-tech golf ball on a tee for the capsule of its Spaceship Neptune space balloon that is being manufactured at facilities on the Space Coast.

Key to the design is both exterior and interior features designed to keep passengers comfortable and safe during six-hour flights that are planned to begin in 2024, the company said in a press release.

The luxury flights cost $125,000, with deposits starting at $1,000 per person, with nearly 900 booked to date, the company stated. It aims to pilot 25 flights in its first year of operation.

"The team has come together to create an amazingly robust, safe, and incredibly elegant and luxurious system for Spaceship Neptune," said the company's founder, co-CEO and CTO Taber MacCallum. "Simplicity and automation are the keys to safety."

The spherical design allows for more space for up to eight guests to offer more complete views during the ride that will spend two hours rising up from, two hours floating above and then two hours descending back to Earth in a capsule suspended from a 650-foot-tall balloon.

While the company in time plans for flights from many global launch points, the first trips will take off from the former Space Shuttle Program landing site at KSC, now run by Space Florida, the state's aerospace economic development agency. Landings will take place in the Gulf of Mexico.

The tee-like shape below the sphere is designed to assist in the water landings, which the company states has been determined by NASA to be the lowest risk way to land. Both SpaceX Dragon capsules and the planned Orion capsules in the Artemis program are designed for water landings, while Boeing Starliner capsules make terrestrial landings.

"Centuries of balloon and parachute operation and development demonstrate that always flying with the balloon from launch through landing, with traditional parachutes as a reserve backup system, is by far the simplest, safest and most robust solution," MacCallum said. "Our proprietary flight system means that the capsule and (space balloon) always remain connected, and takeoff and landing conditions are always within our control."

Once it lands in the water, retrieval boats will pick up the passengers, capsule and balloon for the return trip to Brevard County.

Working with Siemens Digital Industries, the company's updated capsule design features what it says is better pressure resistance due to the spherical design, and reflective coated windows to limit solar effects on the view and comfort on the interior, which will also use a thermal control system.

The company had previously revealed interior design renderings that included reclining seats, a bar, restroom and mood lighting. Passengers will be able to use on-board satellite imagery and 360-degree cameras that can zoom in on features both on Earth's surface and in space.

Flights are subject to approval by the Federal Aviation Administration's Office of Commercial Spaceflight.

It previously sent up a successful test flight in June 2021 with an unmanned balloon that hit an altitude of 108,409 feet. The company plans a crewed test flight in 2023.