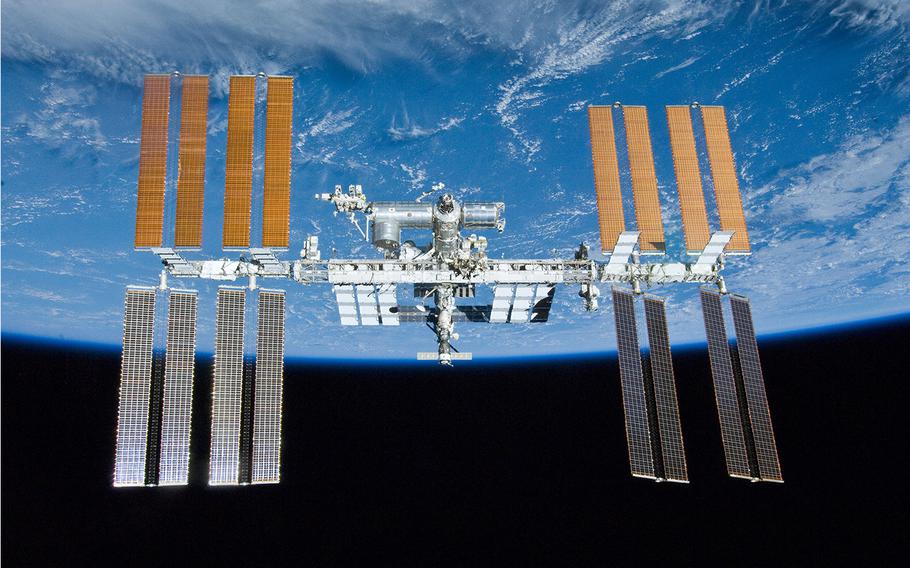 Russia has been NASA’s main partner on the space station for more than 20 years. (NASA)

There was a lot of consternation at the announcement — handwringing over the declaration by the newly appointed head of Russia’s space agency that Russia would depart the International Space Station partnership after 2024 and develop a space station of its own.

But since then, the reaction from NASA has been something resembling a yawn.

Russia has been NASA’s main partner on the space station for more than 20 years, but after years of frequent bluster from Russia, NASA officials have basically shrugged off the latest statement from Moscow and said they would continue to operate as if nothing has changed.

Because, in a way, nothing has. Russia has not formerly notified the space station partners that it is leaving, something it’s required to do a year before departing. Without that, everything else, the agency seems to say, is noise.

On Tuesday, Roscosmos, the Russian space agency, published a lengthy interview with one of its top officials, who said the first segment of the station Russia would like to build wouldn’t launch until 2028, a date some industry officials think would delay any disengagement from ISS.

“We are staying the course,” NASA associate administrator Bob Cabana said Wednesday at a conference in Washington dedicated to the orbiting laboratory. “We are working to extend the International Space Station to 2030. It’s got good years left, and as you’ve heard today, it’s extremely busy right now, and we have much more we can do.”

Many space officials privately rolled their eyes at Russia’s latest announcement. Russia had threatened before to leave after the current agreement expires at the end of 2024 and had been doing that with more gusto ever since the invasion of Ukraine prompted more U.S. sanctions. And they pointed to the fact that Russia’s latest missive said they would leave sometime after 2024, which could be 2025, or 2026 — or later. There is no way to know.

It’s not like the Russia segment of the station could be disconnected from the American side with the push of a button. The station took years to assemble and would require a lot of work, and spacewalks, to separate the modules — if that were ever to happen.

Instead of moving toward disengagement, Russia’s recent actions have pointed in the opposite direction. Russia recently announced it would proceed with a series of crew swaps, sending American astronauts on Russian spacecraft, and Russian cosmonauts on American spacecraft.

Work continues on board the orbiting laboratory as it does every day. On Tuesday, the day Russia announced it was leaving the station, Russia’s Oleg Artemyev, the current space station commander, was working on a cardiac research study designed to help doctors learn how to keep astronauts safe on long-duration space missions. Along with fellow cosmonaut Denis Matveev, he helped put away the tools used in a spacewalk last week while the third cosmonaut on the station, Sergey Korsakov, was checking the robotic arm on the Russian side of the station.

“We’ve seen this story many times before,” Casey Drier, senior space policy adviser at the Planetary Society, a nonprofit advocacy firm, wrote on Twitter. “Color me skeptical of any immediate changes.”

The Europeans are shrugging off Russia’s statement as well. In a statement to The Post, a spokesperson for the European Space Agency said that “the news of Russia leaving the Space Station after 2024 and building its own infrastructure is not new and was mentioned before.”

Behind the scenes, NASA is scrambling to figure out how best to proceed if Russia does pull out. “We are exploring options to mitigate any potential impacts on the International Space Station beyond 2024 if in fact Russia withdraws,” John Kirby, the National Security Council spokesman, said. “That’s the responsible thing to do.”

A public stance of acting nonplussed may appear to be the sort of manufactured calm top governments have to project when dealing with a fickle partner. But it also is a strategic one. NASA desperately wants to keep the space station going. It is the linchpin of the nation’s human exploration program. The station is also a tool of diplomacy, a lab that produces science, a test bed for future commercially built stations and, at the moment, the only destination NASA has for its astronauts.

Without the station, NASA’s astronauts have nowhere to go. While NASA plans a return to the moon, a human landing is set for 2025 — at the earliest. The station is also a key driver for the growing commercial space industry. NASA has invested billions of dollars in SpaceX and Boeing to develop spacecraft capable to ferrying cargo and astronauts to the station — and NASA wants to see that investment endure.

NASA, of course, is aware that the station is aging and can’t stay up forever. It has invested hundreds of millions of dollars, with more to come, in companies planning commercial space stations that would replace the ISS. But those platforms are years away from being operational, and many fear that if the station is retired before they are ready, there will be a gap.

All of which is why NASA officials at the space station conference this week waxed poetically about the football-field-sized station.

“We’re just getting into our stride on what we’ve been able to accomplish on the International Space Station,” Cabana said. “And it’s only going to get better. It is so critical to our future from a science point of view, from an exploration point of view and from developing commercial operations.”