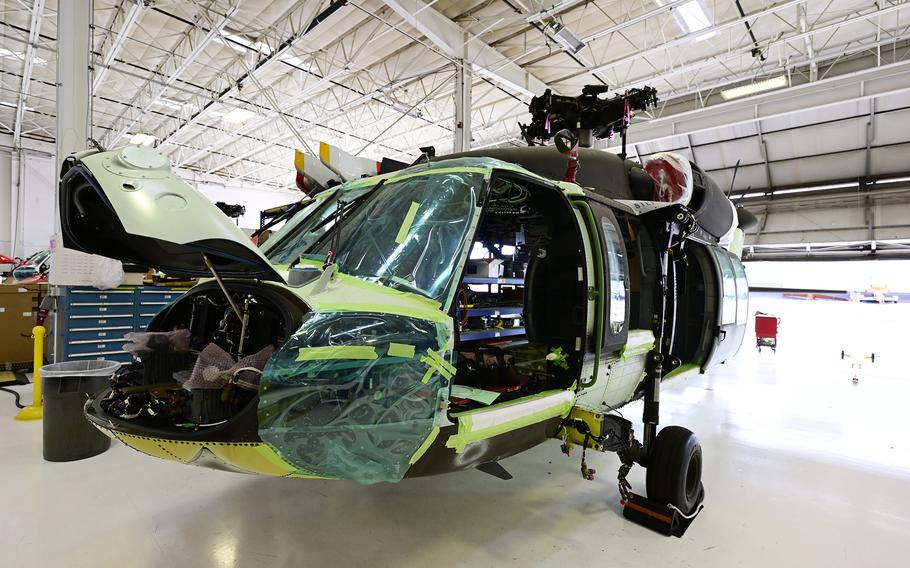 CENTENNIAL, Colo. (Tribune News Service) — Sitting in a Centennial hangar is a Black Hawk helicopter far from fit to fly.

Its electronic guts hang loose in the cockpit. Its floors are ripped up. Its seats might as well be on a beach somewhere.

And it’s looking just the way it’s supposed to.

The chopper is undergoing a transformation, one from matte military utility to red, white and blue, with a water-filled gut and unique firefighting capabilities. It is turning from Black Hawk to Firehawk.

The work-in-progress helicopter came from Poland by way of Texas before landing at Centennial’s United Rotorcraft. The company has converted several of the helicopters already, but always for out-of-state customers. This is the first that’s staying home.

“Don’t get me wrong, it’s great that we’re doing it for the state of California,” program manager Eric Lama said during a recent tour of the hangar. “But to be able to have this in our own backyard and doing good for our local communities, that’s the icing on the cake for us.”

The Colorado Legislature voted overwhelmingly in 2021 to buy the $24 million aircraft, its first session after 2020’s historically large wildfires. Many have been waiting eagerly for the work to be done. Senate President Steve Fenberg, who sponsored SB21-113, joked that when he saw the Firehawk-in-progress in early July, he patted it as a pre-emptive thank you for its service.

The final product won’t be delivered until about the end of the year, Lama said, as mechanics and engineers install the custom panels, electronics and tools and adjust things like landing gears to make sure they fit and fly.

Once finished, it’ll have a hose that can vacuum up 1,000 gallons of water in a minute and dump it in three seconds. Infrared sensors will give it night-time capabilities, and modular seating allows it to zip fire crews to hot spots and evacuate people endangered by flames.

The helicopter platform allows it to deploy and attack fires differently from the massive tanker aircraft typically seen, and Black Hawk’s specifically have a ruggedness suited for the rough-and-tumble nature of the work, Lama said.

It won’t be able to knock down a 100,000-acre fire, but it’s not designed to. Instead, the hope is it’ll stop fires from getting that large.

In the meanwhile, as it sits in aeronautic surgery, fires are still breaking out. Wildfire is part of the natural ecology of Colorado, but it’s no longer confined to a season — as the tragedy of the Marshall fire shows all too starkly. Every plume of smoke is an exclamation point on what the bird can be doing once it starts flying.

“Whenever I see that type of stuff happen, I’m always looking for ways to work with the team to shave some time off and get the aircraft out there even sooner,” Lama said. “But there are some limitations we just can’t work through. It’s a heartache, but at the same time we also want to make sure we deliver a quality, safe product to the customer. We don’t want to cut corners.”