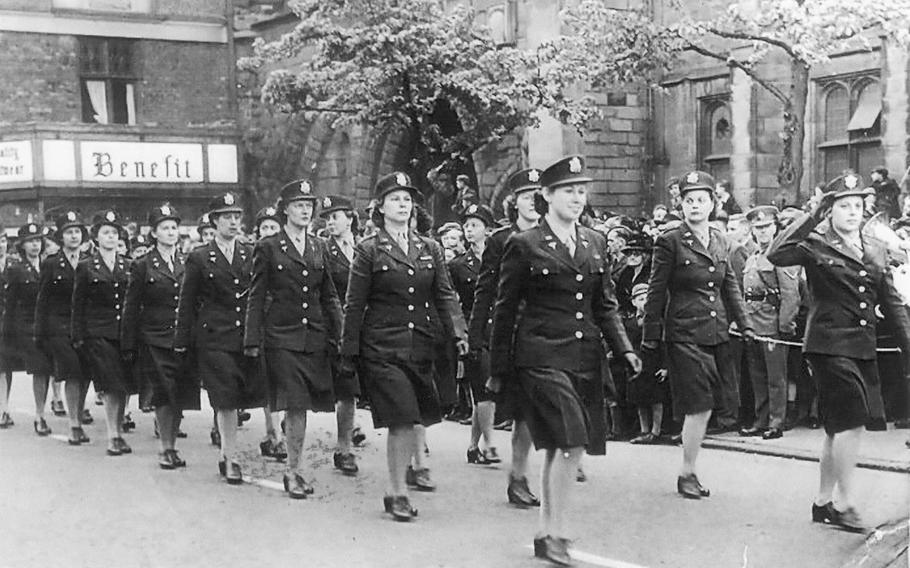 As American soldiers fought to stave off a German offensive in the Ardennes Forest of Belgium, Muriel Engelman and her fellow Army nurses worked in snow, ice and ankle-high mud, tending to wounded GIs during one of the bloodiest battles of World War II.

For more than two months, starting before the Battle of the Bulge commenced in December 1944 and continuing through the New Year, they faced a near-constant barrage of German attacks, with V-1 buzz bombs exploding every 15 minutes, day and night. Nazi planes strafed the field hospital, and the camp was hit three times by bombs even though its tents were painted with large red crosses.

“After a while, you learn to cope,” Engelman recalled. Although she feared what the Germans might do to her if she was captured — she was one of only two Jewish nurses at the hospital, with an H for Hebrew imprinted on her dog tags — she adopted a realist attitude: “What will be, will be.”

When German infantry reached the outskirts of Liège, about 10 miles from the field hospital, Engelman and her fellow nurses were told to pack their musette bags with first aid supplies and the warmest clothes they had, in case they were taken prisoner.

She found room for a few additional items: her liquor ration and cigarettes, which she planned to use for bartering, and the French perfume she had purchased in Paris a few months earlier. She didn’t want it to fall into German hands.

“We were scared,” she acknowledged in an oral history for the Veterans History Project of the Library of Congress. Her patients were frightened for her, as well: One wounded GI made her a blackjack, “a 10-inch length of hosing stuffed with lead sinkers, and suspended from my wrist by a leather thong,” while another gave her a spring-assisted knife.

“If a German approaches,” he suggested, “plunge the blade into his belly, then turn it and run like hell.”

A dance-loving Connecticut native on the cusp of turning 24, Engelman couldn’t imagine plunging a knife into anyone’s belly. She survived the battle — the German advance was halted that January — and went on to write a wry memoir, “Mission Accomplished: Stop the Clock” (2008), that Kirkus praised as “a must-read for WWII history buffs and lovers of homespun storytelling.”

Its cover photo, taken on a frigid day during the Battle of the Bulge, showed Engelman casually holding the blackjack, smiling at the camera with the knife bulging inside her coat pocket. After six weeks of bombings, she had deep hollows under her eyes.

Engelman was 101, and one of the last surviving Army nurses to serve near the front lines during World War II, when she died June 30 at a board-and-care home in Laguna Niguel, Calif. Her children, Curtis and Suzanne Engelman, confirmed the death but did not cite a cause.

Nearly 60,000 American nurses volunteered to serve in the Army during World War II, caring for soldiers at field hospitals and on trains, ships and medical transport planes. Engelman insisted she was no different from any of them, even after being appointed to the French Legion of Honor in 2018 in recognition of her wartime service.

“I’m not brave,” she had previously told the Orange County Register. “I didn’t do anything different from what anyone else did. I was just one of many.”

The second of three children, she was born Muriel Rose Phillips in Meriden, Conn., on Jan. 12, 1921. She was 11 when her father, a Lithuanian-born jeweler who owned a silver factory, died after being treated for scarlet fever. Her mother went to work to support the family, running a dress shop and later leading the local chapter of Hadassah, a Jewish women’s organization.

Even as a child, Engelman seemed destined for a career in medicine. “She brought home every dog and cat that was injured and bandaged them up,” her son said in a phone interview. Her mother once told a newspaper reporter, “Everyone’s trouble was her concern.”

After graduating from high school in 1938, Engelman studied nursing at Cambridge Hospital (now Mount Auburn Hospital) in Massachusetts, becoming a registered nurse in 1942.

The next year, she reported for duty as a second lieutenant in the Army Nurse Corps. She had considered joining the Navy, she said, but wasn’t a great swimmer. “I thought that I’d rather get killed on land than on the water.”

After applying for overseas duty, she trained for combat scenarios while going on 15-mile hikes, scampering down rope ladders and crawling on her belly under a barrage of live ammunition. She arrived in England in early 1944 and moved into a hut with seven other nurses, gardening in her spare time and mingling with American servicemen.

“We had 10 dates a night,” she recalled. “There was no shortage of men, and I know at one point I said, ‘Well, I’m through going with the medics, because the infantry was more exciting and then the Air Corps, they were even more fun.’”

Six weeks after the D-Day invasion of Normandy, she and her unit crossed the English Channel into France, a voyage that should have taken a few hours. Instead it took three days, as their transport ship was forced to navigate a maze of sunken ships and downed planes.

They camped in a cow pasture in Normandy, where they waited for Allied forces to clear the Germans out of Belgium and passed the time by playing baseball and softball. By November 1944 they were in Liège, where they set up a 1,000-bed field hospital at an old apple orchard. It was soon filled with wounded soldiers.

Nearly 20,000 Americans were killed during the Battle of the Bulge, and tens of thousands more were wounded, missing or captured. As the fighting escalated, Engelman worked 12-hour shifts, and tried to maintain her sense of humor even as the bombs made it difficult to sleep.

During one aerial attack, she and her patients scrambled under hospital beds for cover when she let out a shout. A corpsman asked if she had been hit. “No,” she replied, “only by a loaded duck” — slang for a full urinal.

Engelman later treated German prisoners of war, “the very people that tried to kill me,” she noted. “Of course, they were human beings, so I did.”

After completing her Army service in 1946 as a first lieutenant, she married Melvin Engelman, a dentist and Marine Corps veteran, and settled in Wappingers Falls, N.Y., where she raised her two children, founded a nursery school and organized a local conservation group. She also created a scrapbook of her wartime memories that became a crucial resource for her memoir.

Engelman and her husband retired to Florida before moving to Southern California in 2010. He died in 2020. Survivors include her children, Curtis of Binghamton, N.Y., and Suzanne of Laguna Niguel; two grandsons; and two great-grandchildren.

After she was discharged from the Army, Engelman sometimes traveled to New York City to greet American troops arriving from overseas. She was reminded, perhaps, of her own return from France, with a bottle of champagne in her luggage that her family opened at Thanksgiving.

“You didn’t cry at all over there. But the day we sailed past that Statue of Liberty, there wasn’t a dry eye on that ship,” she said in the oral history. “It was the most beautiful sight in the world - coming home.”