Washington, D.C., leads the nation in monkeypox cases per capita 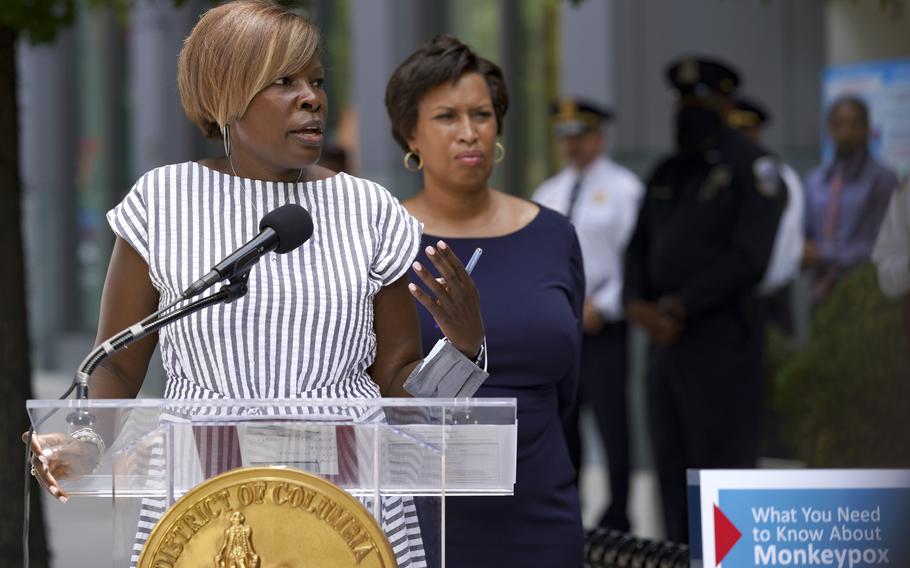 WASHINGTON — The District of Columbia has more cases of monkeypox per capita than any state, prompting public health officials to launch an aggressive vaccination campaign aimed at blanketing the most at-risk communities.

As of Friday, health departments were reporting 122 positive cases in D.C., 44 in Virginia and 37 in Maryland, but D.C. public health officials say there are more people infected than the data show because not everyone with symptoms obtains a test.

New York, California, Illinois and Florida lead the country in recorded numbers of cases, Centers for Disease Control and Prevention data show, with case counts of 489, 266, 174 and 154, respectively.

Although not considered a pandemic, a global outbreak of monkeypox has touched more than 60 countries, including the United States, where more than 1,800 cases have been reported since the first one in mid-May in Massachusetts.

D.C. Mayor Muriel Bowser, D — at a news conference Monday outside Whitman Walker Health, which specializes in LGBTQ and HIV care — said officials are working to administer a vaccine quickly and encouraged residents to preregister for free appointments at PreventMonkeypox.dc.gov.

The District has received about 8,300 doses, most of which arrived last week, and about 2,600 first doses of the two-dose regimen have been administered, she said.

D.C. Health Director LaQuandra Nesbitt said Monday that by far the hardest hit are people in their early 30s who belong to the LGBTQ-plus community, but she emphasized that the virus can infect anyone.

“It is important that we do not create stigma at this time and that we encourage individuals to be on the lookout for symptoms,” she told reporters Monday.

The CDC is allocating doses of Jynneos, the only vaccine specifically approved to prevent monkeypox, based on the number of confirmed monkeypox cases and the size of the population of men who have sex with men who are HIV-positive.

D.C. was part of the initial tier of recipients and has received significantly more vaccine than neighboring states. The District expects to receive an additional 4,000 doses next week and is looking for partners, especially those serving the Black LGBTQ community, to host pop-up clinics, Nesbitt said.

D.C. is often treated as a state for infection tracking and federal funding purposes, but even compared with cities, D.C. has among the highest monkeypox case rates. As with the coronavirus, the entirely urban nature of the District means the virus has a better chance of spreading, whereas states have urban, suburban and rural areas.

Patrick Ashley, senior deputy director at the D.C. Department of Health, said Friday that about 65% of people who tested positive are White and 21% Black. In addition, a quarter identify as Hispanic. The District has recorded no biologically female cases, he said.

D.C. officials declined to say in which wards cases are most prevalent to protect people’s privacy. A few District residents have been hospitalized for pain control, but no one has been hospitalized directly because of monkeypox complications, he said.

“Monkeypox can be exceptionally painful, especially if there are lesions on the penis, a lot of penial swelling, on the anus as well, it can be significantly painful,” Ashley said. “This is not chickenpox.”

He encouraged people to be vigilant in monitoring themselves and their sexual partners for any unusual skin conditions.

“If they see something strange on their body whether it’s a rash or a lesion or something that just doesn’t look right, [it’s important] that they talk to their provider,” he said. “People can be apprehensive about talking to their doctor about things on their body that could be monkeypox or something else. We want individuals to feel comfortable seeking care.”

District contact tracers had identified about 560 close contacts as of Friday, but the true number is higher, Ashley said. Officials recognized early on in the global outbreak that because of the nature of the most affected population — people with multiple partners and those having anonymous sex — it would be impossible to contact everyone who may be at risk. In response, D.C. designed the vaccination effort to blanket the community with protection.

“Part of the reason we’re doing expanded post-exposure prophylaxis is that very reason,” Ashley said. “We know there are these exposures in the community but we can’t actually track them down and say you are at risk.”

A D.C. resident who spoke on the condition of anonymity to protect his privacy said in an interview Friday that he tested positive for monkeypox and was struggling with painful lesions on his face, as well as the psychological toll.

“It just seems like history repeats itself,” he said. “To me this goes back to the early 90s and the AIDS epidemic. . . . Fast forward from then to now and we just have this monkeypox thing. We all got caught with our guard down over this.”

As of Friday, 7,600 residents had preregistered for the vaccine, Ashley said. Among those vaccinated, 99% are male, 99% are gay or bisexual, 76% are 25 to 39 years old, and 76% are White, while 83% are non-Hispanic, he said. As appointments become available, residents who preregistered will receive an email invitation to make an appointment within 48 hours.

About 3,000 appointments opened on Thursday and by Friday more than 2,600 were booked, Ashley said. The vaccine is available in D.C. for District residents who are 18 or older and are men who have sex with men and have had multiple or anonymous sexual partners in the past 14 days; transgender women or nonbinary people assigned male at birth who have sex with men; sex workers, or staff at bathhouses, saunas and sex clubs. Proof of residency is required.

As with the coronavirus, contact tracers are following individuals as well as potential outbreaks.

For example, a bath house in Logan Circle, Crew Club DC, hosted a private event in early June that resulted in some infections. The organizer, Mass Collab, emailed attendees about two weeks later to let them know “a small number of known attendees” tested positive or were contacted by a health department about a possible exposure.

Mass Collab tweeted that private events will be postponed until at least Sept. 21 to allow people to get vaccinated. When events resume, full vaccination will be mandatory.

Outside the District, local public health departments are preparing for another shipment of vaccine, but as of Friday did not know how many doses they would receive or when.

In Maryland, the health department has been allocated 682 doses and, in turn, redistributed 200 doses to the three highest-risk jurisdictions: the city of Baltimore and Montgomery and Prince George’s counties, spokesman Chase Cook said.

In Virginia, the health department received 3,925 doses and 70 doses were administered as of Friday, said Laurie Forlano, deputy director of the office of epidemiology. Health departments in Northern Virginia, where most of the state’s cases are concentrated, have already received some doses, she said.

“The numbers are increasing but it’s hard to say what the trajectory will be,” she said.