The commander of the scandal-plagued California National Guard steps down 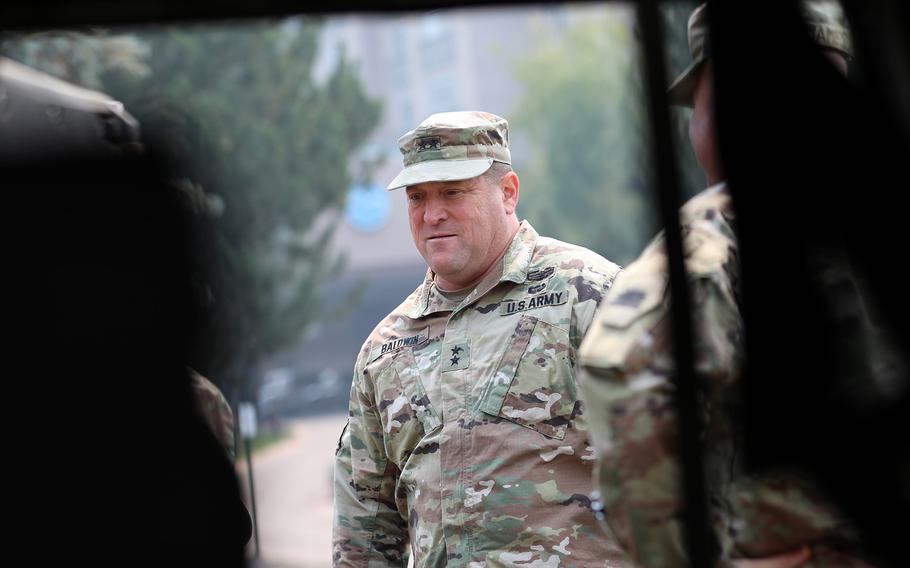 LOS ANGELES (Tribune News Service) — The head of the California National Guard, who has presided over a series of scandals during the last 3½ years, will retire at the end of the month, Gov. Gavin Newsom’s office confirmed Monday.

Maj. Gen. David Baldwin‘s departure comes on the heels of a Times investigation that last month detailed the most recent run of embarrassing episodes for the Guard, including allegations in the officer ranks of abuse of authority, homophobia, antisemitism and racism.

Baldwin, who has led the Guard since 2011 as its adjutant general and reports to Newsom, did not respond to an interview request. After Newsom’s office acknowledged to The Times that Baldwin was stepping down, the governor issued a statement Monday night thanking the general “for his steadfast leadership and nearly four decades of committed service to our state and nation.”

The statement also credited Baldwin for “pushing forward much-needed reforms to change the culture of the organization and better serve Californians,” and said he was instrumental to the Guard’s efforts to train Ukrainian military forces and provide that country with protective gear and medical supplies.

Newsom’s office said Maj. Gen. Matthew Beevers, who is on Baldwin’s executive team, will succeed him as a deputy adjutant general and “the governor will consider appointing an adjutant general.” Beevers did not respond to a request for comment.

The 20,000-member Guard, a branch of the California Military Department, which the adjutant general also leads, serves a dual mission that includes responding to emergencies in the state, such as earthquakes, wildfires and civil disturbances, and assisting U.S. armed forces in military operations overseas.

Upheaval has marked Baldwin’s tenure since early 2019, when a Times report disclosed internal complaints of reprisals against whistleblowers and allegations of a coverup of misconduct in the leadership of the organization. The complaints focused on the Guard’s Fresno air base and included an incident in which someone urinated in a female Guard member’s boots. Baldwin later removed the commander of the Guard’s air side, Maj. Gen. Clay Garrison. The commander of the 144th Fighter Wing at the Fresno base was also removed.

In 2020, in response to another Times report, Newsom’s office denounced the Guard’s decision to send a military spy plane to suburban El Dorado Hills, where Baldwin lived, to help civilian authorities monitor demonstrations over the police killing of George Floyd. Baldwin said the fact that he resided in El Dorado Hills, where the protests were small and peaceful, had no bearing on the deployment of the RC-26B reconnaissance plane.

Last year, Baldwin fired Garrison’s successor, Maj. Gen. Gregory Jones, and suspended Brig. Gen. Jeffrey Magram with pay as director of the air staff and reassigned him to human resources and humanitarian duties. Those actions followed a Times report that Guard members were concerned that their superiors had readied an F-15C fighter jet in 2020 for a possible mission in which the aircraft would fly low over civilian protesters to frighten and disperse them. Baldwin denied that the jet had been prepared for such a deployment, and he said the moves against Jones and Magram had nothing to do with the report.

Magram, who has been a member of Baldwin’s inner circle, is among the officers caught up in the latest round of turmoil.

According to interviews and a confidential report obtained by The Times, the U.S. Air Force inspector general investigated Magram over complaints that he violated government rules by having subordinates ferry his mother on a shopping trip, perform other personal errands for him and complete a part of his cybersecurity training. The investigation resulted in a letter of admonishment for Magram, the Guard told the paper.

After further queries by The Times, however, the Guard said a second investigation of Magram by a state inspector general substantiated similar allegations against him, and he awaits another round of discipline.

The Times also reported that an internal inquiry substantiated allegations that Brig. Gen. David Hawkins made antisemitic and homophobic slurs, including that Jews are unrepentant sinners and that gay marriage is a reason terrorists attack the United States. Hawkins received a letter of reprimand as a result, the Guard said. Responding to a subsequent Times query, the Guard confirmed last month that Hawkins had resigned.

Hawkins told The Times that “those allegations are largely untrue,” and he specifically denied making the statement about terrorist attacks. He said he believed the allegations were lodged by someone who overheard and misconstrued a conversation he had with a chaplain.

Meanwhile, Col. Jonathan Cartwright, a Guard finance officer who was a candidate for general, was arrested in March on suspicion of exposing himself to three women at a restaurant in Arlington County, Va. Police booked Cartwright on a misdemeanor charge, but the case was dismissed Monday for lack of evidence, according to his attorney, Karin Porter.

“He was falsely accused,” Porter said.

An attempt to reach prosecutors late Monday was unsuccessful.

Interviews and Guard records reviewed by The Times show that other alleged acts of misconduct that occurred on Baldwin’s watch include:

— A captain allegedly referred to a Latino sergeant as a “lazy Mexican” and harassed an African American soldier because he was a “Black Lives Matter guy.” Another captain has been accused of asking a Jewish soldier if cigar ashes were his “relatives.” Both captains allegedly falsified physical fitness certifications for Guard members.

— A wing commander for the air side of the Guard faces complaints that she used a military credit card to buy cleaning supplies for her dog and had underlings walk the pet at work.

— The vice wing commander at the same air station was grounded because of a drunk driving arrest.

All of those matters have been the subject of internal investigations, a Guard spokesman said. The status of the inquiries could not be determined Monday.

Current and former Guard members have blamed Baldwin for what they say is a widespread perception in the organization that high-ranking officers who engage in abusive and unethical behavior are protected from significant discipline.

“It’s a great thing that Baldwin’s gone,” said Dan Woodside, a former Guard major who has publicly criticized the organization’s brass. “He’s been there too long, and now there’s not enough top cover for these other commanders.”

Baldwin has denied shielding commanders from discipline. In an earlier statement to The Times, he said, “The bottom line is we have an effective system in place that deals with allegations of inappropriate behavior.”