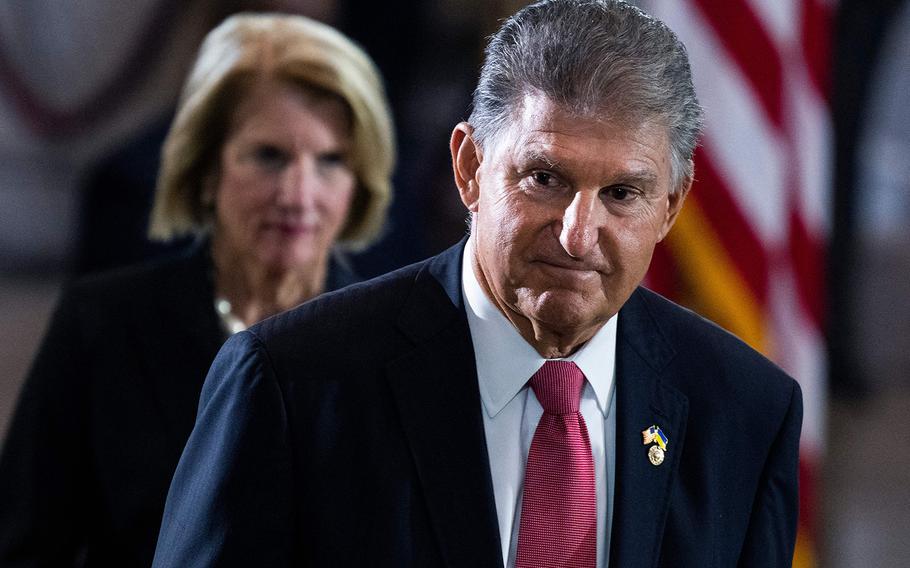 WASHINGTON (Tribune News Service) — Nearly a year ago, Sen. Joe Manchin wrote Fed Chair Jerome Powell to raise alarm that the central bank's policies would overheat the economy, a fixation that made the West Virginia Democrat an outlier in his party.

But with inflation now at a 40-year high, Manchin's concerns have been vindicated — and gave him ammunition to once again thwart a legislative agenda President Joe Biden and the White House had hoped would lift their party's prospects ahead of November's midterm elections.

Manchin privately told Democratic leaders Thursday that he wouldn't support an economic package that included tax hikes and provisions to fight climate change before an August congressional recess, Majority Leader Chuck Schumer's deadline, according to three people familiar with the talks. The move was another blow from the senator against an administration — of his own party — that's weighed down by Biden's poor approval ratings and still smarting from Manchin's torching of the president's signature Build Back Better plan.

The West Virginia senator pulled the plug on expansive legislation addressing multiple Democratic priorities after a report Wednesday that inflation accelerated even faster than economists expected in June, to 9.1% from a year earlier.

"No matter what spending aspirations some in Congress may have, it is clear to anyone who visits a grocery store or a gas station that we cannot add any more fuel to this inflation fire," Manchin said in a statement in response to the report.

Manchin said Friday he'd back July passage of a smaller bill that would only lower Medicare prescription drug prices and extend enhanced Obamacare subsidies. He insisted he's still open to considering other provisions, but only after assessing July inflation data reported next month and the Federal Reserve's response to quickening price gains.

His party already appears resigned to bending to those preferences. Biden urged Congress in a statement Friday to pass the narrow health-care legislation, though he threatened to address climate and energy concerns through executive action if the Senate doesn't also act on those issues.

The argument that the larger package Manchin refused to pass would add to inflation is weak, as the bill would have reduced the federal budget deficit — at his insistence — while raising taxes on the wealthy, sapping them of disposable income.

Manchin has repeatedly bewildered progressives with his stances and tactics, leading Rep. Pramila Jayapal to say this week, "you can't trust him." But thanks to the evenly divided Senate, where Democrats need his vote to advance their priorities over united GOP opposition, he is once again in the driver's seat — not just on Biden's economic agenda, but on climate policy and energy and environmental regulations, too.

"You've got one person who is trying to dictate policy for the entire country," said House Budget Chairman John Yarmuth, a Democrat. "It doesn't matter what we do or what the administration thinks."

The White House responded delicately to the breakdown, conscious of public comments that could further imperil Biden's agenda.

Press secretary Karine Jean-Pierre said Friday she wouldn't discuss the state of negotiations, and Biden himself deflected questions about the West Virginia senator. Asked in a news conference in Jeddah, Saudi Arabia, whether he believed Manchin was negotiating in good faith, the president responded, "I didn't negotiate with Joe Manchin, I have no idea."

Meanwhile, Biden administration officials have slow-walked oil and environment policies, according to people familiar with the matter, both to preserve leverage in negotiations and to avoid angering Manchin, a defender of the fossil-fuel industry whose personal fortune comes from a stake in a coal company.

White House officials often coordinate with agencies on the timing and substance of major energy and environmental policy moves, but in recent weeks, some sign-offs were tethered to considerations about the negotiations with Manchin, said people familiar with the matter.

The way Manchin's priorities loomed large at those agencies is typical of a pattern seen throughout Washington, where Democrats and Republicans privately refer to the senator as "President Manchin" in a nod to his outsize power.

Yet some Democrats regard him as a moderating force as their party becomes increasingly dominated by its progressive wing.

He found Manchin to be a helpful ally in scaling back Biden's initial spending plans, which were heavily influenced by demands from liberals to aggressively fight climate change and bolster the nation's social safety net. "The original ambitions of the plan, $6 trillion, were way beyond our skis," Warner said.

Courting Manchin and catering to his occasionally idiosyncratic views has long made for an intricate task for the White House.

The senator is distrustful of some of the government's own economic projections, including those of the Congressional Budget Office, according to two people close to him. He is far more enamored of the Penn Wharton Budget Model, produced by economists and data scientists at the University of Pennsylvania's Wharton school.

Often, Manchin or his staffers speak directly to analysts there for budget and deficit projections or ask the Penn Wharton staffers to create private models for the senator, the people said.

The director of the Penn Wharton Budget Model, Kent Smetters, was a Treasury Department official under former President George W. Bush and is a scholar with the American Enterprise Institute, a conservative research group. He declined to comment on his conversations with any lawmakers.

Jean-Pierre, the White House press secretary, declined to say whether Manchin gave Biden or his top aides a heads up about his desire to put off negotiations on the economic agenda.

After trying to strong-arm Manchin to embrace a more progressive agenda during the failed Build Back Better negotiations last year, led by Biden, Schumer took the lead this time around. During these latest talks, the White House's policy concerns have moved closer to the senator's.

Already, inside the administration, worries about inflation have put a hold on decision-making on forgiving student loan debt and potentially lifting some tariffs on China imposed by Biden's predecessor, Donald Trump.

Manchin's moment of extraordinary influence won't last much longer. His leverage stems from his pivotal position in the 50-50 Senate, where his party can pass Biden's economic agenda under budget rules without any Republican support only if it hangs together.

Those rules go out the window if Republicans win control of the House in midterm elections in November, enabling the GOP to block any of Biden's priorities when the party takes over the chamber in January.

For now, though, he continues to flex his political muscle.

Talks between Manchin and Schumer for a broader economic package that included tax provisions, climate change, and other items appeared to be on track until Wednesday morning's inflation report.

Hours later, Manchin was asked about the new data and whether it affected his commitment to the legislation. He indicated he was still talking, but said all sides must be "extremely cautious."

He questioned a 3.8% tax on pass-through businesses, under discussion as an offset for the Medicare drug provisions, which Schumer believed already had the support of every Democrat including Manchin. "That's very concerning right now," the senator said.

Just hours later, a reporter asked Manchin what he thought of a scaled-back bill with only the prescription drug provision and Obamacare subsidies. "It would be a big deal," he responded.