The significance of the new Steve Bannon tape 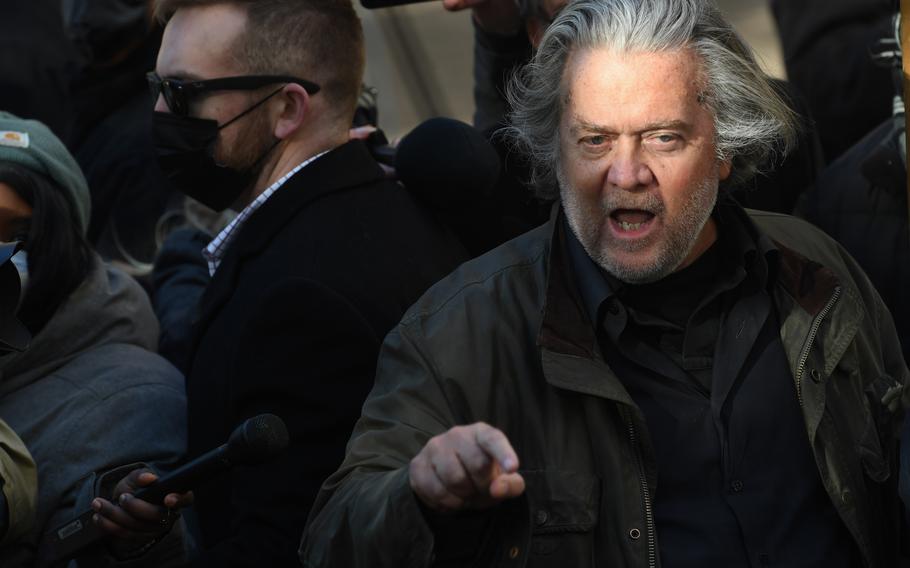 We don't know whether Steve Bannon will ultimately testify for the Jan. 6 committee. It seems pretty likely his offer to do so was a last-minute ploy to avoid criminal liability for flouting the committee's subpoena. The committee reiterated Wednesday that Bannon must deliver the documents it has requested before it will enter into negotiations over testifying.

But there is little question that Bannon could be a significant witness. That was confirmed by a new piece of evidence that landed even as the Jan. 6 committee was holding a hearing Tuesday.

Mother Jones is out with a new Bannon tape from Oct. 31, 2020, in which Bannon talks in detail - presciently, it turns out - about how Donald Trump would claim victory on election night regardless of where the vote count stood.

To be clear, this is hardly the first indication that Trump's false victory declaration was preplanned, nor is it news that Bannon was predicting as much. A day after these taped comments, Axios's Jonathan Swan reported that Trump had told advisers that he would declare victory if it looked like he was ahead at the time - even if the outcome wasn't final. And even as voters were voting on Election Day, Bannon on his podcast publicly echoed his private prediction that Trump would claim victory between 10 and 11 p.m.

But what the new comments add to the record is what Bannon might have viewed as the ends. And just as his prescience about Trump's premature victory declaration and about "all hell" breaking loose on Jan. 6 invite all kinds of questions about just what he knew about Trump's plans, so too does how he described the potential impact of Trump declaring victory.

On the tape, Bannon acknowledged something emphasized in the Axios story and elsewhere: that it was quite possible that Trump would be ahead on election night because his voters were more likely to vote in person, and more Democratic-heavy mail ballots are often counted later - something dubbed the "red mirage." He came out and admitted that Trump would seek to exploit this misleading setup.

"More of our people vote early, that count; theirs vote in mail," Bannon said. "And so they're going to have a natural disadvantage. And Trump's going to take advantage of that. That's our strategy. He's going to declare himself a winner."

Bannon then predicted with apparent glee that this would set off a "firestorm."

"We're going to have antifa crazy, the media crazy, the courts are crazy," he said. "And Trump's gonna be sitting there mocking, tweeting s--- out. 'You lose. I'm the winner. I'm the king.'"

Bannon doesn't come out and describe the utility of this "firestorm" in the comments reported by Mother Jones. What purpose could be served by inflaming antifa and the media, besides stoking grievances that have proven politically useful to Trump? Perhaps Bannon just reveled in the idea of owning the libs.

But there are other, earlier Bannon comments that suggest that perhaps he saw some real, electoral utility in manufacturing such a "firestorm" - and that he had an eye for January 2021 all along.

In an interview with Showtime's "The Circus" released in early October - about a month before these other comments - Bannon predicted that there would be such uncertainty that Congress would be forced to decide the election. Bannon couched it in terms of Democrats supposedly seeking to overturn the election by counting mail ballots that he described as "uncertified," but even that framing suggested that this supposed uncertainty could well be manufactured. And the practical effect was him predicting a situation much like the one Trump would ultimately gun for on Jan. 6.

He even used the same word: "firestorm."

"It's gonna be crazy lawsuits on naked ballots, on every different aspect of it," Bannon said, adding, "With this scale of votes, we'll go into January, and that's when the firestorm starts."

Host John Heilemann pressed him on what seemed like a crazy idea at the time. Was Bannon really saying this would be decided by Congress two months after the election?

Bannon predicted: "Right before noon on [January] 20th, in a vote in the House, Trump will win the presidency."

It didn't get past the night of Jan. 6, but only because Vice President Mike Pence and enough Republicans snuffed out the idea. Trump and Co. weren't able to create enough smoke to convince enough Republicans to go along with their desperate gambit.

Bannon's theorizing didn't come out of nowhere. A few days earlier on his show, a former Trump White House official had talked about just such a scenario. The following day, Trump himself talked about the advantage he could have if it ever went to Congress, by virtue of there being more GOP-controlled congressional delegations than Democratic ones. Trump said, "We have an advantage if we go back to Congress. Does everyone understand that? I think it's 26 to 22 or something, because it's counted one vote per state."

(The House would award one vote per delegation in such a scenario. And at the time, Republicans had majorities of 26 delegations to Democrats' 22 - though that was subject to change in the 2020 election.)

So in total, Bannon predicted Trump's premature victory declaration, which came true. He predicted that all hell would break loose on Jan. 6, which came true. He predicted that uncertainty about election results spurred by a bunch of lawsuits would force Congress to decide the election, which wound up essentially being Trump's plan. And he suggested that unrest was perhaps desirable and/or could be of some utility in all of this, which evidence suggests Trump might well have agreed with on Jan. 6.

We don't know just how much coordination there was between Trump and Bannon, though the Jan. 6 committee noted Tuesday that the two men spoke at least twice Jan. 5, including before Bannon's prediction about Jan. 6. It's certainly possible Bannon was engaging in guesswork. But it also seems possible that he was privy to some of the strategizing about what was to come.

The Jan. 6 committee has focused on proving that Trump was repeatedly told his wild voter-fraud claims were false, in the service of proving he acted corruptly in seeking to overturn the election. What Bannon was saying publicly was that Trump was going to do all of this regardless of the actual results, which suggests that indeed the details really didn't matter to Trump. If that stemmed from talks with Trump and his team, that would drive home the corruptness.

Whether Bannon testifies or not, that's a significant piece of the puzzle.