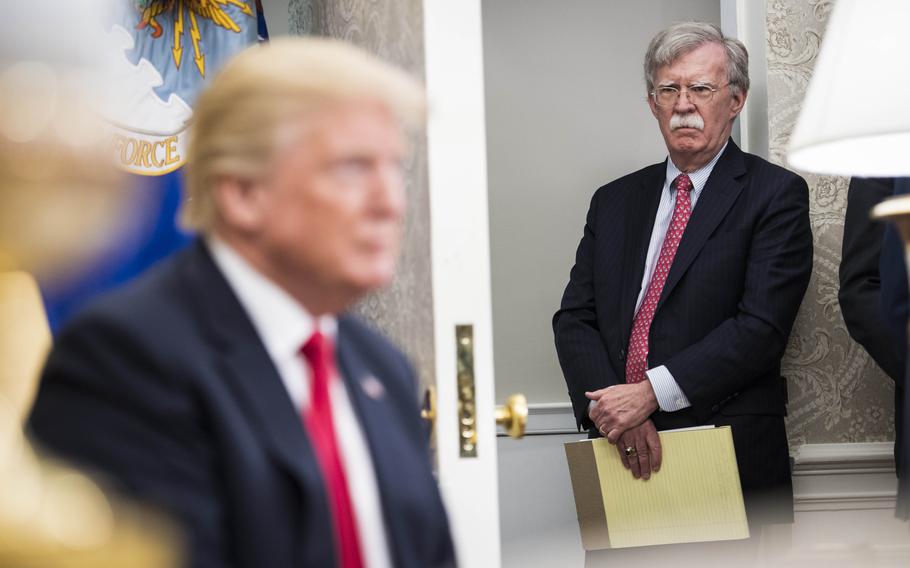 When a former White House national security adviser and U.S. ambassador to the United Nations says he was involved in planning coups abroad, the world takes notice.

John Bolton, speaking to Jake Tapper live on CNN's "The Lead" on Wednesday afternoon, said that the Jan. 6, 2021, attack on the Capitol was not a "carefully planned coup d'etat" - and that he would know.

"As somebody who has helped plan coups d'etat - not here but, you know, other places - it takes a lot of work, and that's not what [Donald Trump] did," Bolton, who served as the top national security official in the Trump administration for 17 months before a bitter exit in 2019, told Tapper.

It was a passing reference, apparently meant as a stinging criticism of the former president rather than a bombshell admission of responsibility.

But clips of the remarks went viral online, drawing millions of views from all corners. Within hours, they had sparked official condemnation and unofficial speculation from foreign observers, especially in parts of the world where decades of U.S. intervention remain fresh memories.

Evo Morales, the former president of Bolivia who was ousted from office in 2019 by the military amid murky election claims, tweeted Wednesday that the remarks showed that the United States was "the worst enemy of democracy and life."

Maria Zakharova, the spokesperson for the Russian Foreign Affairs Ministry, called on Thursday for an international investigation into Bolton's remarks.

"It is important to know in which other countries the United States planned coups d'etat," Zakharova told Radio Sputnik.

Was Bolton serious? Though some in the United States had their doubts, far-flung rivals suggested this was just further confirmation of what they already knew.

"This is no surprise," Chinese Foreign Ministry spokesperson Wang Wenbin said at a daily news conference on Thursday. "The admission simply shows that interfering in other countries' internal affairs and overthrowing their governments have become the standard practice of the U.S. government."

"This is very much part of the U.S. rule book," Wang said.

Bolton did not specify what coups he had been involved in planning, if any, during the interview. When Tapper pressed him, he pointed to the unsuccessful attempt to overthrow Venezuelan President Nicolás Maduro in 2019 but added that the United States did not have "all that much to do with it."

That was a strange example. For one thing, Bolton had said the attempt oust Maduro was "clearly not a coup" in 2019.

Maduro did not offer a response after Bolton's comments Tuesday. But Samuel Moncada, Venezuela's permanent representative to the U.N., jumped on Twitter to respond that Bolton was correct, coups did take a lot of work. "For this reason, he also failed with his local agents in Venezuela," Moncada wrote.

Some international affairs experts said that Bolon's comments could be a setback for well-intentioned U.S. policies.

For America's foreign critics and foes, Bolton often plays the role of a boogeyman, representing the worst of U.S. foreign policy and neoconservative interventionism.

As an official, his hard line views have made him few friends internationally. But he appeared to relish his reputation, writing in one book that being labeled "human scum" by North Korean state media in 2003 was "the highest accolade" he had received.

Bolton had two stints in high positions. Under President George W. Bush, he served in senior arms control roles before becoming ambassador to the United Nations in 2005. He was a major backer of the 2003 invasion of Iraq that toppled Saddam Hussein.

After the Bush years, Bolton spent years in the foreign policy wilderness - though he hardly went hungry, accepting positions at right-wing think tanks in Washington, working with a global private equity firm and serving as a Fox News contributor.

He returned to government office in April 2018 as the Trump White House's national security adviser - its third in less than 18 months.

He didn't last long, leaving the administration in September 2019. Foreign policy appeared to be one major source of dispute, with Trump later tweeting that despite Bolton's reputation as a hawk, Trump actually had "stronger" views on Cuba and Venezuela.

In Turkey, local media supportive of President Recep Tayyip Erdogan linked Bolton's latest remarks to the failed attempt to overthrow the Turkish government in July 2016. Bolton, who was not then in government, was a critic of Erdogan at the time.

Takvim, a pro-government tabloid, print an article Wednesday pointing to statements Bolton made in 2016 in support of the "treacherous" coup attempt. The newspaper noted that Bolton had spoken in support of Kurdish groups in Turkey and neighboring countries.

Takvim pointed to a 2016 appearance on Fox News, during which Bolton argued that Erdogan had been seeking to "recreate the Ottoman caliphate" with an Islamist government. Bolton criticized Erdogan for not supporting the U.S.-led invasion of Iraq in 2003.

"If he goes down, I don't shed any tears," Bolton said "I don't think he's been a friend of the United States."

Bolton has been supportive of coups in the past.

In a 2008 interview with Al Jazeera, he said that coups can sometimes be "a necessary way to advance American interest" and defended the 1953 overthrow of the democratically elected leader of Iran, Prime Minister Mohammad Mosaddegh, orchestrated by the Central Intelligence Agency.

"I think the U.S. should have that capability," Bolton said, referring to Iran and North Korea as two areas that the United States should focus on toppling hostile regimes.

But despite the speculation, on Tuesday, a number of former U.S. intelligence operatives responded with derision to Bolton's remarks.

"Bolton never touched a coup," Milton Bearden, a former CIA station chief who oversaw U.S. covert operations in Afghanistan in the 1980s, wrote on Twitter. "And anyone who thinks fomenting coups is a good idea just doesn't get out enough."