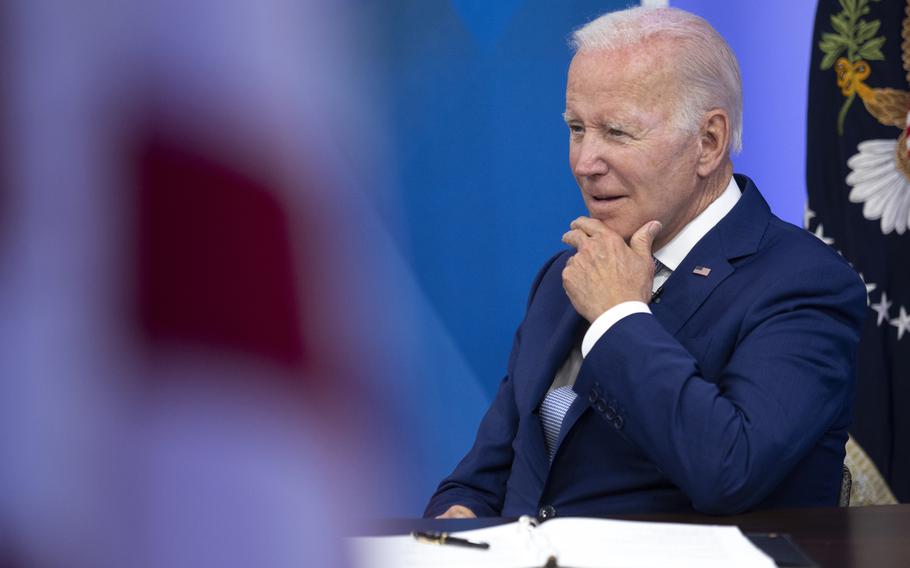 President Biden attends a meeting at the White House on July 11, 2022. (Tom Brenner for The Washington Post)

WASHINGTON - When President Joe Biden took office, one of his key pillars was a pledge to begin "strengthening and empowering the federal workforce."

Yet in 2021, federal workers were broadly less satisfied and less engaged with their work under the avowedly pro-employee Biden administration than they were in their final year under President Donald Trump, according to a study released Wednesday.

An index of job satisfaction and engagement across the federal government fell from 69% positive to 64.5% in the latest annual Best Places to Work in the Federal Government assessment by the nonprofit Partnership for Public Service.

"It's a big drop and we saw that drop across most of the government" with scores down or flat in two-thirds of agencies, said Max Stier, president and CEO of the Partnership.

Stier added in an interview, "President Biden is the first recent president that came out on day one that said 'I value public servants, we care about you, what you do is really important.' And still, we have a government that is just being crushed."

Officials pointed toward two possible contributing factors behind the plunge: Continued turmoil in the federal workforce over the pandemic, and dissatisfaction with appointed leaders - many of whom have yet to be confirmed by Congress.

The assessment is based on an annual poll of federal employees, called the Federal Employee Viewpoint Survey. During the survey period last fall, there was a resurgence in coronavirus infections, plus uncertainty about returning teleworkers to their regular worksites and about a newly issued Biden order generally requiring federal employees to be vaccinated against the virus. (That order has not been enforced due to court challenges.)

"After two years of experiencing a huge amount of work on the covid-19 front lines, responding to completely new missions they had never had to undertake before, at the end of 2021 federal employees had a lot going on," said Loren DeJonge Schulman, the Partnership's vice president for research, evaluation and modernizing government.

Officials at the Partnership and the Boston Consulting Group, which contributed to the study, added that comparable assessments of private sector workplaces also showed declines in the second half of 2021. But even so, one such study calculated a private sector employee engagement score of 79.1, which only 12 of the 71 federal agencies in the rankings exceeded.

"The administration is stepping up with a lot of targeted management fixes in a stressful environment. But the basic fundamental management issues - how do you get good talent in, how do you retain and develop it, how do you pay it effectively, how do you support innovation - those big challenges still remain," Partnership president Stier said.

Employees gave higher marks in the survey to their immediate supervisors, who generally are other career employees, than to senior leaders, many of whom are political appointees. Also, when the survey was conducted, many senior positions still were being filled only on an acting basis; only 55% of nominations requiring Senate confirmation were confirmed by year-end, Stier said.

The drop in scores occurred despite Biden's moves to reorient the federal government toward its employees, including quickly revoking Trump administration disciplinary policies seen as hostile to workers. Biden also restored civil service protections to a large class of employees, increased the role of unions in the workplace, expanded leave entitlements, and made "strengthening and empowering the federal workforce" one of his top management priorities.

Because of changes to the survey since the rankings began in 2003, the decline from 2020-2021 cannot be directly compared with any other point in the survey's history - but it is notable in contrast to the previous year, Stier and other Partnership officials said.

In addition to their engagement and satisfaction scores, ratings for individual agencies include responses to survey questions about leadership, innovation, work-life balance, response to the pandemic and several other issues.

Among Cabinet departments and other large agencies, only the Veterans Affairs Department posted a gain over 2020 - from 70 to 70.2. Even NASA, the top agency in that category for the 10th straight year, fell from 86.6 to 85.1.

The Government Accountability Office led among midsized agencies for the second straight year with a score of 89.8, up by 0.4 points, and the Pension Benefit Guaranty Corporation took over the top position among small agencies despite a 0.5 point decline to 85.6.

At the bottom of those three categories were the Department of Homeland Security, the National Labor Relations Board and the Federal Election Commission, with scores of 56.5, 60.9 and 56.8 respectively.