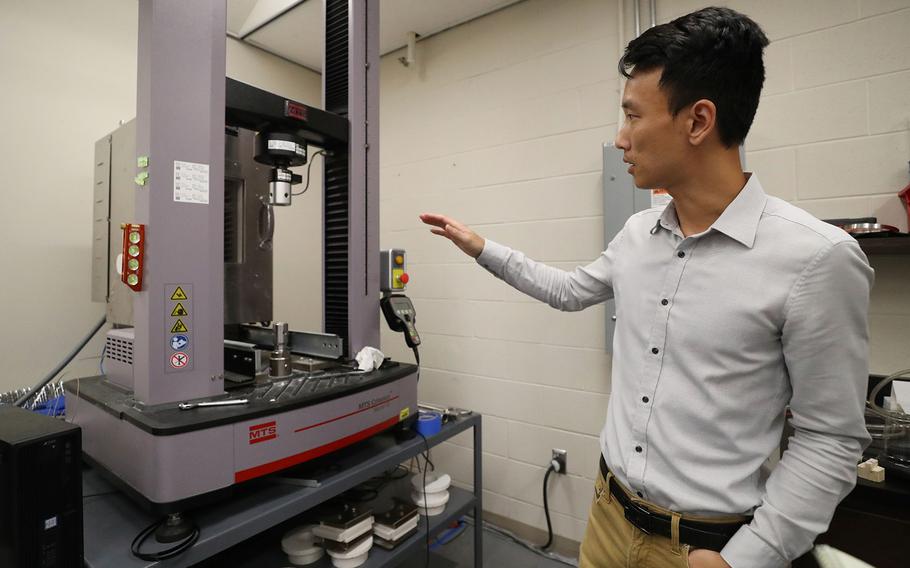 University of Central Florida Assistant professor Kawai Kwok is seen at the Structures & Materials Design Laboratory, on June 22, 2022. Kwok’s work focuses on developing shape-changing structures. These kinds of structures can be used on space missions, for drone work and for solar sails and blades among other applications. (Ricardo Ramirez Buxeda/Orlando Sentinel/TNS)

ORLANDO, Fla. (Tribune News Service) — An army of Knights is among the researchers charging their way into final frontier with innovative projects shaping the future of space travel.

Perhaps it's unsurprising due to the University of Central Florida's history tied to the American space program. As the need for more aerospace engineers rose, the "space university" opened its doors to education in 1968 — the same year the Apollo 8 mission took humans into the moon's orbit.

Since then, students and professors have taken full advantage of being only 35 miles from Kennedy Space Center collaborating with NASA, developing new technologies and techniques straight out of science fiction. In the last 18 months, UCF has had 71 space-related research projects approved and awarded with grants exceeding $10 million, according to UCF spokeswoman Zenaida Kotala.

Some of the research projects include:

—Developing cost-effective and logistically feasible way to mine lunar ice

The projects' vary widely but nearly half of them, 31, are moon-research related.

Most recently, UCF's Kawai Kwok was one of eight UCF recipients to receive the NSF Career award for his research proposal of examining flexible yet strong material capable of performing as a satellite solar sail, and then being able to roll up from the satellite's base as easily as measuring tape.

It's called "snapping instability structures" Kwok said and his idea all started with a stroll through his garden.

Kwok was admiring a ladybug as it flew by. The gentle insect landed on a flower, compacted its wings and nimbly navigated its surroundings. Other than achieving flight, insect wings will conform to the body as the organism sees fit. If it needs to soar, the wings expand. If it needs to crawl under a window, the wings will contract and allow the bug to take on a slimmer form.

"That's exactly the kind of behavior we have been looking for many years in the engineering community. How do we have a structure that can drastically change the shapes?" said Kwok, a 38-year-old assistant professor of mechanical and aerospace engineering.

For the last six years, Kwok has been researching composite lightweight structures for aerospace applications. 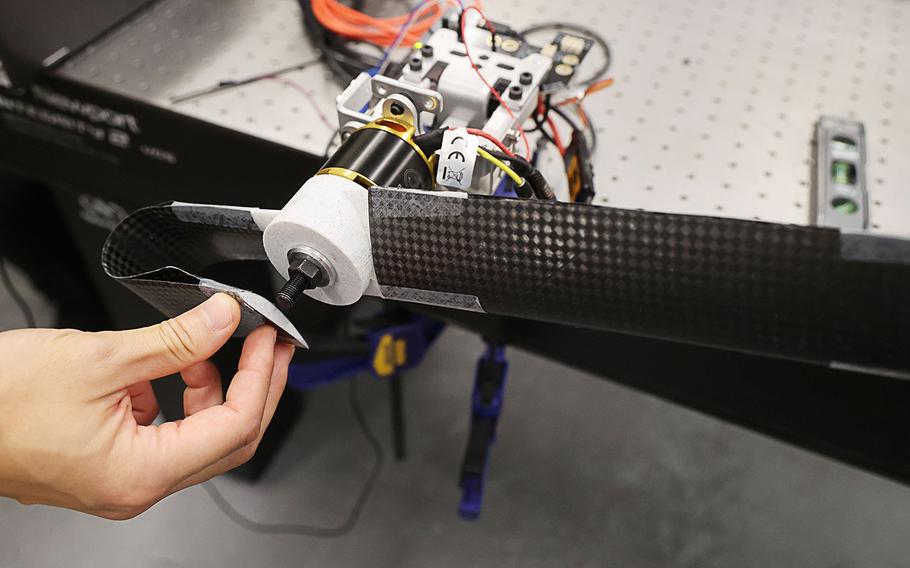 University of Central Florida Assistant professor Kawai Kwok demonstrates a bendable propeller, at the Structures & Materials Design Laboratory, on Wednesday, June 22, 2022. Kwok’s work focuses on developing shape-changing structures. These kinds of structures can be used on space missions, for drone work and for solar sails and blades among other applications. (Ricardo Ramirez Buxeda/Orlando Sentinel/TNS)

His most recent idea of exploring "snap instability" is what earned him a $500,486 NSF CAREER grant, which will allow Kwok and some of his select students to explore different applications of carbon fiber composites — or other lightweight material — that might be able to mimic the behavior of insect wings.

Although, creating material that is both thin and a very strong isn't easy.

Currently, Kwok and his students are working on a .5-meter-long propeller made of a carbon fiber composite. So far, the light and bendable propeller can maintain integrity spinning at 3,000 RPM. Next Kwok wants to move up to a 1-meter-long propeller — the results of which could benefit drone technology. The U.S. Navy has already expressed interest in Kwok's work.

"I guess (the) dream would be (to) design propellers or wings that unfold from a drone. The Navy (would like) to be able to launch a swarm of drones in compact in small tubes," Kwok said.

For the time being, the research is in its early stages and may not end up using carbon fiber, which is cooked up in a small lab at the UCF Engineering Building

"We're not just looking at carbon fiber composites. We're trying to see if we can mix a larger variety of materials with different functions and properties," he said.

Ideally, Kwok's snap instability structures would take on similar characteristics to that of measuring tape, being able to expand greatly while also maintaining structural integrity for technologies such as solar sails for solar-powered space travel. It's an idea that's hasn't truly moved beyond that of science fiction. One of the reason solar sails are hard to create is because they need to be large enough to capture an area of about 20 to 40 meters, to capture photons from the sun, but also maintain an extremely light weight.

"How to fold them into in a way that can can be structurally sound in space? Hopefully, we'll find that answer," Kwok said.

When it comes to the moon UCF shines with its lunar geological expert and planetary scientist Kerri Donaldson Hanna, who has her hands full with numerous moon-related research projects. First, there's project Lunar Trailblazer, which is a satellite capable of scanning and producing high-resolution maps of water on the moon. Donaldson Hanna and her team of students are creating spectral instruments for the NASA satellite.

Water has been long suspected on the moon since the Lunar Prospector probe first detected a high level of hydrogen in the north and south poles in 1999. It is speculated that water-ice exists in the permanent shadows of lunar craters, but there are few actual detections of frozen water. Trailblazer seeks to change that by scanning as low as crater floors and as high as mountain peaks using powerful instruments — capable of measuring all the way down to 3.6 microns — and creating a large database of water sites for future colonization.

Donaldson Hanna's work in Trailblazer has a foundation in two other critical projects she worked on that furthered scientific understanding of lunar geology: NASA's Diviner Lunar Radiometer Experiment and Moon Mineralogy Mapper. The latter flew aboard India's Chandrayaan-1 and discovered water.

Furthering the goal of finding water, Donaldson Hanna is also working as co-investigator on the Lunar Compact InfraRed Imaging System project. She along with an undergraduate student, Adam Bedel, are selecting filters for a thermal camera onboard the XELENE lunar lander, designed by aerospace manufacturer Masten Space Systems. Their work will be used to help make thermal maps of the south polar region of the moon. The images provided by XELENE should give scientists a better understanding of which regions are cold enough to retain water.

Additionally, NASA announced earlier in June that Donaldson Hanna and another UCF planetary scientist, Adrienne Dove, will be exploring an unknown and mysterious region of the moon — Gruithuisen Domes. The area is found on the western part of the moon and appears to be the result of a rare form of volcanic eruption. But that's left NASA scientists confused as such geological structures on Earth require oceans of liquid water and plate tectonics to form.

Enter Donaldson Hanna and Dove who will lead a $35 million mission that would land a spacecraft over the Gruithuisen Domes and provide answers.

"There's potentially a treasure trove of knowledge waiting to be discovered, which will not only help us inform future robotic and human exploration of the moon, but may also help us better understand the history of our own planet as well as other planets in the solar system," Donaldson Hanna told the Orlando Sentinel in June.

UCF's medical campus is the closest med school to Kennedy Space Center, putting it in a unique spot of scientific opportunity. As a result, UCF Health has arranged a partnership with Axiom Space supporting human research studies in future flights including the Axiom 2 mission slated for next year.

Currently, researchers are analyzing data from the April launch that saw a SpaceX Crew Dragon contracted by Axiom Space fly up for a stay on board the International Space Station.

UCF's Dr. Ali Rizvi and Dr. Joyce Paulson are analyzing the microgravity environment's effect on the "blood-brain barrier," or the coated protection around a brain that filters out harmful toxins. Scientists have looked at ways around this barrier since it acts as an obstacle to delivering certain medications that need to reach the central nervous system. The end goal is to to treat degenerative diseases like Alzheimer's or dementia. Previous research has shown the blood barrier can be changed in a microgravity or zero-gravity environments creating larger pores in the barrier and possibly allowing medication to reach the nervous system.

UCF Health professors are collaborating with Israeli researchers to better understand the human body in a microgravity environment by studying the four space participants.

Additionally, another group of UCF scientists is examining the astronauts' eyes and how microgravity may affect the fluid within an ocular structure in a phenomenon known as "spaceflight-associated neuro-ocular syndrome" or SANS. Previous studies have focused on SANS but UCF's research has a new tool at its disposal.

UCF professor Dr. Mehul Patel along with researchers at Israel's Rabin Medical Center are using a new imaging device that will shed light on the structure of the eyes, blood flow and how spaceflight might change them.

After the 17-day trip in space, the astronauts were evaluated within 48 hours of their return. Currently, scientists are reviewing the data for any possible changes.

"This is one of the exciting parts of doing the study," Patel said. "We're going to be able to see microscopic changes, perhaps, for the first time ever, in someone that has left Earth."