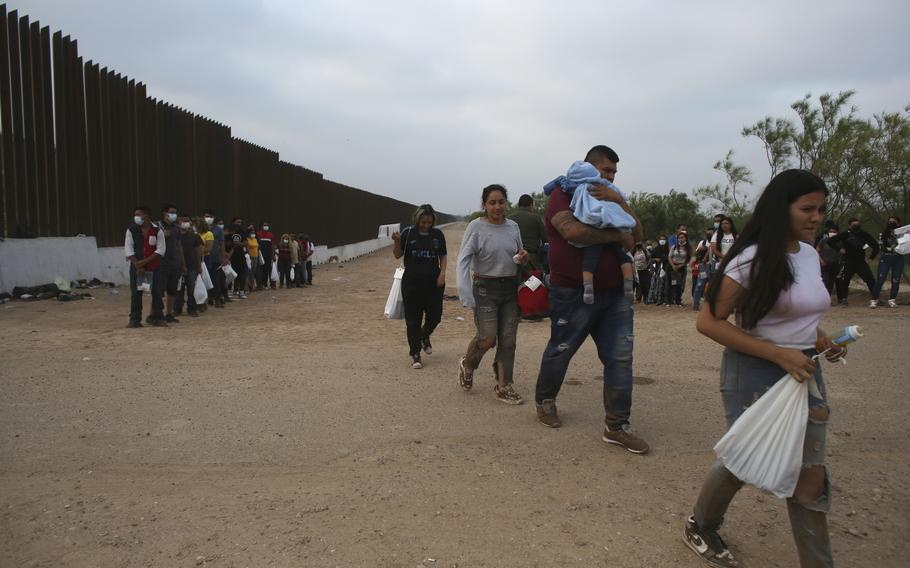 Photos and video of the confrontation brought angry condemnation from President Joe Biden and Democrats who said agents had whipped the migrants, likening the scene to the brutal imagery of American slavery. Biden said the migrants had been “strapped” and punishment would be meted out following a swift inquiry. (Dario Lopez-Mills/AP)

The Border Patrol agents on horseback who confronted Haitian families last September along the riverbanks in Del Rio, Texas, did not strike migrants with their reins but acted inappropriately and lacked proper guidance from supervisors, according to a long-anticipated internal report released Friday.

Widely-circulated images of the incident along the Rio Grande showed U.S. agents swinging reins and screaming obscenities while briefly trying to block families bringing food to a sprawling, chaotic camp where 15,000 migrants arrived requesting entry to the United States.

Photos and video of the confrontation brought angry condemnation from President Joe Biden and Democrats who said agents had whipped the migrants, likening the scene to the brutal imagery of American slavery. Biden said the migrants had been “strapped” and punishment would be meted out following a swift inquiry.

After nearly nine months, the Office of Professional Responsibility at U.S. Customs and Border Protection, which functions as the agency’s internal affairs division, determined in a 511-page report that no migrants were struck or denied their legal right to seek asylum in the United States. But the report found agents used unnecessary force and their decision to assist Texas state troopers’ attempting to block the migrants was in conflict with the Border Patrol’s objectives.

The internal report found “failures at multiple levels of the agency, a lack of appropriate policies and training, and unprofessional and dangerous behavior by several individual agents,” CBP said in a statement.

Federal prosecutors who reviewed the incident announced in March they would not bring criminal charges. The internal report issued Friday did not make specific recommendations for punishment.

Its findings have been sent to a CBP disciplinary review board, and a senior agency official will determine what sanctions, if any, will fall upon the agents, according to CBP officials who briefed reporters Friday. The agents were reassigned to administrative duties following the incident.

Biden condemned the agents last year amid public outcry at scene of horses charging at families and small children running out of the way.

“It’s horrible what you saw. To see people like they did, with horses, running them over, people being strapped, it’s outrageous,” Biden said at the time. “Those people will pay,” he said, referring to the agents. “There is an investigation underway right now and there will be consequences.”

Vice President Kamala Harris echoed those comments in an appearance on ABC’s “The View,” saying the scenes “evoked images of some of the worst moments of our history, where that kind of behavior has been used against the indigenous people of our country, has been used against African Americans during times of slavery.”

Videos footage did not show anyone being struck, but some agents acted in ways that were not in line with official conduct. In one instance captured by Al Jazeera and widely circulated on social media, an agent confronted a man whose family was carrying goods, shouting “Hey! This is why your country’s s---! You use your women for this!”

The incident occurred during a moment of significant strain for the Border Patrol. Over the course of several weeks, thousands of migrants, mostly from Haiti, forded the Rio Grande, camping under a border bridge and building makeshift shelters out of brush.

As water and water in the camp ran low, migrants and vendors began crossing back and forth to Mexico for supplies, which the Border Patrol allowed.

Migrants arriving to the camp were issued colored paper tickets to indicate when they had arrived, and the families crossing back and forth to Mexico for supplies were attempting to show the agents on horseback their tickets as they crossed.

Texas Republican Gov. Greg Abbott, a fierce critic of Biden’s immigration policies, had directed Department of Public Safety troopers to block off a different crossing point along the river by parking their vehicles is a tight formation he called a “steel wall.”

Border Patrol officials agreed with that decision, because the crossing point - across a spillway with dangerous currents - has been the site of drownings, officials said.

On September 19, as migrants bathed in the Rio Grande attempted to reenter from Mexico at a boat ramp area, Texas state troopers attempted to block them. The Border Patrol agents on horseback had been told to assist the state troopers, and when they sought guidance from a supervisor, they were told to help, the report found.

That was not, in fact, what Border Patrol supervisors wanted, having determined that the agency couldn’t adequately supply the camp and migrants should be temporarily allowed to cross back and forth to Mexico for provisions, according to the report.

The horse patrol agents gave “inconsistent answers” to investigators questions about whether the aggressive manner in which they swung their reins was in keeping with CBP training, the report found. They also gave uneven responses to questions about their preparation for crowd control events and operations, it said.

CBP officials who briefed reporters on the findings said the agency’s personnel performed their duties admirably during a time of unprecedented law enforcement and humanitarian challenges. The Del Rio crisis ended after the Biden administration began flying many of the migrants from the camp back to Haiti under the government’s pandemic-linked Title 42 public health policy.

Some asylum seekers were released into the United States, but thousands of others crossed back to Mexico to avoid swift deportation to their devastated homeland.

The Sept. 19 confrontation along the riverbanks occurred on what officials described as the most challenging day of the episode, when crowds were largest, supplies low and tensions high.

Investigators “found multiple instances in which agents acted inappropriately during the incident, including one Border Patrol Agent who was found to have used denigrating and inappropriate language and to have maneuvered his horse unsafely near a child,” the agency said.

The CBP disciplinary review board has proposed sanctions for four agents, according to the statement. Potential punishments for the agents could range from unpaid suspensions to a less-severe “letter of reprimand” noting the improper conduct, according to former CBP officials familiar with the agency’s disciplinary process.

A group of retired Border Patrol chiefs who served under both Democratic and Republican administrations sent a letter last month to DHS Sec. Alejandro Mayorkas expressing concern that the president and vice president’s statements had prejudiced the investigation.

“Every agent and representative of our government should be held to the highest standards of law enforcement and professionalism regardless of the circumstances,” the former officials wrote. “However, due process is paramount to ensure against frivolous claims or undue influence on the process from political, partisan or unaffiliated interest groups.”

“We collectively believe and point out that the statements made by the President and Vice President predictively prejudged the desired outcome of the investigation and may therefore influence the case,” they wrote. “Stating outright that there will be consequences presumes the result of an investigation.”

The Border Patrol union posted statements on Twitter Friday denouncing the Biden administration for “rank hypocrisy,” and called the president, vice president and Sec. Mayorkas “liars.” The union’s top official did not respond to a request for comment, but is expected challenge any proposed disciplinary measures for the agents.