A memorial in front of a playground. A man was killed and two others were wounded near the playground while at a party on Chicago's South Side. (Demetrius Freeman/The Washington Post)

CHICAGO — No new counseling resources are being launched on this city’s impoverished South Side, even after a man was shot to death in broad daylight, feet from a playground, days before July Fourth.

There are no crowdsourced charity drives raising millions for victims’ families in Chicago, where the holiday weekend death toll reached at least 10 with 62 injured — numbers that exceed the toll in Monday’s mass shooting at a July Fourth parade in nearby Highland Park, Ill. In that affluent lakeside suburb, the violence was an anomaly. Here, it is a grimly regular occurrence.

“They have a lot of resources there in Highland Park,” said Bobbie Brown, 62, who watched the nationally televised law enforcement response and community outpouring from her home in the Englewood neighborhood, down the block from where the homicide near the playground happened Friday afternoon. “Ain’t that something? Our babies see people get shot while they’re at a playground, and there’s no counseling. They have to suck it up and deal with it.”

This year’s holiday violence was tame in Chicago compared with the previous year, when more than 100 people suffered gunshot wounds and 17 died, according to Chicago Police Department data.

Brown, a community activist and organizer, describes herself as the neighborhood’s “Big Mama.” She flies two American flags above the front door of her duplex. One is red, white and blue; the other — red, black, and green — is known as the Black Liberation flag. Her property is a neighborhood safe haven, she said. 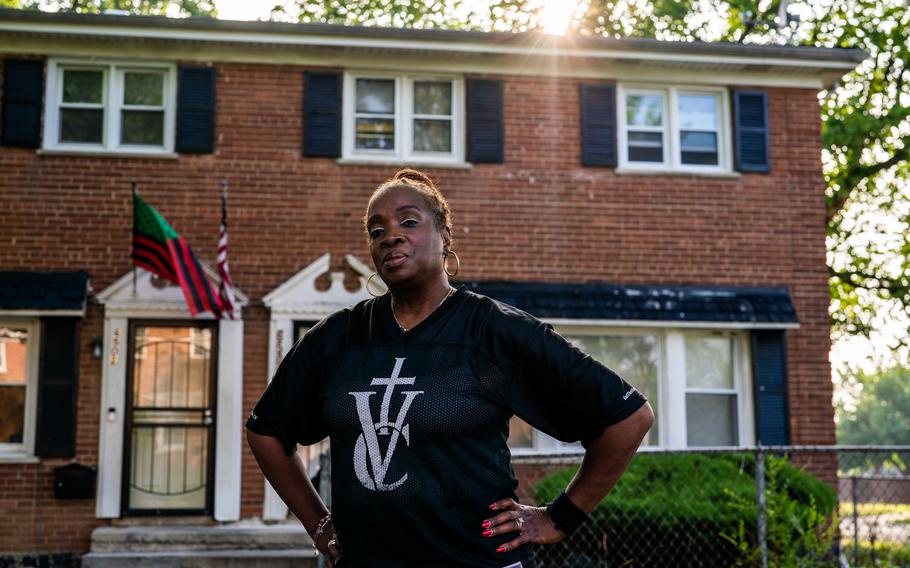 Bobbie Brown, 62, stands outside of her home in South Side Chicago on Wednesday, July 6, 2022. A man was killed and two others wounded while at a party on Brown’s block. (Demetrius Freeman/The Washington Post)

This spring, a young man was shot down the block and came sprinting into her yard, resting on her gazebo deck. As she tried to render first aid, police arrived. She said they watched and waited for an ambulance, their body cameras activated, but did not assist.

“I’ve never seen so much blood in my life,” Brown said. “I looked up at them. No one cares. No one said anything, or even gave me advice on what to do. But they’re recording me.”

A detective later told her the man was pronounced dead at the hospital. Brown did not have the names of the officers who responded to her home, and Chicago police said The Washington Post would need to file a Freedom of Information Act request for details about the response to the incident.

In communities scarred by weekly and sometimes daily violence on the South Side, news of the Highland Park shooting was met with mixed emotions. For many, the rapid response — aided by Chicago police officers lent north — poured salt in very recent wounds.

Champagne Gardner, a 29-year-old nursing assistant, said she was sleeping at her mother’s home in the Grand Crossing neighborhood early Sunday when her mother decided to call the police about the noise coming from a party on her block. With dispatchers on the phone, her mother stepped outside to get the exact address. As she stood in front of the home that was hosting the party, she heard gunshots.

Gardner says it took law enforcement 45 minutes to arrive, despite the nearest police station being one mile away. A 24-year-old man was pronounced dead at the scene, and two women were taken to the hospital with gunshot wounds, police said. Chicago police did not respond to a request for comment.

“It was sad to hear about Highland Park,” Gardner said of the suburb where the median household income is $147,067, according to the 2020 Census. “But at the same time, we’re used to that kind of stuff here. There was a shooting at that same house last year.”

Gardner’s family doesn’t let their young children play beyond their fenced-in backyard in Grand Crossing, where the median household income is estimated at just over $29,000. Likewise for Shermiya, a 35-year-old mother of three who asked to be identified only by her first name out of safety concerns. Taking her children to a July Fourth parade — or any large gathering — in her neighborhood would be unthinkable, she said.

She lives catty-corner to the 6600 block of South Evans Avenue, where at 2:50 a.m. on Tuesday police responded to a report of gunshots. A 31-year-old who was shot six times was taken by ambulance to the University of Chicago Medical Center, where he was pronounced dead. Two other people were treated for gunshot wounds.

Shermiya, a Triton College-trained engineer, drives her three children 45 minutes west each morning during the school year, outside city limits. Her parents live there, and the children use their address to attend school.

The children haven’t been allowed to leave their home on foot — even to play in their yard — since last year, when someone was shot on the nearby street corner. After the police left the area, a young man who neighbors believed to be the shooter approached Shermiya’s 10-year-old son while he was playing out front and asked if he’d seen anything. A watchful neighbor urged the boy to go inside.

“After that it was like, no more playing out here,” Shermiya said. “I don’t allow my kids outside. I don’t have any friends. I don’t come and socialize in this area. I don’t trust it here.”

To her, the Highland Park television coverage served as little more than a reminder that the suburb one hour away exists in a different universe.

“It was on for hours and hours,” Shermiya said. “And it’s like, people are getting shot every day around here, around the corner, up the street. But they still don’t cover it because it’s not enough White people down here.”

J.R., 50, who lives down the block from Shermiya and closer to the site of the South Evans shooting, and who agreed to be identified only by his first name out of safety concerns, said he hadn’t noticed any police or media response at all on South Evans over the weekend.

“We’re ignored here,” he said. “Kids get shot here -- they throw them in the bag and keep on going. But they got the whole SWAT team out there in Highland Park trying to get to the bottom of this sh--.”

Brown was likewise irked by the differences she’s observed in how Black citizens are often treated and the arrest of Robert Crimo III, the suspect in the Highland Park shooting. Officers apprehended him after a car chase Monday evening without using force.

“I didn’t see their foot on his neck,” she said. “They handled him with kid gloves. ‘Turn on over, baby.’ He ain’t dead? Where they do that at?”

To her, the poverty of the inner city and its consequences are intentional. Segregation, redlining, housing discrimination and a lack of public resources have produced a community full of vacant homes and underperforming or shuttered schools, she said. Harper High School, down the street from her home, became notorious for its lack of educational resources, crumbling infrastructure and frequent violence before it was shuttered in 2021.

Brown’s son and daughter both served in the U.S. military, she said. Hers is the only home on the block with an American flag hanging above the front door.

“We were forced here, so I don’t have a country to go back to,” Brown said. “This is my country. They should treat me like it is, but they don’t.”

As Brown spoke on Tuesday afternoon, leftover fireworks banged across the street. She didn’t flinch. While Highland Park witnesses described confusion in the moments after the shooting began, with many mistaking the gunshots for fireworks, there is little confusion here among well-trained ears.

“When it’s a gunshot,” Brown said, “there’s a little bit more oomph to it.”