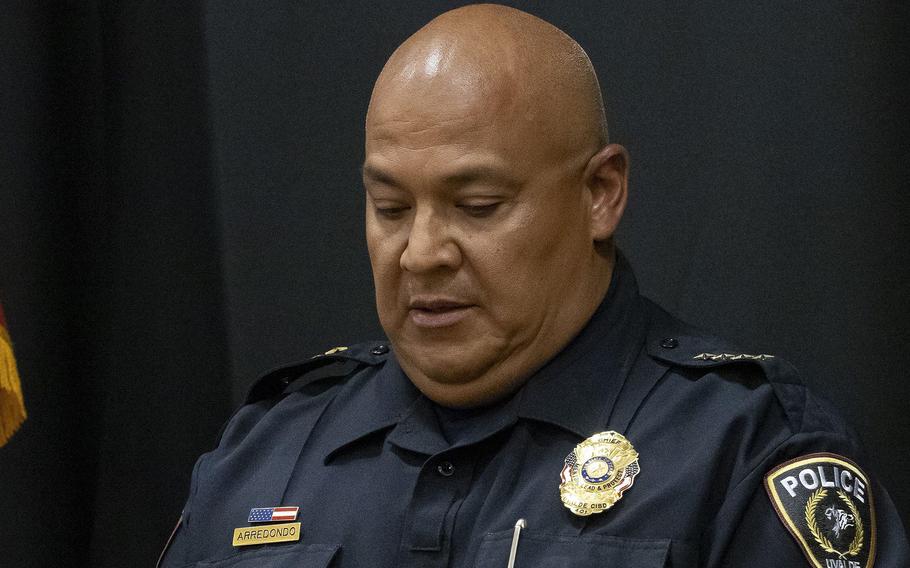 Uvalde Schools Police Chief Pedro “Pete” Arredondo listens during a briefing in Uvalde, Texas, after 19 students and two teachers were killed in the shooting at Robb Elementary School on May 24, 2022. (Juan Figueroa/The Dallas Morning News/TNS)

DALLAS (Tribune News Service) — Pete Arredondo will resign from his seat on the Uvalde City Council, he told the Uvalde Leader-News Friday.

Arredondo, also the Uvalde Consolidated ISD police chief, was elected to the council position May 7 and was sworn into the role on May 31, behind closed doors. The swearing-in came less than a week after the May 24 massacre at Robb Elementary School that killed 19 children and two teachers — the deadliest school shooting in Texas history.

"After much consideration, I regret to inform those who voted for me that I have decided to step down as a member of the City Council for District 3," Arredondo told the Leader-News. "The mayor, the city council and the city staff must continue to move forward without distractions. I feel this is the best decision for Uvalde."

Law enforcement has been widely criticized for the response in Uvalde. Eighty minutes elapsed between the first call to 911 and police confronting the shooter, who fired at least 142 rounds, according to a timeline from Texas Department of Public Safety Director Steve McCraw.

Arredondo said afterward he didn't believe he was in charge of the response. Yet, as one of the first responding officers, those at the scene looked to him for what to do. And he told officers not to enter the classrooms, even though children and teachers were still in danger.

"The only thing stopping a hallway of dedicated officers from [entering rooms] 111 and 112 was the on-scene commander who decided to place the lives of officers before the lives of children," McCraw said.

Arredondo previously asked for an extended leave from the City Council, but was denied the request in a meeting held June 21.

He was placed on administrative leave from his position as police chief June 22.