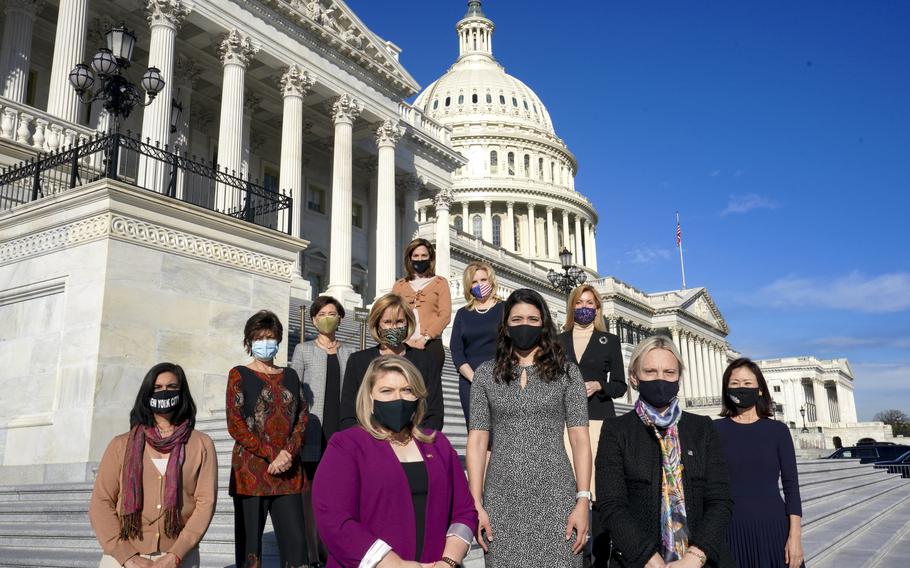 WASHINGTON - Serving in Congress for almost a decade, Rep. Ann Wagner, R-Mo., finally sees the opportunity to move antiabortion legislation that she has proposed one step closer to becoming law.

Rep. Jackie Walorski, R-Ind., is hoping to advance her legislation that would increase reporting about abortion pills, while also beginning to look at what other regulations can be used on such drugs.

And freshman Rep. Julia Letlow, R-La., reminded colleagues last week that the Supreme Court ruling overturning the right to an abortion means that Republicans should go beyond protecting the unborn by also proposing policies that support women and their families.

After last week's Supreme Court ruling, some Republicans leaders immediately called for codifying a nationwide ban on abortion, arguing that it was the logical next step in the right's multi-decade quest to outlaw abortion. But if Republicans retake the House in this year's midterm elections, they will likely need the backing of a key group of lawmakers to enact any new antiabortion legislation: the women in the House Republican conference.

It's something Republican women have done before.

In 2015, House GOP leaders had to pull a 20-week abortion ban bill from consideration after about two dozen Republicans, most of them women, objected to a provision that dictated exemptions would only be given to women who had reported a rape to law enforcement. The likelihood of that bill becoming law also was nonexistent under Democratic President Barack Obama, making it a feckless exercise that could have hurt Republicans in the 2016 election, Republican women said at the time.

"I wouldn't call them 'women's issues,' but they're issues that we live every single day, and I think it's going to bring a breadth and depth to our conference that we haven't seen in a very long time," Wagner said in an interview. "When you come at something as a mother and a grandmother, you come there from a completely different perspective."

There are 32 women in the House GOP conference, the largest number in history after 11 women flipped Democratic-held seats in 2020. And their ranks are only expected to grow: Almost 300 women filed to run in Republican House primaries, according to the National Republican Congressional Committee, at a time when the election cycle is favorable to Republicans. The GOP only needs to net five seats in the midterms to regain the House majority.

But, of the roughly dozen House Republican women who spoke to The Washington Post about current plans, few wanted to discuss the possible legislative implications of the recent Supreme Court decision. Nineteen offices did not respond to requests for interviews.

That lack of detail has not insulated them from criticism from the left.

"I'll put it to you this way: It's an anti-woman, anti-people of color platform. It's taking us back to the days, the heydays, of the KKK without the hoods and where women are people to be controlled. That's their vision for the entire country," Rep. Veronica Escobar, D-Texas, said.

Justice Clarence Thomas wrote in his concurring opinion that the Court should reconsider "substantive due process precedents" decided in landmark cases, specifically those that paved the way for contraceptives access, same-sex marriage and decriminalizing sodomy. Democrats have zeroed in on those comments, accusing Republicans of wanting to impose a nationwide abortion ban without exceptions, limit access to birth control and possibly risk women's lives if they cannot abort ectopic pregnancies ― all questions House Republicans may have to address if they regain the majority next year.

"I mean, every woman should have access to birth control," Rep. Nancy Mace, R-S.C., said in reaction to hearing Thomas's concurrence.

Others were quick to attack Democrats' efforts as fearmongering, without explicitly stating whether the cases Thomas mentioned should be revisited.

"The [majority] opinion was very explicit that it does not go into any of those areas [that Thomas detailed] whatsoever. The opinion couldn't be more plain in terms of some of these other areas," Wagner said. "These are scare tactics, and I find it, frankly, egregious that they're trying to conflate the two."

Most Republican women interviewed were united in their belief that those nuances should be left for state lawmakers to decide.

Asked whether she would support a federal ban on abortion, freshman Rep. Beth Van Duyne, R-Texas, said it's a decision that "belongs in the states." Pressed on whether she supports exceptions in the case of rape and incest, she again pointed to state lawmakers' acting based on what their constituents say is the best course of action.

"I think, at the end of the day, this was a ruling that gave the power back to the states as it should be. That's really, I think, the precipice for this entire discussion," Rep. Stephanie Bice, R-Okla., said. She did not respond to follow-up questions about whether Republicans could codify other restrictions to potentially sweeping antiabortion legislation.

House Minority Leader Kevin McCarthy, R-Calif., also skirted questions during a news conference last week, noting: "The Supreme Court is a separate branch of government. They take their own positions."

Republicans have not introduced legislation that would criminalize miscarriages or bar access to birth control or in vitro fertilization, and several GOP aides, who were granted anonymity to discuss private deliberations within the conference, said there is little support for voting on issues that are not divisive, like access to birth control.

"We've been clear on the pro-life, abortion issues for decades. . . . No current legislation, or anyone in leadership, is for criminalizing miscarriages or banning birth control," one senior GOP leadership aide said.

Several women in the conference have also publicly stated support for antiabortion legislation if it includes exceptions. Earlier this year, Rep. Ashley Hinson, R-Iowa, said she backed a bill in her home state that banned abortions once fetal cardiac activity is detected, but included exceptions for pregnancies resulting from rape and incest or if the life of the woman is at risk. Rep. Kat Cammack, R-Fla., whose mother was advised to terminate her pregnancy for the sake of her health, says she supports rare exceptions for a woman's health and rape and incest when such a circumstance is reported to law enforcement.

Mace, at a roundtable conversation last month, said she has privately heard female colleagues agree with her position, that they would not support legislation if it didn't include such exceptions.

"I can imagine that in a Republican-controlled Congress you'll see some guardrails put in, but I don't think it would be an extremity. I think it would just be guardrails, making sure we have exceptions in there," she said.

Walorski, who was one of the women who had concerns over the 2015 legislation, is co-sponsoring it. The legislation, known as the Pain-Capable Unborn Child Protection Act, is currently being amended by Rep. Christopher Smith, R-N.J., to ban abortions beginning at 15 weeks, down from 20, but it still includes the exceptions that faced backlash seven years ago. Leaders have said the legislation would be one of the first antiabortion bills a GOP majority would consider on the House floor.

Another bill that could be considered is Wagner's Born-Alive Abortion Survivors Protection Act legislation, which would force health-care practitioners to care for a child who survives an abortion. Republicans are also seriously discussing voting on another bill Smith has introduced that would "ban the use of federal funds for abortions or for health coverage that includes abortions"- often referred to as the Hyde Amendment - and also prohibit abortions from being performed at federal health-care facilities or by a federal employee.

As Letlow mentioned moments after the Supreme Court ruling came down, women in the conference are also looking to pursue legislation they consider pro-family. Hinson has stressed the need to expand maternal health access in rural areas, where women often drive significant distance to get care. Rep. Carol Miller, R-W.Va., is looking to tweak provisions in the Social Security Act to help redirect state funds toward online portals that connect families in need to organizations that can provide services, such as churches, foster care and donation centers.

Mace also plans to introduce legislation that would create a first-of-its-kind website, Life.gov, a central location for people all over the country to find family planning services, including where to get birth control, health services and information on how to put a child up for adoption.

Walorski, who could become chairwoman of the Worker and Family Support subcommittee in a GOP House majority, hopes to keep pushing bipartisan work, including reauthorizing funding to help and mentor women in need with young children. She also says her legislation dealing with expanded access to child care and paid family leave is part of a GOP task force's recommendations that Republicans hope to introduce in the majority.

Because control of the Senate is in flux and Biden will still be president, there is a recognition among Republicans that any legislation must be nuanced and likely will need bipartisan support, even if the GOP takes back the House. But Democrats are asking where this bipartisan spirit was when Republicans voted against expanding the Child Tax Credit, increased funding for baby formula, and paid family and medical leave.

"The arsonists now want us to trust them to put out their fire? This is insulting. Republicans have been on a 50-year extremist crusade to snatch away a woman's right to make decision about her own reproductive health. Voters won't be fooled by Republicans' hollow attempts to hide their dangerous plan to ban abortion nationwide," said Helen Kalla, deputy communications director at the Democratic Congressional Campaign Committee.

Right now, Republicans are opting to leave the difficult questions regarding abortion laws to the states. But how far they may go and the barriers the women in the GOP conference may pose to a blanket nationwide ban remains to be seen.

"I think this is just the beginning actually, so states get to make their laws," Rep. Marjorie Taylor Greene, R-Ga., said last week. "I think that's a huge win for the life movement and the unborn and for mothers. So we'll see, we'll see where things go from here."

The Washington Post's Leigh Ann Caldwell contributed to this report.