Lawsuit seeks to stop Charlottesville Lee statue from being melted down 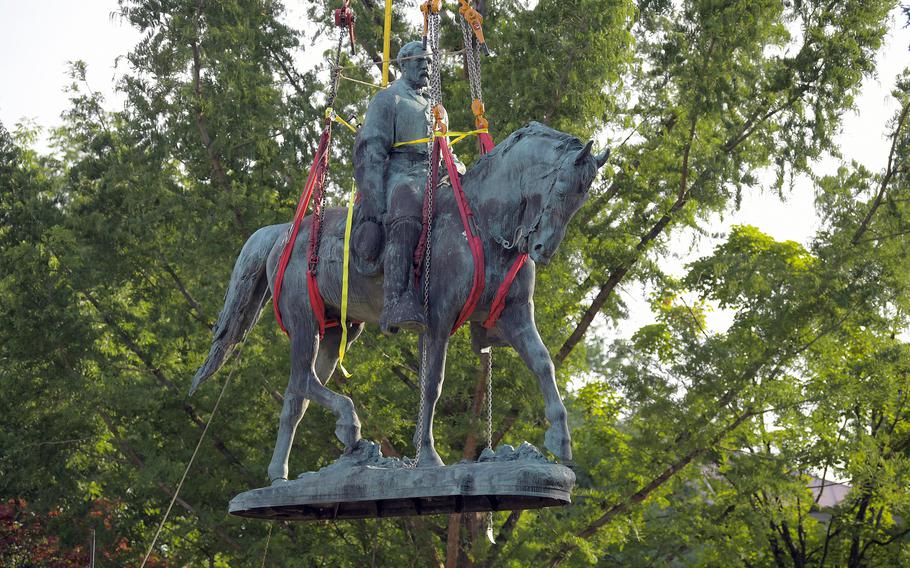 A statue of Confederate Gen. Robert E. Lee in Charlottesville, Va., is lifted off its pedestal in July 2021. (John McDonnell/The Washington Post)

A lawsuit is seeking to block a Charlottesville, Va., museum from altering a statue of Confederate Gen. Robert E. Lee, even though that monument has already been cut into pieces, according to court documents.

The Jefferson School African American Heritage Center wrote in a legal filing this month that it had "disassembled" the bronze sculpture of Lee on horseback, which had stood in a Charlottesville park and been the focal point of the deadly Unite the Right rally in 2017.

What the Jefferson School owns, it wrote in the filing, "is no longer the statue that stood in Market Street Park."

After the sculpture was taken down last year, city lawmakers voted in December to donate it to the Jefferson School, a Black-led museum that planned to melt down the metal and turn it into a new piece of public artwork.

But Andrea Douglas, the museum's executive director, said those plans are on hold amid the lawsuit, a feat that underscores how the Lee statue and its fate have continued to draw stubborn backlash.

The four-year legal battle over whether the statue could be toppled has now given way to a new fight in the courts over what form the bronze sculpture can take, even now that it is off its granite pedestal.

The lawsuit was filed in December against the museum and the city of Charlottesville by the Trevilian Station Battlefield Foundation and the Ratcliffe Foundation, which manages a museum in Russell County in Virginia, the "ancestral homeland" of Confederate Gen. James Ewell Brown Stuart. A judge removed the museum as a defendant, but it remains a party to the suit.

The plaintiffs' request for a temporary injunction to preserve the statue, which is being held in storage in an undisclosed location, has not been granted by a judge.

"We're being accused of trying to erase history when what we're really trying to do is help our city to heal," Douglas said. "It feels like these people are trying to dictate the ways in which Charlottesville responds."

David Dillehunt, a city spokesman, said in an email that Charlottesville generally does not comment on pending litigation. Buddy Weber, a spokesman for the Trevilian Station Battlefield Foundation, and Ralph E. Main, an attorney representing the plaintiffs, did not respond to requests for comment.

The Ratcliffe Foundation was one of several groups or individuals that had filed bids to the city to take ownership of the Lee statue as well as one of Stonewall Jackson that had also been taken down last summer. Lawmakers voted to send the Jackson statue to a contemporary art museum in Los Angeles, which has said it plans to include it in an exhibit next year on the Lost Cause and Confederate monuments.

The two foundations filed a protest letter to the city, claiming that the process for bidding on the statues was "disastrously arbitrary" and that it resulted in a "capricious, illegal award."

Their lawsuit, filed in Charlottesville Circuit Court, alleges that the city violated the Freedom of Information Act, Virginia Public Procurement Act and state code in donating the Lee statue to the Jefferson School.

The plaintiffs have asked a judge to issue a permanent injunction that would force the city to pay to restore and repair the Lee statue to its original state as a sculpture. If it cannot be repaired and restored, they wrote in the lawsuit, the bronze ingots from the statue should be repurposed into a Civil War cannon that will be donated to display on a Civil War battlefield.

But Douglas said filing such a lawsuit was akin to a neighbor trying to stop her from cutting down a tree in her backyard. "It's my tree," she said. "I have the right to chop it down."

The Jefferson Center earlier this year launched a public engagement process to consult Charlottesville residents on what form the bronze should take, including an online survey and a forum in March attended by more than 130 people.

It will use the feedback collected through that process, Douglas said, to create guidelines for artists who could then submit their own ideas. But the museum will not be melting the statue downc, at least not yet.

"We are going to see how this plays out before deciding where we go next," she said. "We feel confident that we will be able to do what we intended to do."

Both plaintiffs are connected to the Monument Fund, a Charlottesville group that fought to keep the statue from coming down in the first place after a vote from city lawmakers.

When city lawmakers first voted in 2017 to take down the Confederate general from his perch at Market Street Park, a group of local residents associated with the Monument Fund sued, citing a state law passed in 1997 that prohibited localities from removing Confederate war memorials.

The plaintiffs in the ongoing case cited the same law, although the Virginia Supreme Court ruled in the first lawsuit that the 1997 statute applies only to monuments erected after the law was adopted.

It was amid the first legal fight that white supremacists descended on Charlottesville in violent protest of the statue's removal in August 2017. One man drove his car through a crowd of counterprotesters, killing 32-year-old Heather Heyer.