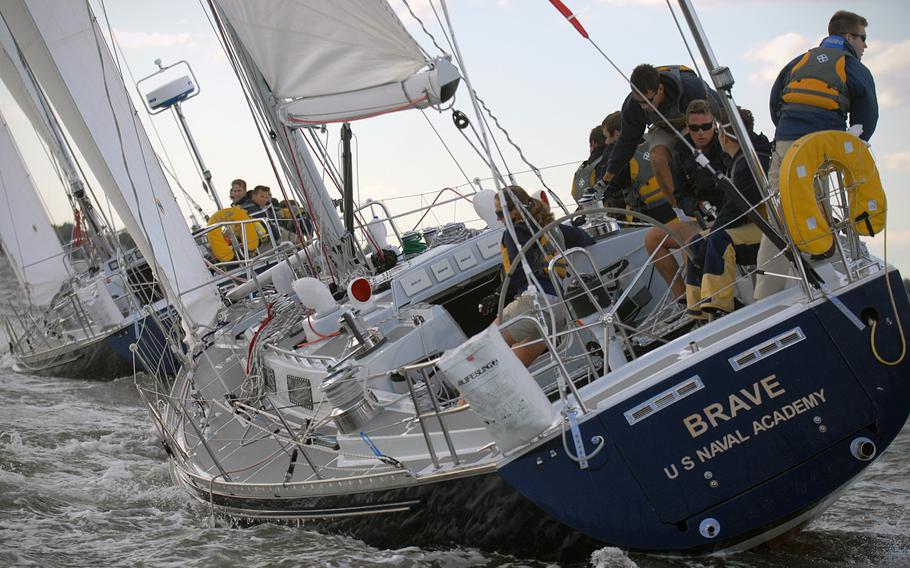 Nothing tests a sailor’s knowledge, skills and resolve like a long distance point-to-point race with a significant amount of blue water miles in the Atlantic Ocean.

Unfortunately, the Midshipmen have not done much of that type of sailing over the past three years because of the ongoing coronavirus pandemic.

That is why Navy varsity offshore coach Jahn Tihansky was worried about entering four boats in the 22nd edition of the Annapolis to Bermuda Race. After all, the Midshipmen had not completed such a passage since the 2019 Marion-to-Bermuda Race.

More concerning was the fact most team members have very little experience out in the ocean. Navy entered six boats in the 2021 Annapolis-to-Newport Race, but that was a relatively straightforward broad reach during the ocean portion of the passage.

“I had a fair amount of trepidation due to the weather, wind and Gulf Stream conditions I knew they would face,” Tihansky said. “While we trained extensively throughout the spring, nothing can really prepare a crew and boat other than time on the water in those conditions, which just isn’t possible to accurately simulate on the Severn River.”

Tihansky need not have been concerned. The Midshipmen responded to the challenge in typical fashion, showing the countless hours practicing maneuvers on the Chesapeake Bay paid dividends.

Ensign Meade Tolen skippered Tenacious to victory in PHRF 1 class, while fellow Navy 44-footers Gallant and Defiance placed third and fourth, respectively. Tolen, who graduated from the academy and was commissioned in late May, was the only member of the four crews to have previously raced to Bermuda.

“I thought all the crews really stepped up and applied everything they learned and boldly competed in the event,” Tihansky said. “They have now begun to truly fill the experience void left by the last couple of years of inactivity.”

Organizers with Eastport Yacht Club delayed the start of the 2022 Annapolis to Bermuda by 24 hours because of concerns about a severe weather system in the Atlantic Ocean. The fleet of 26 boats in seven classes got underway June 4 with the start line set just south of the Bay Bridge.

Tolen said the afterguard aboard Tenacious decided before the start to sail the Eastern Shore side of the Chesapeake to capitalize on a favorable ebbing current along with the building afternoon sea breeze. They quickly tacked into deep water near the shipping channel and held that course for several hours.

When the tide switched Saturday evening, Tenacious tacked to the western shore and picked up a favorable shift that had the boat pointing directly toward Norfolk. After crossing the Chesapeake Bay Bridge Tunnel and entering the ocean, navigator Dylan Medina recommended a course just south of the rhumb line with the knowledge the current would push the boat north.

Tolen said it was a close reach to the Gulf Stream and Tenacious maintained a fast, hot angle while charging through rough seas. “The name of the game was to get out of the stream as soon as we could,” he said.

Tenacious exited the Gulf Stream shortly after Tropical Storm Agatha passed through and Tolen was unsure whether the predicted eddys would still be present. Following a few more days of reaching conditions, the team tightened up and tacked its way to the finish line off Hamilton.

Rising senior Joey Zaladonis served as primary helmsman and Ensign Keegan Steele was executive officer aboard Tenacious which completed the ocean passage more than two hours faster than any other boat in PHRF 1 and almost four hours ahead of sister ship Gallant.

“I believe the biggest contribution to our success in the ocean was our attentiveness to sail selection. For the entire race, but particularly throughout our time in the ocean, we paid close attention to the feel of the boat and made frequent adjustments to ensure we were not sailing too over- or under-powered,” Tolen said.

The Tenacious crew executed more than a dozen headsail changes during the ocean passage, constantly switching back-and-forth between the No. 1 and No. 3 jib. The Midshipmen reefed the main and shook it out just as many times.

“The sail changes got progressively faster with the latter half entailing us sailing without a headsail for no more than a minute. It was hard on the crew, for sure, but it paid off in the end,” Tolen said.

Tenacious crossed the line with an elapsed time of 5 days, 3 hours, 40 minutes and 48 seconds. That transformed into a corrected time of 5:07:34:28 that was just shy of three hours better than runner-up Allegiant, a J/42 skippered by Albert Bossar.

“As a crew, we out-performed all expectations, having been put together just three weeks before the end of our spring season,” Tolen said.

Max, a Pogo 50 skippered by New York Yacht Club member Moritz Ilf, was first to finish among the whole fleet. Florian Linse and Peter Kingham served as watch captains aboard Max, which finished in 4 days, 16 hours, 29 minutes and 51 seconds. Jane Says, a J/124 that was doublehanded by skipper Robert Dunigan and navigator Dan Lawrence, was the second boat across the line just under 10 hours later.

“We were very happy to make it out of the Chesapeake Bay in first place as it was mostly a heavy upwind fight in light air and unknown territory for our team,” said Ilf, who admitted that Pogo crossed the line early and had to restart.

Simon Letort and Tim McDonald teamed up to navigate aboard Pogo, which covered 240 nautical miles during a 24-hour period while reaching in windy, bumpy conditions while on the way and passing through the Gulf Stream. The 50-footer held an 80 nautical mile lead over the nearest boat at one point, but gave considerable time while beating into strong headwinds and powerful countercurrent on approach to Bermuda.