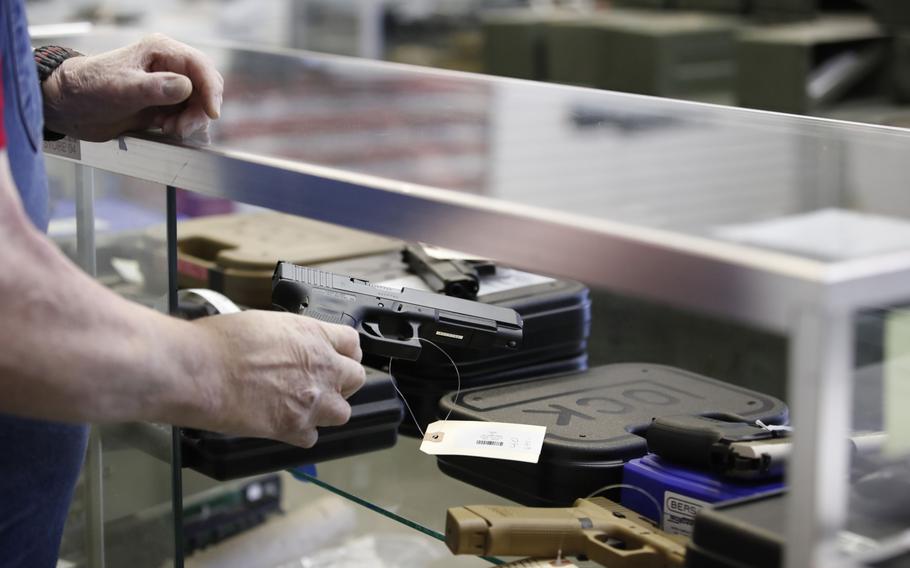 A salesperson takes a Glock handgun out of a case at a store in Orem, Utah, on March 25, 2021. After the Supreme Court’s June 23, 2022, ruling on handguns, some states, including Maryland, may have to revise their gun laws. (George Frey/Bloomberg)

The Supreme Court's ruling this week that Americans have a right to carry a handgun outside the home for self-defense - striking down a New York law that made it illegal to carry a gun in public without proving there was a special need for protection - could mean Maryland will have to change its own similar law.

Under current Maryland law, a gun owner must prove that they have a "good and substantial reason" to carry a concealed weapon. That could include proving they have been threatened and are in danger, showing they have high security clearances, or being a business owner. About 39,000 concealed carry licenses are issued in Maryland.

But on Thursday, the nation's highest court issued its 6-to-3 decision striking down a similar law in New York that requires proof of a special circumstances to carry a gun - a ruling that is likely to impact a number of other states and could make it easier to carry guns in some of the nation's biggest cities.

Many of Maryland's Democratic leaders - who have been active on gun legislation, including banning "ghost guns," which are assembled from parts and sold in kits on the internet without background checks - expressed concern about how the decision will impact already rising crime, while Republicans celebrated the victory as a step in the right direction.

Maryland House Speaker Adrienne A. Jones, D-Baltimore County, and Senate President Bill Ferguson, D-Baltimore City, said in a joint statement that they would be reviewing the opinion, but called universal concealed carry the "wrong answer" to address gun violence.

"We will be reviewing the opinion and, if necessary, pass legislation that protects Marylanders and complies with this brand-new precedent," they wrote.

"If the norm is that people can carry firearms, our neighborhoods, our streets and other public places will become more dangerous," Frosh said in a statement. "The epidemic of gun violence sweeping our nation demonstrates daily the folly of introducing more guns into this boiling cauldron."

Maryland Gov. Larry Hogan, R, did not release a statement on the decision, but candidates vying for the term-limited governor's seat took the opportunity to assert stances on gun control and crime.

"We cannot hand out conceal-carry permits like candy. If and when Maryland's law is struck down, every Tom, Dick or Harry who feels like toting a gun in public will be empowered to do so," former attorney general and Democratic candidate Doug Gansler tweeted. "Make no mistake: that means there will be more guns on our streets, and more guns in the hands of people who shouldn't have them."

Former U.S. labor secretary Tom Perez and Democratic candidate agreed: "The Supreme Court's disastrous decision today to loosen concealed carry safety laws across the country - including potentially here in Maryland - will put people's lives at greater risk. We need to do more to prevent the scourge of gun violence, not less."

"It is unclear what this means for Maryland, but Kelly Schulz supports law abiding gun owners and has repeatedly made her position on these issues very clear," spokesman Mike Demkiw said in an emailed statement. "Maryland has some of the toughest gun laws in the country and that won't change when she is governor."

Some in Maryland have already been fighting the law for years, even suing the state in a lawsuit that had been on hold in the U.S. 4th Circuit Court of Appeals pending the Supreme Court's decision in the New York case. Briefing in the case was scheduled on Friday to begin in August.

Mark Pennak, president of Maryland Shall Issue, one of the groups that filed the suit, said he was ecstatic to see the Supreme Court's ruling on Thursday, calling the implications for Maryland's law "definitive."

"I've been doing this a long time and this is about as clear as I've ever seen it," Pennak said. "It's very clear that the Maryland 'good substantial reason' requirement is blatantly unconstitutional, for the same reason that New York's 'good cause' requirement was unconstitutional, because it gives its discretion to the licensing official."

Pennak said that it's up to the state to take its next steps and either "stand in the doorway and defy the Supreme Court," or remove the requirement. For Pennak and Maryland Shall Issue, he said the work's not done yet.

"Maryland has a whole panoply of other gun control laws which are likely to be unconstitutional in light of the Supreme Court's decision," Pennak said. "And we will be litigating."