Hurricane center tracks 2 systems: 1 in the Gulf, 1 in the Atlantic 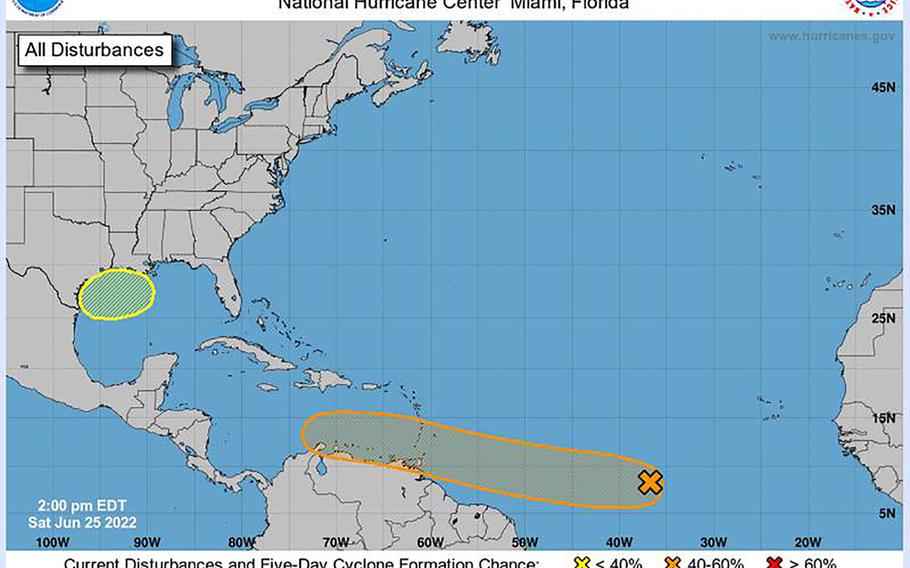 The tropical outlook as of 2 p.m. ET on Saturday June 25, shows two systems with potential for development. (NOAA/National Hurricane Center/TNS) ()

ORLANDO, Fla. (Tribune News Service) — The National Hurricane Center has its eye on two systems with the potential to form into the season’s next tropical depression or storm.

New on Saturday is an area of low pressure that could form early next week in the northern Gulf of Mexico. In the NHC’s 2 p.m. tropical outlook, forecasters said any development would be slow as it drifts to the west over the northwestern Gulf, with only a 20% chance of development in the next five days.

Meanwhile in the eastern Atlantic, a tropical wave that forecasters began tracking this week continues to hold medium chances for development as it marches toward the southeastern Caribbean Sea.

“Cloudiness and showers have become a little more concentrated near a tropical wave located over the central tropical Atlantic Ocean,” said Senior Hurricane Specialist Robbie Berg. “Environmental conditions appear conducive for development of this system over the next few days, and a tropical depression could form during the early to middle part of next week.”

This system is moving from 15 to 20 mph over the Atlantic and expected to approach the Windward Islands on Tuesday.

Forecasters give the system a 30% chance to develop in the next two days, and 60% over the next five.

Officials at the National Hurricane Center’s Tropical Analysis and Forecast Branch believe this tropical wave, which is on the trail of a thin layer of Saharan dust heading west, could be followed by more potential systems. It’s already tracking more tropical waves in the eastern Atlantic off the coast of Africa, but not yet generating forecasts.

If any of the systems develop, they would be the second tropical system of the 2022 Atlantic hurricane season that began on June 1 and runs through Nov. 30.