With an eye on space challenges, new National Space Intelligence Center is activated 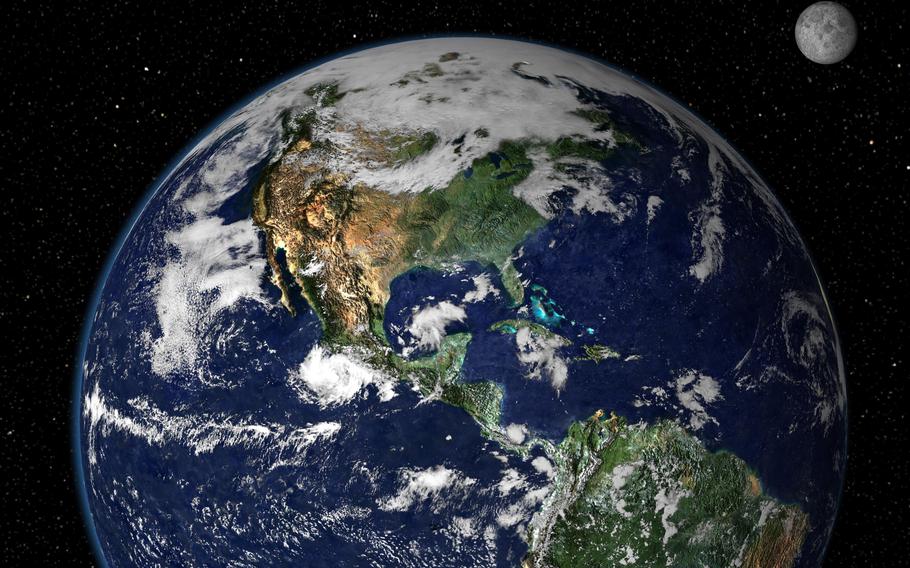 This true-color image shows North and South America as they would appear from space 35,000 km (22,000 miles) above the Earth. The image is a combination of data from two satellites. The Moderate Resolution Imaging Spectroradiometer (MODIS) instrument aboard NASA's terra.nasa.gov/ Terra satellite collected the land surface data over 16 days, while NOAA's Geostationary Operational Environmental Satellite (GOES) produced a snapshot of the Earth's clouds. NASA Identifier: modis_wonderglobe (Courtesy Photo)

The National Space Intelligence Center (NSIC), headquartered at Wright-Patterson Air Force Base, will gather intelligence on what adversaries are doing in space, an arena increasingly important to American military readiness and commerce.

With two squadrons realigned from the National Air and Space Intelligence Center (NASIC), 345 uniformed and civilian NSIC employees will continue to work with NASIC. In fact, many employees reassigned to NSIC from NASIC will continue their duties at their same desks, a Space Force spokeswoman said.

“Space in fact is a warfighting domain,” Col. Marqus Randall, the first NSIC commander, said in an interview with the Dayton Daily News after the center was activated. “For many years, it was considered benign. But obviously, with Russia’s and China’s activity, we know that in fact it is not benign.”

This matters not just to the military, Randall added. Global Positioning System devices, many of them purposed for civilian uses, rely on an array of satellites.

“We must defend and protect those assets,” he said.

It’s possible that the number of people assigned to the new center will grow, but the focus today is establishing the organization, Randall said.

“We are currently under one roof” with NASIC, he said.

While NASIC will continue to have elements devoted to space intelligence, the nation needed a “sharper focus” dedicated solely to space, said Gina Ortiz Jones, undersecretary of the Air Force. She said she and Air Force Secretary Frank Kendall begin each day with an 8 a.m. intelligence briefing.

“Your analysis is directly impacting our investment decisions as we speak,” Ortiz Jones told employees assembled at the Nutter Center.

Avril Haines, the Biden Administration’s director of national intelligence, said space is crucial to communication and overall prosperity. “In the years ahead, that environment will only become more contested,” she said.

Maj. Gen. Leah Lauderback, a former NASIC commander who grew up in Beavercreek, traced NSIC’s roots to NASIC’s predecessor organization, the Foreign Technologies Division, where her father once worked. Lauderback said she expects the new center and NASIC to complement each other.

“I do not see that changing at any time,” she said.

Also known as “Space Delta 18,” NSIC is the 18th member of the nation’s intelligence community.

While he grew up in Mississippi, Randall most recently served as chief of Intelligence, Surveillance, Reconnaissance Resources and Requirements at Space Force headquarters at the Pentagon.