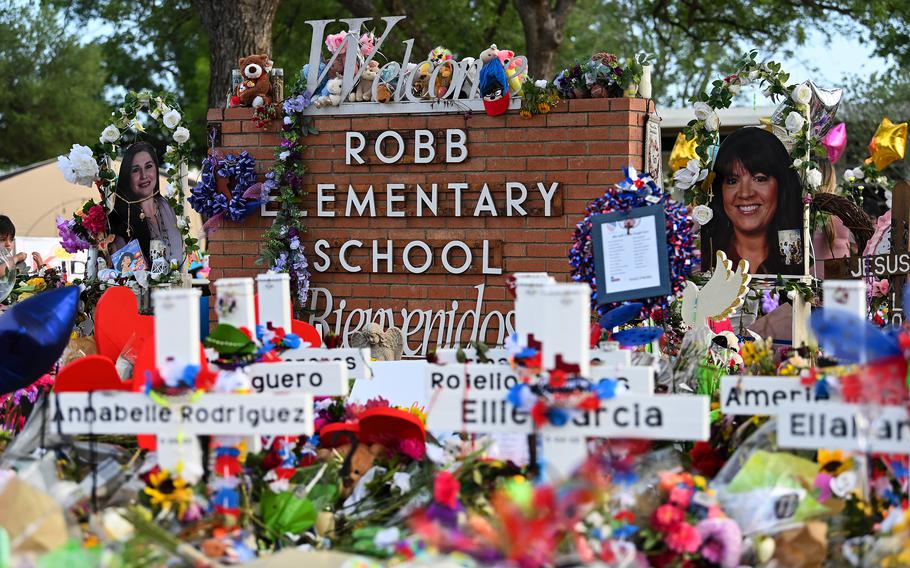 Flowers, balloons, toys and other items are seen May 31 at a memorial for the students and teachers killed in the Robb Elementary School shooting in Uvalde, Texas. (Joshua Lott/The Washington Post)

Officials in Uvalde, Texas, are trying to secure federal funds to demolish the elementary school building where 19 children and two teachers were killed last month, a first step toward heeding a call from parents and other family members that began soon after the massacre.

State Sen. Roland Gutierrez, D, said in an interview Wednesday that the South Texas school district has been engaged in conversations about applying to a federal grant program called Project SERV, which stands for “School Emergency Response to Violence,” to raze Robb Elementary School.

“It’s unfortunate that we’re in this space that we have to have a whole federal grant around this,” he said, “but I haven’t seen one parent that’s in favor of keeping it up.”

The bungled police response to the May 24 shooting — the second-deadliest elementary school attack in U.S. history — has spurred widespread condemnation of law enforcement officials, who took 77 minutes to enter a classroom where children were trapped with an armed attacker spraying bullets.

But there has been little disagreement among local officials and victims’ families about what to do with the structure where the slaughter took place.

At a tense city council meeting Tuesday, Uvalde Mayor Don McLaughlin, R, again said the school building should to be torn down.

“We can never ask a child to go back or teacher to go back into that school, ever,” he said.

He added that the “school will be demolished,” citing his discussions with local superintendent Hal Harrell. A spokeswoman for the Uvalde Consolidated Independent School District, which will decide the school’s fate, did not respond to requests for comment.

Robb Elementary, in Uvalde’s working-class southwest side, has served as a central community space for the Mexican American residents in this city of 15,000. Many of them attended Robb decades ago, when it was considered a “Mexican school” that segregated them from White residents on the east side of the city.

Uvalde school district officials have already indicated that no students would be attending Robb in the fall, though they have been quiet on plans for the actual building. The matter did not come up at a school board meeting Monday night.

Education Secretary Miguel Cardona previously granted the Uvalde district $1.5 million in SERV funds, which are meant to “restore a sense of safety and security” to students and teachers affected by gun violence.

That commitment is specifically meant to fund mental health services and overtime pay for counselors, not construction or medical services, he said in a June 13 letter to Harrell.

Cardona traveled to Uvalde earlier this month to meet with Harrell and Robb Elementary Principal Mandy Gutierrez and attend the funeral for Irma Garcia, one of the two teachers who was killed in the shooting.

“While in Uvalde, I saw the community come together in meaningful ways to support one another and all the families who lost loved ones,” he wrote in the letter. “As a nation, we must do everything we can to support the well-being of our children and educators.”

Previous SERV grants have gone to the school districts overseeing Sandy Hook Elementary in Newtown, Conn., Marjory Stoneman Douglas High School in Parkland, Fla., and Santa Fe High School near Houston, all of which were the site of major school shootings in the past decade.

Gutierrez said that school districts can apply for up to $45 million from the grant program.

Sandy Hook Elementary school was demolished in 2013, a year after a shooting left 20 children and six adults dead. Students at Santa Fe returned to their school building less than two weeks after eight students and two teachers were killed inside it.

The head of the Texas Department of Public Safety on Tuesday criticized the police response to the massacre as “an abject failure.” Steven C. McCraw described in detail how officers quickly made it into the school, carrying shields and weapons, but left children trapped with an attacker as they waited for a key to an unlocked door.

During testimony before state lawmakers, McCraw painted a bleak timeline that outlined repeated police and school security lapses during the May 24 attack.