US must find new tools to defend against China, trade chief says 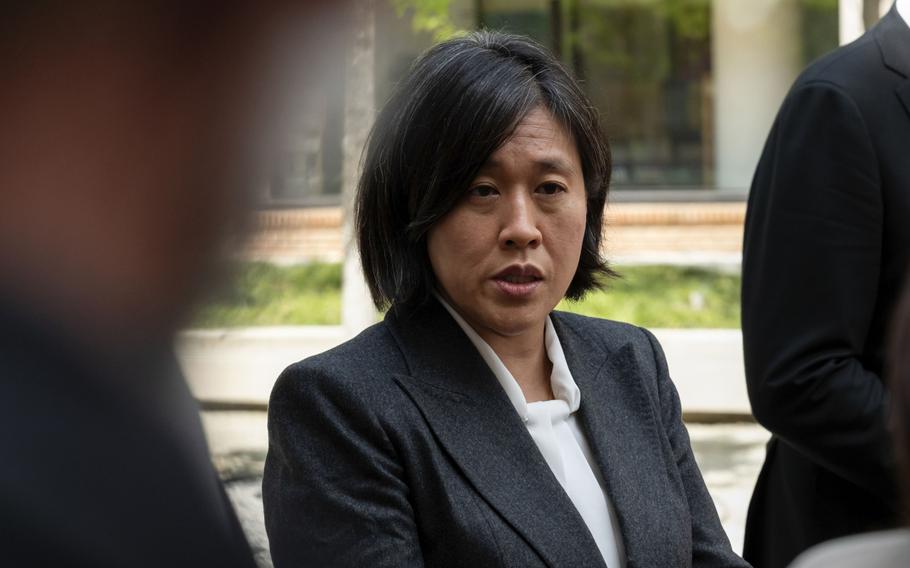 Katherine Tai, U.S. trade representative, speaks to members of the media on the sidelines of the spring meetings of the International Monetary Fund and World Bank Group in Washington, D.C., on April 21, 2022. (Cheriss May/Bloomberg)

The U.S. must use all available tools and develop new ones to defend its economic interests and values against China’s unfair practices after talks showed clear limits to the nation’s willingness to live up to past commitments, President Joe Biden’s trade chief said.

The U.S., through direct discussions with China’s leaders starting in October 2021, pressed Beijing to live up to the so-called phase one trade agreement reached with the Trump administration, U.S. Trade Representative Katherine Tai said in prepared testimony for a Senate panel hearing on Wednesday. But several rounds of “difficult discussions” made clear that the nation isn’t interested in fully following through, Tai said.

“This has become part of a pattern,” Tai said. “The United States has repeatedly sought and obtained commitments from China, only to find that lasting change remains elusive.”

The U.S. now needs to turn the page on the old playbook, she said, repeating previous comments. The U.S. has brought a renewed focus to engaging with partners and allies who are hurt by China’s unfair trade and economic practices, Tai said. Biden recognizes that the U.S. needs to work with allies and partners hurt by China to confront policies that “are fundamentally at odds with the modern global trading system,” she said.

Beijing and Washington fought a trade war from 2018 to early 2020, when they called a truce after China made commitments to increase imports from the U.S. over the next two years. Still, the U.S. kept in place tariffs on more than $300 billion in annual imports from its geopolitical rival, and China’s imports fell short of its purchasing commitments.

Biden’s administration is weighing what to do about the tariffs. While some businesses have benefited from protection from Chinese imports, companies that use the goods as inputs in areas including manufacturing have been hurt.

Treasury Secretary Janet Yellen told lawmakers this month that the Biden administration is looking to “reconfigure” the tariffs and acknowledged that they were contributing to higher prices for goods with U.S. inflation running at the hottest pace in 40 years.

President Joe Biden on Saturday said he’ll be talking to his Chinese counterpart Xi Jinping “soon,” while declining to say when specifically.