Microsoft Corp. said Wednesday it would do more to slow the spread of covert foreign government propaganda in the United States and other countries, starting with stories pushed by Russia to distort the war in Ukraine and to stir fear about coronavirus vaccines.

Brad Smith, the president of Microsoft, the maker of ubiquitous Windows software and Outlook email programs, would use more data, new analytics and additional staff to counter Russia’s success in distributing false narratives through government-owned and government-influenced media. Microsoft has unusual visibility, because most computer owners use one or more of its products daily, including its browsers and web servers.

The Redmond, Wash., company is known for rapid detection and analysis of hacking methods employed by governments against Microsoft users but has trailed Facebook, Twitter and other companies in dealing with the rapid proliferation of geopolitical lies.

Its most significant social network is LinkedIn, a site for career development more than hearing what people have to say about political issues. But as propagandists refine their techniques, they have turned to smaller or upstart platforms, gaming and influencers to spread their messages further. A group of U.S. senators wrote to Chinese-owned TikTok last week expressing concerns about Russian state media promoting misinformation there.

Smith’s commitment came in an introduction to the latest written company report about cyberactivity in Ukraine and elsewhere related to the war. As with previous reports, the document summarized limited cyber strikes at Ukraine targets that would soon be attacked with explosives. The report also said Russian operatives have increased espionage efforts against the United States, Poland and other NATO countries, as well as think tanks, aid groups and suppliers of energy and other critical infrastructure.

The new emphasis on disinformation follows a surge just before and during the invasion, as well as a commitment that Microsoft and other tech companies made to the European Union to promote authoritative sources.

Misinformation operations have been documented by multiple groups and agencies, including via such government-controlled outlets as RT and Sputnik, which are widely followed in Latin America and in nonaligned countries, and more subtle initiatives, such as purportedly independent media in occupied Ukraine.

Microsoft said it had developed a new Russian Propaganda Index that measures user traffic to “Russian state-controlled and -sponsored news outlets and amplifiers” as a proportion to traffic to all news sites.

In its debut appearance, Microsoft said the index showed the proportion of propaganda seen by users in Ukraine tripled in the first weeks of the war and rose by 86% in the United States.

Smith wrote that the Russian influence campaigns are part of the war effort and “combine tactics developed by the KGB over several decades with new digital technologies and the internet to give foreign influence operations a broader geographic reach, higher volume, more precise targeting, and greater speed and agility.”

“Unfortunately, with sufficient planning and sophistication, these cyber influence operations are well positioned to take advantage of the long-standing openness of democratic societies and the public polarization.”

In an interview, Ginny Badanes, a leader of the company’s small counter-disinformation group, said Microsoft would not limit itself to countering Russia or to wartime propaganda. But she said those were good places to start and that she hoped that by reporting on the big picture Microsoft and its subsidiaries see, the company would inspire others to work outside of lanes devoted to messaging, hacking or military activity.

“We hope that the result of this report is others starting to think about breaking down silos,” Badanes said. “We need to be thinking about this from a national security perspective.”

She said that her group, called Democracy Forward, has “a couple handfuls” of main staff and help from within various company units. She said staffers will study control and distribution, rather than content, and get help from outside groups that track media ownership.

Already, it has been promoting news stories from Ukrainian outlets when readers search for news that has been the subject of Russian government-directed information. It is considering attaching “state-sponsored” or similar labels when appropriate.

Microsoft said it would issue its first transparency report on its effort and their effectiveness later this year. 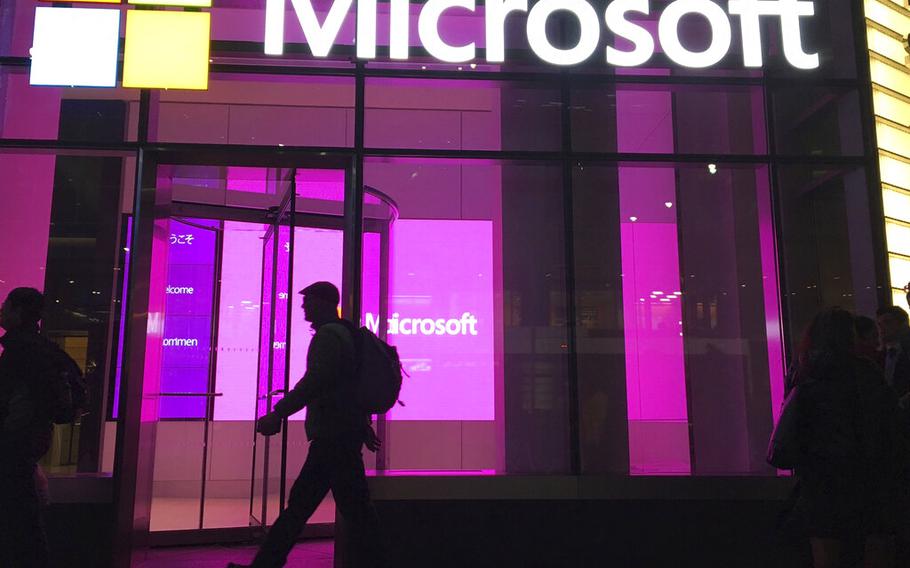 Brad Smith, the president of Microsoft, the maker of ubiquitous Windows software and Outlook email programs, would use more data, new analytics and additional staff to counter Russia’s success in distributing false narratives through government-owned and government-influenced media. Microsoft has unusual visibility, because most computer owners use one or more of its products daily, including its browsers and web servers. (Swayne B. Hall/AP)