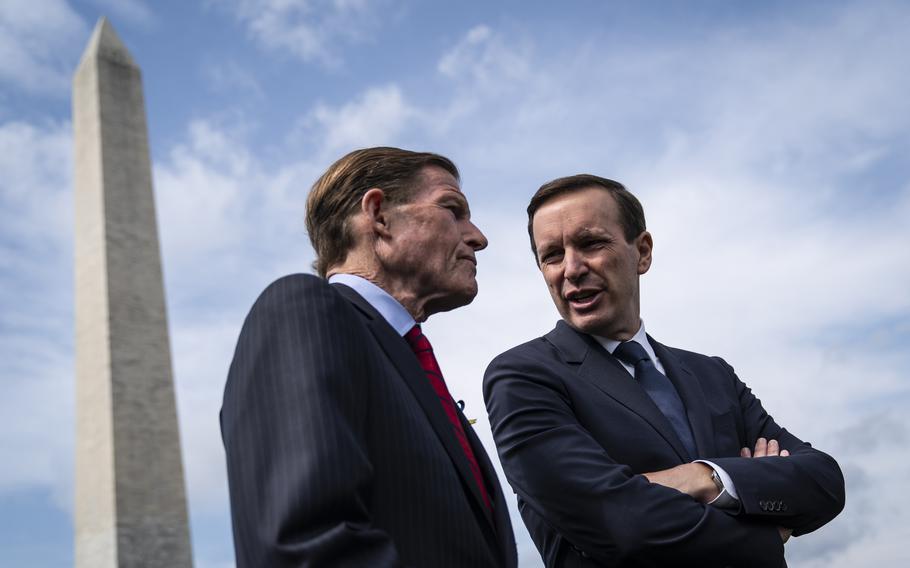 Sen. Richard Blumenthal, D-Conn., and Sen. Chris Murphy, D-Conn., speak at the opening of a gun violence memorial installation on the National Mall on June 7, 2022, in Washington, D.C. Murphy has led Senate negotiations on a bipartisan response to recent mass shootings, an effort in which Blumenthal is also participated. (Jabin Botsford/The Washington Post)

WASHINGTON — The Senate advanced a bill Tuesday night that would toughen federal gun laws and provide billions of dollars in new money to prevent future mass shootings after negotiators settled key disagreements, putting the legislation on course to be passed into law later this month.

The breakthrough came more than a week after 20 senators — 10 from each party — signed on to a framework agreement that coupled modest new gun restrictions with some $15 billion in new federal funding for mental health programs and school security upgrades. The release Tuesday evening of the 80-page Bipartisan Safer Communities Act concluded a crash effort to translate those elements into fine legislative detail, one that appeared to be in jeopardy late last week.

Tuesday’s 64-to-34 test vote, which took place less than two hours after the final text was circulated, put the legislation on a path to pass the chamber by the end of the week. Key players on the political right took sides immediately after the text was released, with Senate Minority Leader Mitch McConnell, R-Ky., backing the bill and the National Rifle Association opposing it.

The leaders of the small bipartisan group that forged the deal, meanwhile, called it a watershed moment in Washington’s long struggle to address high-profile acts of mass gun violence. The group, led by Sens. John Cornyn, R-Texas, and Sen. Chris Murphy, D-Conn., came together in the hours after the May 24 killing of 19 children and two teachers inside a Uvalde, Texas, elementary school.

Cornyn, too, acknowledged the compromise was likely to leave those on both extremes of the political spectrum dissatisfied. But he said the time had come for lawmakers to heed the public’s calls for action: “We know there’s no such thing as a perfect piece of legislation. We are imperfect human beings. But we have to try, and I believe this bill is a step in the right direction.”

If passed, the Bipartisan Safer Communities Act would enact the most significant new gun restrictions since the 1990s, though it falls well short of the broader gun-control measures that President Biden and other Democrats have called for, such as a new assault weapons ban or restrictions on high-capacity ammunition magazines.

One sticking point resolved over the weekend concerned the “boyfriend loophole” — a gap in current federal law thatprevents domestic violence offenders from purchasing firearms only if their victims were either their spouses or partnerswhom they had lived with or had children with. The framework proposed expanding restrictions to include offenders who have been in a “continuing relationship of a romantic or intimate nature” with their victims.

Defining precisely what constitutes such a relationship, however, was challenging, as was addressing GOP desires to create a process allowing offenders to have their gun rights restored. The bill released Tuesday would bar a misdemeanor domestic-violence offender who has a “current or recent former dating relationship with the victim” from owning or buying a gun.

What constitutes a “dating relationship” is not precisely defined in the draft text, which would instead allow courts to make that determination based on the length and nature of the relationship, as well as “the frequency and type of interaction” between the people involved. The text excludes “casual acquaintanceship or ordinary fraternization in a business or social context.”

Those offenders would be automatically entitled to regain their gun rights after five years as long as they do not commit any further violent misdemeanors or other disqualifying offenses.

Negotiations over the legislation bumped up against a self-imposed deadline of getting the bill written and onto the Senate floor this week so that it can be debated and passed before a scheduled two-week recess that begins Thursday. Although leadership aides say that senators could stay a day or two longer to complete work on the bill, a longer delay has been seen as untenable by senators of both parties.

Despite the broad public popularity of the gun provisions in question, Republicans are facing a brewing backlash from the most conservative elements of their voting base.

Democrats, for their part, are wary of getting mired in protracted negotiations due to deep skepticism of the GOP’s willingness to consummate a gun deal. They also fear that it could sap political capital from their other priorities this summer - including a possible resurrection of Biden’s party-line economic agenda, previously known as Build Back Better.

After their last in-person meeting Thursday, the four lead negotiators — Cornyn, Murphy, Kyrsten Sinema, D-Ariz., and Thom Tillis, R-N.C. — pledged to work throughout the weekend to bring a deal to fruition.

Murphy, the lead Democratic negotiator, struck an optimistic note, saying progress continued. “We’ll find a way to get this done,” he said. But Cornyn, the lead GOP negotiator, publicly took a harder line, telling reporters on his way out of the room that he was “done” negotiating on key sticking points before he left for Texas for the weekend.

The next day, in Houston, Cornyn was heartily booed as he gave a speech to the Republican Party of Texas’s annual convention — a vivid public display of the considerable political risk he and other Republicans are assuming by merely floating a deal to tighten federal gun laws.

While the subset of party activists who attended the event is not representative of the electorate as a whole, in Texas or elsewhere, the episode illustrated some of the political forces that have made it difficult to forge a compromise on new gun laws over the past three decades — despite the public outcry over the recent spate of mass shootings and persistent street violence involving firearms.

“I will not, under any circumstance, support new restrictions for law-abiding gun owners,” Cornyn told the crowd at the Houston convention. “And despite what some of you may have heard, the framework that we are working on is consistent with that red line.”

The crowd booed nonetheless. Social media postings captured attendees chanting “No red flags!” — a reference to a provision of the tentative deal that is particularly unpopular on the right — as well as garbage cans full of Cornyn lanyards. The state party also adopted a resolution opposing the deal and rebuking the GOP senators involved, on the grounds that “all gun control is a violation of the Second Amendment and our God-given rights.”

As the talks wore on last week, there was reason to think the deal could remain insulated from a right-wing backlash. For one, the framework won tentative backing last week from McConnell — an important public vote of confidence from a powerful GOP player who has played a key role in snuffing out previous attempts at compromise. Of the 10 Republicans who signed onto the framework last week, four are not seeking reelection, and five others are not up for reelection until 2026.

McConnell on Tuesday lent the bill firm support, calling it “a commonsense package of popular steps that will help make these horrifying incidents less likely while fully upholding the Second Amendment rights of law-abiding citizens.”

“For years, the far left falsely claimed that Congress could only address the terrible issue of mass murders by trampling on law-abiding Americans’ constitutional rights,” he said. “This bill proves that false.”

Yet McConnell, who rarely finds himself out of step with fellow GOP senators, was solidly in the minority among Republicans in supporting the deal. The NRA’s immediate decision to oppose the bill Tuesday after it was released underscored the firm commitment among conservatives to a hard-line defense of gun rights.

The bill, the group said, “falls short at every level.”

“It does little to truly address violent crime while opening the door to unnecessary burdens on the exercise of Second Amendment freedom by law-abiding gun owners,” the NRA statement continued.

Meanwhile, gun-control advocacy groups quickly endorsed the bill, calling it a breakthrough moment while acknowledging that its provisions were relatively modest.

John Feinblatt, president of Everytown for Gun Safety, said the bill’s release moved the country “one big step closer to breaking the 26-year logjam that has blocked Congressional action to protect Americans from gun violence” and urged the Senate to quickly pass it.

Besides the “boyfriend loophole” issues, another tricky area concerned federal grants to states that Democrats have publicly pitched as an effort to encourage red-flag laws, which allow authorities to keep guns away from people judged to represent a danger to themselves or others.

Many conservatives are deeply skeptical of those laws, so Republicans insisted on structuring the grants so that the money would be equally available to states that pass red-flag laws and those that do not.

According to a summary of the draft bill, an existing Justice Department grant program would be expanded to allow funding for state “crisis intervention programs,” including not only red-flag laws but also drug courts and veterans’ courts. The bill provides $750 million in new funding for those programs, the summary said.

The third major gun provision concerned how background checks are handled for gun buyers under 21. While that group is already barred from purchasing handguns, people 18 or older can still buy rifles and shotguns, including the military-style semiautomatic rifles that have been used in numerous recent mass shootings.

The framework deal included an agreement to require a search of juvenile justice and mental health records for the youngest gun buyers for the first time. But because of disparate state systems and standards for searching and maintaining juvenile records, negotiators struggled with the mechanics of that provision.

The bill will include an “enhanced search” window for gun buyers under 21, to allow local authorities to scour confidential databases, according to the bill summary, with a total of 10 business days available to complete a review of those young buyers if an initial search raises a potentially disqualifying issue.

While that structure stands to be especially contentious for gun rights advocates, who have long opposed the prospect of creating a de facto waiting period for purchasing a gun, the “enhanced search” provision is set to expire after 10 years — after which, the bill’s architects envision, juvenile records will be routinely incorporated into the existing instant background-check system.

Other provisions include new federal gun-trafficking offenses and a broader definition of which gun sellers are required to register for a federal firearms license, which in turn would require them to conduct background checks on their customers.

Other elements of the framework included creating a broader network of “community behavioral health centers,” more federal support for in-school intervention programs, broader access to telehealth services for those in a mental health crisis and new funding for school security programs.

The new spending is offset through a one-year delay of a Medicare drug-rebate provision. According to the bill summary, the federal savings are estimated at $20.9 billion, which is being used to fund more than a dozen new mental health and school security programs. A Republican aide familiar with the negotiations who spoke on the condition of anonymity to candidly describe the talks said the bill will not spend the full offset, only up to $15 billion.