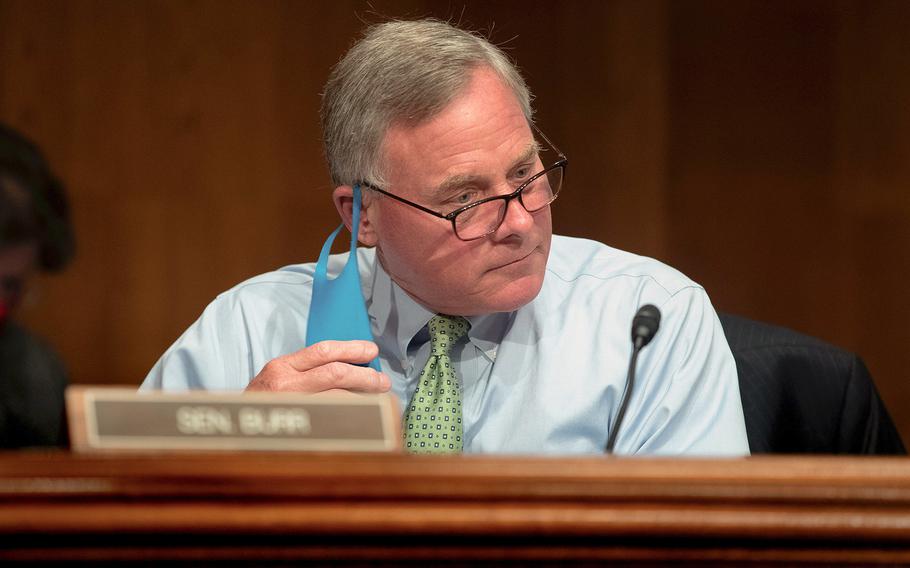 Sen. Richard Burr, R-N.C., attends a hearing on Capitol Hill in Washington, D.C., on June 23, 2020. The Justice Department on Friday, June 17, 2022, made public a search warrant it used to obtain Burr’s cellphone in 2020 as part of an investigation into his stock trades at the start of the COVID-19 pandemic. (Michael Reynolds/POOL/AFP/Getty Images/TNS)

WASHINGTON (Tribune News Service) — The Justice Department on Friday made public a search warrant it used to obtain Sen. Richard M. Burr’s cellphone in 2020 as part of an investigation into his stock trades at the start of the COVID-19 pandemic.

The department released the search warrant and accompanying affidavit in response to a lawsuit brought by the Los Angeles Times. Much of the affidavit was heavily redacted and provided few insights into the evidence the FBI had gathered and used to obtain permission from a federal judge to seize the phone.

Justice Department attorneys argued in court papers filed Friday that much of the information should remain blacked out, in part, because it includes “extensive details of interviews with private third-party witnesses whose role in the investigation is not publicly known.” The Justice Department, which had fought the disclosure of the records for more than a year, lost a recent key appeals court ruling that set the stage for their release.

The fight over the records stems from a federal investigation that began in 2020 into whether Burr, a North Carolina Republican who is not running for reelection, illegally used information from congressional briefings about the coronavirus to sell $1.65 million in stock just before the pandemic hit. Burr was never charged with any crimes connected to the trades.

The Times first reported in May 2020 that federal agents, relying on a search warrant, had obtained Burr’s cellphone as part of their investigation. The Justice Department confirmed in its court filings on Friday that it dropped that investigation in January 2021. A month later, the Times filed its lawsuit, arguing the records should be made public.

A federal appeals court in March overturned an earlier ruling by Chief U.S. District Judge Beryl Howell that had blocked the public’s access to the search warrant, citing Burr’s right to privacy. The court ruled that Howell had misapplied the law in her May 2021 order and did not take into proper account the public’s interest in the materials.

Howell last month ordered the Justice Department to make public a redacted version of the materials and explain why parts of it should remain sealed.

A lawyer for Burr and a spokesman for the U.S. Attorney for the District of Columbia did not immediately respond to a request for comment Friday.

Attorneys for The Times, who work for the Reporters Committee for Freedom of the Press, did not immediately respond to requests for comment.

Burr was one of several senators — including California Democrat Dianne Feinstein — whose sale and purchase of stock at the start of the COVID-19 pandemic were scrutinized by the Justice Department for potential violations of a congressional insider trading law. But his was the only case in which warrants were obtained. All investigations were closed without charges being filed.