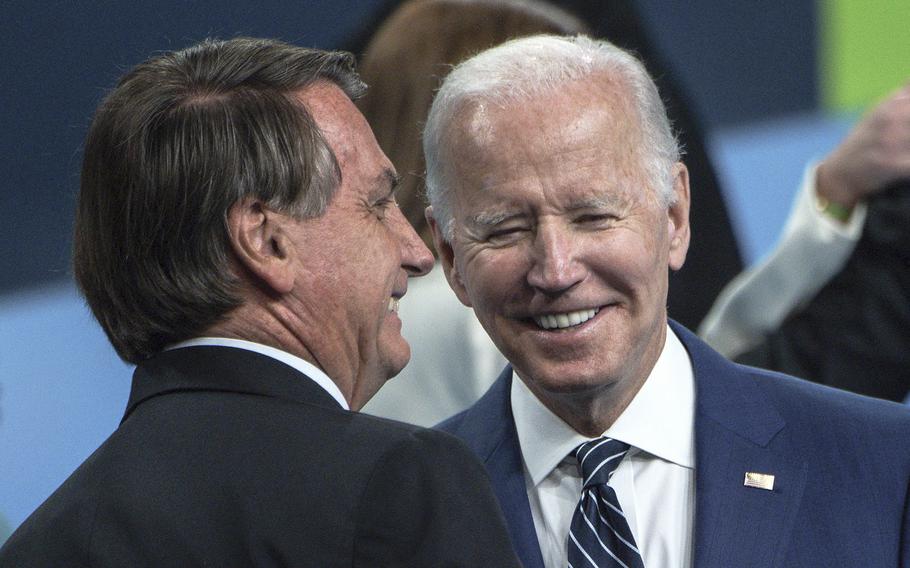 WASHINGTON (Tribune News Service) — Over dinner at the lush Getty Villa in Los Angeles, where curators have recreated a classical Roman home overlooking the Pacific, President Joe Biden had a rare opportunity to speak with leaders from across the Americas all together and in private.

He put his prepared remarks aside. The first thing he wanted to talk about was Russia.

“What Russia does in Ukraine has an impact on the entire world,” Biden told leaders sitting beside their spouses, free of staff or press.

On the surface, the effects of the war in the region have been subtle. But there are signs of rippling impacts underneath.

The fates of Russia’s military contracts with Peru, Bolivia and Brazil have grown precarious, with the United States sanctioning Russia’s defense industry and Moscow shoring up its assets as the war drags on.

Argentina has been forced to find alternative second doses of coronavirus vaccines now that Russia’s Sputnik 2, once widely adopted there, faces supply chain problems. A rush of Russian tourists that boosted Cuba’s tourism industry in recent years has ground to a halt since international flights from Russia were restricted.

Still, while at the Ninth Summit of the Americas, hosted by the United States last week, Biden’s team faced repeated questions from regional presidents and prime ministers over why the U.S. is so focused on Russia’s invasion of Ukraine and how long it thinks the war will last.

“What the president was talking about was how the invasion of Russia in Ukraine really impacts the world, impacts world order, and impacts cooperation between countries,” a senior administration official said.

“It was the first time that the president was able to sit down with his regional counterparts at the summit without the cameras and the large backbench of staff in the room,” the official said. “He went off-script.”

Ahead of the summit, Biden was briefed on an increase in Russian diplomatic engagement across the region since the war began on Feb. 24. Spanish-language channels of Russian state media outlets, RT and Sputnik, exploded with content on Latin American forums in the days after the invasion.

U.S. officials have closely monitored the effects of Russia’s war on its influence across the hemisphere since then, keeping score of Moscow’s ability to maintain its commitments on economic assistance and military aid in Latin America.

The initial invasion sparked a frenzy of diplomatic activity, with senior Russian officials touring the region, heads of state from Latin America visiting Moscow, and U.S. counterparts visiting Caracas for their first talks with Venezuela in years.

But since that time, the administration has come to believe that Russia’s recent diplomatic activity is less about enhancing its presence in the region than about maintaining it, an effort at damage control amid fallout from the war.

“I would expect we’re sharing levels of information, maybe even intel insights as to what Russia is up to globally,” said retired Navy Admiral Craig S. Faller, former head of the U.S. Southern Command. “It’s got to be a global view, because it impacts everybody as we’ve seen time and time again — certainly with the Ukraine crisis.”

Countries that are ideologically aligned to Russia such as Cuba, Venezuela and Nicaragua are unlikely to pull away, said Ryan Berg, senior fellow in the Americas Program and head of the Future of Venezuela Initiative at the Center for Strategic and International Studies.

“If supply chains are so snarled that nitrates for fertilizers from Russia are no longer a possibility, then of course, Brazil and Argentina are going to have to find different solutions,” he added. “Peru and Bolivia that have legacy Russian military equipment, and running contracts for spare parts, will similarly need to find workarounds, or move away from Russian supplies.”

And countries across the region are watching Russia display the limitations of its military power, just like the rest of the world, presenting Biden with an opportunity to push back against Russia’s encroachment in the region over recent years.

“What Russia is trying to do in the hemisphere is provoke a Cold War-like response on the part of the United States,” the senior administration official said. “Our approach has been to support dialogue with countries that we have major disagreements over, or have concerns over the human-rights situation. So we’re supporting negotiations in Venezuela. We’ve engaged with the Cubans. We’ve stretched an open hand to the Nicaraguans to support dialogue.

“Rather than try to divide the region into who is with us and who is against us, we’re trying to respond to some of the core challenges in the Americas,” the official added. “So in some ways, our approach is one that has learned from some of the mistakes of the Cold War.”

Region in the balance

Biden’s private emphasis on Russia was a surprise to many at the summit who for days had tiptoed around the delicate regional politics of the war’s fallout.

At the start of the war, most countries in the Americas voted at the United Nations General Assembly to condemn the invasion or abstained from voting altogether.

But while countries like Mexico, Argentina and Brazil voted with the United States and European nations in condemnation, they have refused to join Western efforts to sanction Russia. And Moscow’s closest regional allies — Cuba, Venezuela and Nicaragua — have since squarely sided with Russian President Vladimir Putin.

“Countries in Latin America and the Caribbean at the U.N. rejected, broadly, Russia’s invasion of Ukraine,” the senior administration official said. “But over time, in this very tough economic environment, they’re going to be very constrained and forced to make decisions that respond to the people that elected them. So that’s really what our focus has been.”

Several countries in the developing world, including in the Americas, have avoided taking a direct stance against Russia, waiting to see how the conflict plays out or even flirting with purchases of cheap Russian oil.

Before meeting Biden on the sidelines of the summit, Brazil’s president, Jair Bolsonaro, who is up for reelection in October, said he was “fully available” to cooperate in finding “a way out” of the war in Ukraine. But he said he had to be “cautious” of the economic consequences of the conflict. Brazil is heavily dependent on Russian fertilizers.

“I have a country to manage,” Bolsonaro said.

In Latin America, many governments fear the combined effects of the war and the pandemic, especially as food and energy prices soar, prompting the U.S. delegation to the summit to focus on food security and public health aid.

While Argentina, Brazil, Canada, Mexico and the United States — the region’s major agricultural producers — issued a joint declaration committing themselves to strengthening food security, the document did not mention Russia or Ukraine explicitly.

The Mexican government did join a statement with the United States and Canada in support of “Ukraine’s independence, sovereignty, and territorial integrity” and condemning “Russia’s unprovoked invasion of its sovereign and democratic neighbor in violation of international law.”

But Mexico has also expressed ambivalence over Russia’s invasion.

Confronting criticism at home over domestic policies, President Andrés Manuel López Obrador has amplified his rhetoric against the United States and NATO in recent days.

“ ‘I’ll supply the weapons, and you supply the dead.’ It is immoral,” López Obrador said during his daily press briefing. “How easy it is to say, ‘Here, I’ll send you this much money for weapons.’ Couldn’t the war in Ukraine have been avoided? Of course, it could.”

Despite the rhetoric, U.S. officials say that governments in the region have been privately alarmed at Russia’s performance on the battlefield and the economic price it has paid in fallout from the war.

“Certainly, Russian diplomatic outreach has increased,” the senior official said, “but much like Russia’s military capability, it’s been shown to be a paper tiger.”

Another official described diplomatic relations between Moscow and many of the region’s capitals as “frozen” as countries wait to see where the conflict goes.

Regional experts say the effects of the war on the region will become clear if the war drags on.

“It’s too soon to make assertions that there will be negative or positive impact for Russia,” said Faller, who during his command focused heavily on Russia and China’s footprint in the region as he met with hemispheric military and government officials. “My own view is that I do think it will impact Russia’s standing, and it will impact their ability to finance things they are doing for their own national image and interest. But I just think it’s too soon to assess any direct correlation.”

Faller’s experience at Southcom taught him not to make assumptions about Russia’s spending priorities. U.S. leadership had assumed before the invasion, for example, that Russia’s struggling economy would inhibit the Kremlin from increasing its financial and military support to Venezuela.

“Both those assumptions proved to be false. Russia stepped up its influence and its support of the security forces in Venezuela,” he said. “The Venezuelan military actually improved their readiness.”

Openings for US and China

While the Biden administration used the L.A. summit to push back against Russian influence, it also pushed stronger ties with the region, sensing that China may become more aggressive as Russia falters.

“China’s approach with their predatory lending practices is something where, with the pandemic and the inflationary impacts of Russia’s invasion of Ukraine, for them certainly provides an opportunity,” the senior official said. “The question then becomes how do you create an alternative.”

Biden officials acknowledged that China loomed large over the summit despite a concerted effort by the U.S. delegation to avoid referencing China, explicitly, in any document.

A new regional economic partnership spearheaded by the United States, called “the Americas Partnership for Economic Prosperity,” aims to mobilize new investments in the region, combat climate change and streamline regional supply chains — a move that regional experts have been recommending for years to push back against China, which has focused on funding new roads, highways and infrastructure throughout the hemisphere.

Biden also said he is committed to reforms of the Inter-American Development Bank Group and to invest in the IDB’s private sector lending arm.

“Frankly, the best antidote to China’s inroads in the region is to ensure that we are forging our own affirmative vision for the region economically,” a U.S. official told reporters at the summit. “We think that that’s why it’s so important that we lay down a really ambitious, regionally comprehensive, updated vision for the kind of economic partnership we want to have.”

“I think in that vacuum is where China has made the recent inroads that it has,” the official added.