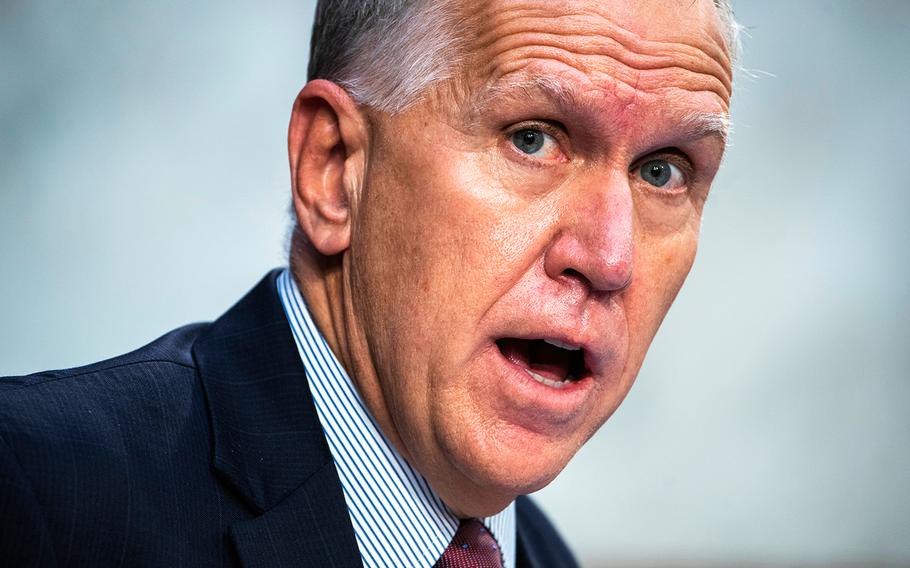 WASHINGTON (Tribune News Service) — Sens. Thom Tillis and Richard Burr voted Thursday against the bill they helped craft that would benefit veterans from Camp Lejeune who were exposed to toxic chemicals in the base’s water for nearly three decades.

Tillis and Burr’s Camp Lejeune Justice Act was combined with the Honoring our PACT Act of 2021, and despite their lack of support for the bill, also known as H.R. 3967, it passed 88-14.

In 1985, Camp Lejeune officials closed two wells on the base after discovering the water contained trichlorethylene, perchloroethylene, benzene, vinyl chloride and other toxins. Veterans who served on Camp Lejeune and Marine Corps Air Station New River between August 1953 and December 1987 may have been exposed to these toxins leading to birth problems, high risks of cancers and health issues.

North Carolina was the only state that had a 10-year deadline from when the exposure happened to when a person could sue, preventing the veterans from filing lawsuits for the toxic exposure. As the state’s House speaker, Tillis worked to remove this law, but it wasn’t retroactive and didn’t help the veterans from Camp Lejeune. Creating this bill, which Reps. David Price, a Democrat, and Greg Murphy, a Republican, mirrored in the House, removed that restriction for those veterans.

Tillis put out a statement following the vote Thursday saying he still advocates for and strongly supports the goal of the PACT Act, adding that he helped draft a large portion of the legislation. However, he said he had concerns that the Department of Veteran Affairs lacked the ability to implement the PACT Act leading to operational and administrative effects that could result in increased wait times, delays in receiving care, and a substantial increase in claim backlogs.

“I fully expect that in the coming years, Congress will be forced to make substantial changes to account for these unintended consequences,” Tillis said in his written statement.

The Honoring our PACT Act of 2021 would provide health care through the Department of Veteran Affairs to veterans exposed to toxic substances, ensures veterans aren’t forced to prove their exposure before receiving care and makes improvements to the department’s process for receiving care for exposure.

Besides the drinking water on Camp Lejeune, the bill targets toxin exposures near open air burn pits in Southwest Asia and radiation exposure in Eniwetok, Palomares, Spain and Uzbekistan; and provides coverage for veterans of Vietnam who served in Guam, American Samoa, Johnston Island, Thailand, Laos and Cambodia.

The Department of Veteran Affairs says that the toxin exposures in North Carolina have led to bladder, kidney and liver cancers and diseases including adult leukemia, aplastic anemia, multiple myeloma, non-Hodgkins lymphoma and Parkinson’s disease.

The Caring for Camp Lejeune Families Act of 2012 ensured that qualifying veterans who served for 30 days between the affected dates could receive nearly all their health care through the VA regardless of whether they had one of the resulting illnesses. Those who had one of 15 illnesses confirmed to be connected to the toxin exposure would have all of their health care paid for, according to the department.

Tillis said in his statement Thursday that he tried to get support for a bipartisan amendment process to strengthen the PACT Act in a way that would ensure the VA could implement it, but he said Majority Leader Chuck Schumer refused.

Despite Tillis’ concerns, others saw the bill’s passage as a step in the right direction.

Military-Veterans Advocacy, a nonprofit organization based in Louisiana, praised senators in a news release.

“MVA has supported the PACT Act concept for years,” said John Wells, the nonprofit’s chairman and a retired Navy commander. “In our visits to the Hill over the last few years, we have championed the need for comprehensive legislation. While this bill does not cover all toxic exposures, it is a huge step in the right direction.”

“North Carolina veterans put themselves in harm’s way to defend our nation, and we have a profound obligation to provide them with the resources they need to live healthy, fulfilling lives,” Ross said in a news release. “Too many service members have been exposed to toxic substances while serving our country, only to return home without access to care and benefits they deserve.”

“Our veterans and their families should not pay the price for congressional inaction,” Ross said. “I’m glad we are setting our partisan differences aside to pass this urgently needed legislation, and I look forward to voting for it when it comes back to the House.”

A version of this bill did pass the House 256-174 in March, with mixed results from North Carolina’s 13 representatives.

Democrats and former Chief Justice Cheri Beasley, who is running for U.S. Senate, took Thursday’s vote as an opportunity to remind people of Budd’s vote in March. Budd is running against Beasley for U.S. Senate to replace Burr, who announced his retirement.

“Passing this commonsense, bipartisan legislation is an important step in honoring our obligation to support our service members and veterans, including many right here in North Carolina,” Beasley said. “It’s outrageous that Congressman Budd voted against supporting veterans, service members, and military families who have been unable to get the care they need or the justice they deserve after exposure to toxic chemicals while serving our nation.”

“With the passage of the Honoring our PACT Act, for the first time in our nation’s history, veterans exposed to toxic burn pits are receiving health care they earned and deserve — no thanks to Congressman Ted Budd.”

Like Tillis, Budd expressed in March the same concerns for backlogs and the VA’s ability to handle an increased patient load without creating long wait times for health care.

“Our veterans deserve timely, high quality health care after they return home,” Budd said in a news release then, adding that he did support the Camp Lejeune Justice Act and the Health Care for Burn Pit Veterans Act.

Neither Beasley nor the Democratic Party mentioned Burr or Tillis nor did they mention the other five North Carolina Republicans who voted with Budd in March.

The PACT Act has to go back to the House because of amendments the Senate made. The House Rules committee is expected to take up the bill at 2 p.m. Tuesday, and pass it through the chamber quickly. President Joe Biden is expected to sign the bill next week.