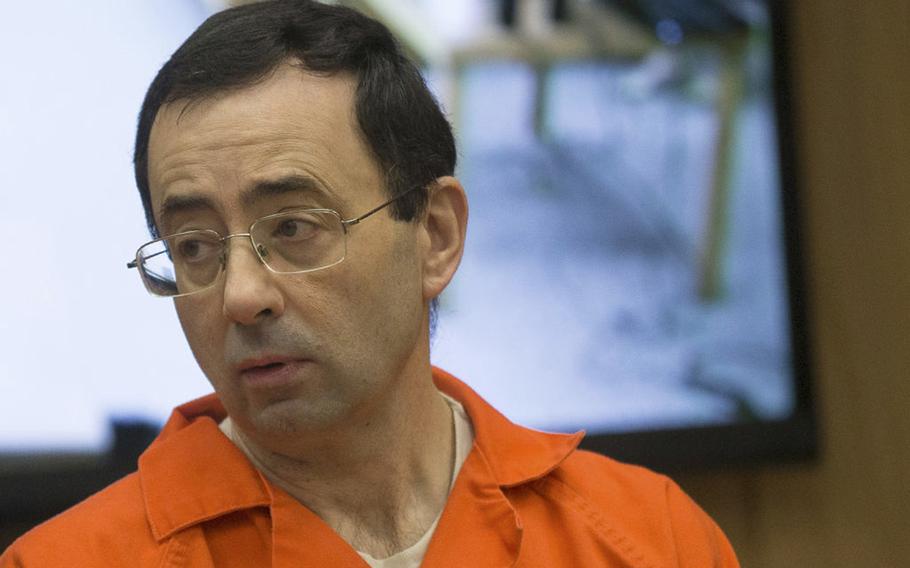 "We are not persuaded that the questions presented should be reviewed by this court," according to the high court's opinion.

The justices added that the "additional trauma where the questions at hand present nothing more than an academic exercise."

Rachael Denhollander, the woman whose first publicly sexual assault accusation of Nassar brought out hundreds of other accusers, tweeted that the ordeal was behind the victims.

"It's over," Denhollander tweeted. "Almost six years after I filed the police report, it's finally over."

Nassar's court-appointed lawyer could not immediately be reached for comment.

Nassar is the former Michigan State University doctor accused of sexually assaulting hundreds of young women, teenage and prepubescent girls under the guise of medical treatment over more than two decades. He pleaded guilty to 10 counts of first-degree criminal sexual conduct involving nine victims and for collecting 37,000 images and videos of child pornography on his computer and is now incarcerated for life.

After Nassar was sentenced in three courts, he launched and lost several appeals aiming to reduce his prison time. He appealed his 2017 sentence of 40-175 years issued by Ingham County Circuit Judge Rosemarie Aquilina. It amounted to an effective life sentence in prison for Nassar, who is now 58 years old.

Though Nassar admitted guilt, he argued his Ingham County sentence was invalid due to Aquilina's bias based on comments she made during his sentencing. He claimed that even before the sentencing hearing began, Aquilina had already decided to impose the maximum allowed by the sentence agreement.

But the Supreme Court noted in its order that the range of concurrent 40 to 175 years "were within the range agreed upon in the parties' plea and sentencing agreement."

In December, the Michigan Court of Appeals in a split 2-1 decision denied an appeal from Nassar. The majority criticized Aquilina but said Nassar admitted guilt, received a fair sentence and Aquilina did not show bias.

The high court said the case presented a "a close question" about Nassar's motion for resentencing.

"We share the concerns of both the Court of Appeals majority and dissent about the conduct of the sentencing judge in this case, and seriously question whether the majority committed error by affirming the trial court's denial of defendant's motion for disqualification and motion for resentencing," according to the court's order.

But the court said Nassar's claims "suffer from preservation problems, and to prove that judicial disqualification is warranted requires defendant to shoulder a heavy burden."

"Second, we conclude that the jurisprudential significance of any holding from this Court would be seriously limited, as the question of this judge's impartiality or bias arises in markedly fact-specific circumstances, involving an unusually high-profile and highly scrutinized case, and a unique sentencing procedure," the opinion said.

The court concluded it wouldn't spend any "additional judicial resources and further subject the victims in this case to additional trauma where the questions at hand present nothing more than an academic exercise."