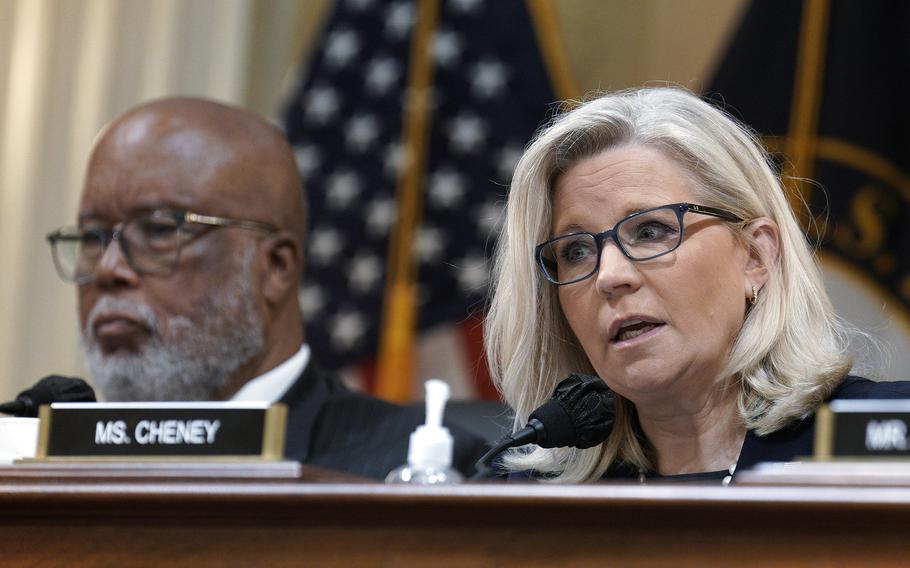 WASHINGTON (Tribune News Service) — Evidence. The word was uttered 41 times Monday during the Jan. 6 select committee's second much-anticipated June hearing and over and over by its members during a weeklong cable TV blitz.

But we have not heard that much direct evidence. Put a different way: The panel of seven Democrats and two politically excommunicated Republicans have yet to turn the hours of video footage from police officers' body cameras, Capitol security cameras and rioters' own self-incriminating social media pots into dots that actually connect.

At least not yet.

It is telling that panel members are not talking much — or at all, really — about drawing those lines. When pressed about proving their allegations, members typically say very little while making no hard promises.

"Well, I think you have seen in the last two hearings that we do have evidence for the assertions that we make during the hearings, and I will let folks tune in to the third hearing to see the evidence," Rep. Stephanie Murphy, D-Fla., told CNN.

Here was California Democratic Rep. Zoe Lofgren, when asked a similar question: "But we're doing the best we can, not only the investigation, but laying out the facts and the evidence that we found in a way that's coherent, we hope, understandable and credible, we hope."

Republican lawmakers see the select committee as anything but. House Minority Leader Kevin McCarthy of California on June 9 called it "the most political and least legitimate committee in American history."

GOP skepticism about the panel is one reason its members should get on with the dot-connecting. It is the only way to break through to some conservatives and moderates who question the committee's structure, conclusions and existence.

"It is important for the American people to have the evidence regarding the efforts of President Trump, and his allies, to overturn the results of a free and fair election and to prevent the peaceful transition of power on the basis of that election," said Mark Rom, a public policy and government professor at Georgetown University.

But that does not mean the select committee has to get into the tricky business of sending criminal referrals based on any of its findings to federal prosecutors. After all, the panel on Wednesday released video of a man it contends was part of a suspicious tour group led by Rep. Barry Loudermilk, R-Ga., on Jan. 5 who threatened to use a flagpole with a sharpened end — with Old Glory a would-be accessory to assault, or worse — to harm Democratic lawmakers. Justice Department officials likely do not need a congressional permission slip or recommendation to look into this self-described "American patriot."

But the matter exposed a major point of contention among panel members this week.

"No, you know, we're going to tell the facts. If the Department of Justice looks at it, and assume that there's something that needs further review, I'm sure they'll do it," committee Chair Bennie Thompson told reporters Monday evening.

The Mississippi Democrat with the unmistakable drawl of his native region simply does not see that as part of the special panel's charge.

In a twist, committee members who weighed in, including Democrats, sided with Wyoming Republican Vice Chair Liz Cheney 's stance that the panel has not yet decided about referrals.

Members denied that Wednesday's planned hearing being postponed was related to the referral row. "You know, it was a combination of scheduling issues," Murphy said. It is fair to wonder whether the very public disagreement played a role, however.

It is doubtful any congressional or legislative committee has avoided public spats, but this one is dealing with a matter so important in such a politically toxic and divided time that it cannot afford another if it wants to avoid distractions from its message.

Though the committee has unveiled only six hours of its findings, "the evidence of possible criminal conduct is steadily mounting," a group of experts tracking and analyzing every second of footage and testimony wrote for national security site Just Security.

The experts called the criminal referrals row " a bit overblown."

"We favor referrals, but simply providing a roadmap of all the evidence would also be acceptable," the Just Security experts wrote. "And Chairman Thompson also said yesterday that the committee intended to provide all of its evidence to prosecutors after the hearings. No one disagreed with him on that point."

Thompson appears to have the stronger legal argument. But if the panel does start connecting dots and makes the case that, as the chairman himself alleged on June 9, Donald Trump oversaw an "attempted coup," political pressure will mount for such formal recommendations to the Justice Department to prosecute the 45th president and others in his inner circle.

But doing so would set a new precedent, and perhaps not one Democratic leadership is prepared to take with Republicans in the driver's seat to capture congressional majorities in November's midterm elections.

"The Jan. 6 Committee need not, and should not, make criminal referrals," Rom said. "It should present the evidence regarding the causes of the Jan. 6 insurrection and the events leading up to it."

"It is unwise for one political body (the Congress) to criminalize the activities of another (the Executive)," he wrote in an email to CQ Roll Call. "Criminal referrals would be (understandably) seen as politically motivated. As the DOJ is watching the hearings closely, it can (and should) make its own judgments as to whether crimes have been committed."

The select committee's presentations thus are always focused on or brought back to one man: Trump. It is difficult to imagine Garland's words were not, in large part, meant for the same audience of one.

Trump's presidency and post-presidency have been compared to what federal agents call a " RICO case," meaning ones brought against organized crime figures under the Racketeer Influenced and Corrupt Organizations Act of 1970.

"I thought, at the end of our [Monday] hearing, when we had video of rioters on Jan. 6 essentially repeating the president's 'big lie' was very compelling," Lofgren said this week. "Those individuals bought the lie that the president gave to them and responded. And many of them are now in prison or in jail. They paid a big price for the president's misconduct here."

She was referring to rioters who have been prosecuted already. If the Jan. 6 committee begins connecting the dots it has ably put on the board, those around the former president, as in a RICO case, may soon have to decide between federal charges and giving up their former boss.

After all, Garland is watching. He doesn't need Congress' permission, just its evidence.