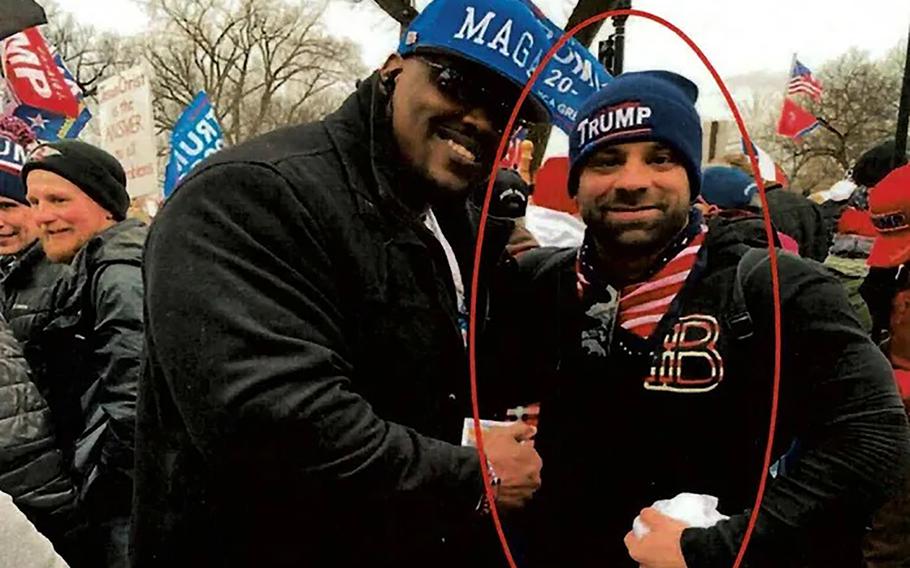 Lawrence Stackhouse, right, posted this photograph to Telegram showing himself at the Jan. 6 rally in Washington, D.C., before the storming of the U.S. Capitol building. (U.S. Justice Department)

(Tribune News Service) — A once-aspiring Proud Boy from Camden County was sentenced Friday to two weeks' incarceration for his role in the Jan. 6, 2021, Capitol riot.

Lawrence Earl Stackhouse III, 33, of Blackwood, had texted a friend the week before the riot asking for an application to join the group. He was wearing a Proud Boys hoodie as he followed the mob past the smashed windows of the Capitol building and through the kicked-in door of House Speaker Nancy Pelosi's office.

"I ruined my life with my dumb decisions," he told U.S. District Judge Beryl A. Howell during a court hearing in Washington. "I regret getting involved in politics at all. I regret allowing it to fry my brain."

But Howell showed little sympathy. She balked at Stackhouse's explanation that he had no real interest in the Proud Boys and had only been wearing the organization's regalia because the colors matched the beanie he was wearing that day.

That "sounds like a bit of a made-up, after-the-fact explanation," she said. "Wearing a Proud Boys logo was a choice."

The sentence she imposed — which also included a three-year term of probation, three months' house arrest and $500 in restitution — was less than half the 45-day jail term that prosecutors had originally sought.

Stackhouse, a former sheet metal worker who lost jobs with government contractors like Boeing and Lockheed Martin after his arrest last year, pleaded guilty to one misdemeanor count of illegally parading or demonstrating on Capitol grounds.

He is the second of 26 New Jersey defendants to face sentencing for participating in the attack, which threatened the peaceful transition of power, injured scores of officers, caused millions in damage and has led to more than 820 arrests.

And the Proud Boys, a militant, far-right organization, whose top leaders — including the former president of its Philadelphia chapter, Zachary Rehl — have been charged with sedition for what prosecutors have described as the pivotal role they played that day in riling up the crowd of Trump supporters.

Despite the interest he'd expressed in joining the group, Stackhouse maintains he never followed through on becoming a member and has no interest in joining now.

Still, prosecutors pointed to a chain of text messages eight days before the riot between a man they've described as a Proud Boys prospect — Michael Gianos, 33, of Marlton — as they made plans to travel to Washington on Jan. 6.

Stackhouse and Gianos had previously participated in protests together over New Jersey Gov. Phil Murphy's pandemic shutdown orders at the Atilis Gym in Bellmawr.

"We're going to be going after Antifa," Gianos wrote in anticipation of Jan. 6, according to text exchanges quoted in court filings.

Stackhouse replied: "Full force … Jan. 6 is going to be awesome."

In texts with another charged rioter — Rachel Myers, 33, of Port Richmond and an employee of Delilah's Gentlemen's Club & Steakhouse in South Philadelphia — he offered to bring a knife when she said she looked forward to fighting with counterprotesters.

And as the mob breached police barriers and fought their way into the Capitol building, Stackhouse passed rioters brawling with officers, people smashing windows and doors on his way inside.

Surveillance footage from the Capitol shows Stackhouse, Gianos, and Myers among the throngs of people pushing their way through the Senate wing doors. With Stackhouse in his Proud Boys hoodie and Myers carrying a Delilah's backpack, they milled about the Rotunda briefly. They followed a man who kicked in the door to the offices of House Speaker Nancy Pelosi, while her terrified staff cowered under desks inside.

Afterward, text messages show the trio veering between reveling in their participation in the attack and fretting over whether the FBI would soon show up at their doors. At points, they suggested among each other that the riot they'd just participated in had been started by antifa.

"Don't regret one thing," Stackhouse texted a friend the day after the attack. "F — the government."

When photos later surfaced online of Myers on Capitol grounds with her Delilah's backpack, he reached out to allay her concerns.

"We are legit PIC (partners in crime,)" he wrote. "There's a Delilah's in AC (Atlantic City) too soooo that helps."

But it was Stackhouse's coworkers who first brought him to the attention of authorities. He'd previously been reprimanded at work for expressing support for an unspecified "hate group," according to an FBI affidavit filed in his case. Agents said Stackhouse had boasted to coworkers about his participation in the riot.

But as investigators interviewed him upon his arrest last year, Stackhouse maintained that he and the other rioters had been let into the building by police waving them past barricades and that he had no idea that the mob had forcefully smashed their way inside minutes before he arrived — a claim later disproved by video from the scene.

"He created this picture of a rosy, peaceful protest and overzealous police officers, and that couldn't be further from the truth," Ayers-Perez said in court Friday. "I don't believe (he has) remorse. I don't believe (he's) accepting responsibility."

Stackhouse's attorney, Ubong E. Akpan, maintained that her client had been misled, that he traveled to Washington genuinely believing that Vice President Mike Pence could overturn the results of the 2020 election, and that public pressure in the form of the crowds streaming into the Capitol building was part of that process.

She noted that since his arrest, he's voluntarily sat for interviews with the FBI and the congressional committee investigating the Jan. 6 attack and added that he's been unable to find steady work since his role in the riot became known and now supports himself driving for Uber.

"Mr. Stackhouse is not a villain," she said. "He's a young man who has a family who loves him, who cares deeply for him. It's important to know he's not a lone wolf waiting in the wings in the bushes to attack any members of Congress."

Investigators charged Gianos and Myers separately in November after learning of their presence at the Capitol through a search of Stackhouse's phone. Both have entered not guilty pleas and are awaiting trial.

As the judge announced his sentence Friday, Stackhouse said he's ready to put the experience behind him.

"I never fully understood what I was getting myself into," he told Howell. "I didn't know the vice president couldn't overturn an election. … I went along with the flow, and it screwed me."