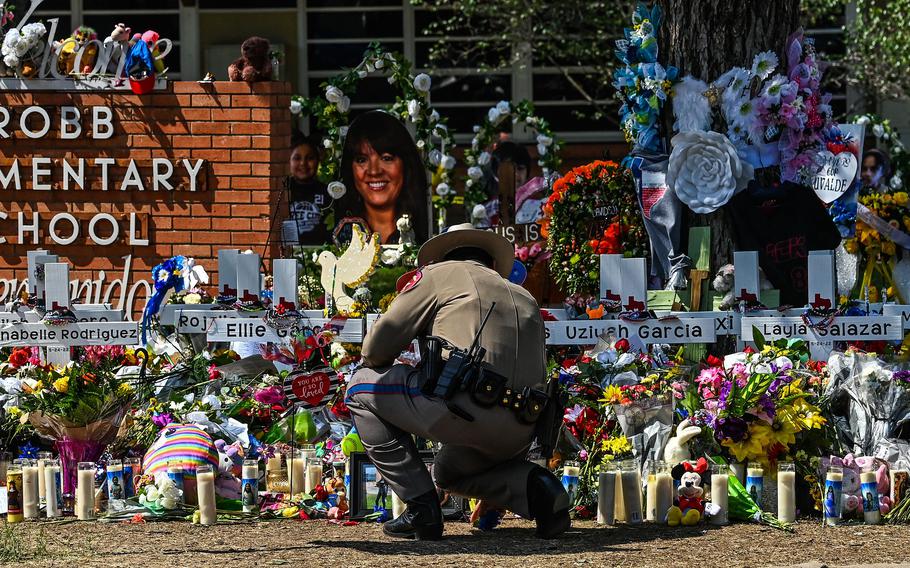 A police officer clears the makeshift memorial at Robb Elementary School in Uvalde, Texas, on May 29, 2022. (Chandan Khanna/AFP/Getty Images/TNS)

(Tribune News Service) — When Dr. Roy Guerrero, a pediatrician in Uvalde, Texas, testified before a U.S. House committee June 8 about gun violence, he told lawmakers about the horror of seeing the bodies of two of the 19 children killed in the Robb Elementary massacre. They were so pulverized, he said, that they could be identified only by their clothing.

In recent years, the medical profession has developed techniques to help save more gunshot victims, such as evacuating patients rapidly. But trauma surgeons interviewed by KHN say that even those improvements can save only a fraction of patients when military-style rifles inflict the injury. Suffering gaping wounds, many victims die at the shooting scene and never make it to a hospital, they said. Those victims who do arrive at trauma centers appear to have more wounds than in years past, according to the surgeons.

But, the doctors added, the weapons used aren’t new. Instead, they said, the issue is that more of these especially deadly guns exist, and these weapons are being used more frequently in mass shootings and the day-to-day violence that plagues communities across the nation.

The doctors, frustrated by the carnage, are clamoring for broad measures to curb the rise in gun violence.

Weeks after the Uvalde school shooting, what steps the country will take to prevent another attack of this magnitude remain unclear. The House passed measures earlier this month aimed at reducing gun violence, and the Senate announced a limited gun safety agreement that also focuses on mental health and school safety.

Many physicians agree something substantial must be done. “One solution won’t solve this crisis,” said Dr. Ashley Hink of Charleston, South Carolina, who was working as a trauma surgery resident at the Medical University of South Carolina in 2015 when a white supremacist killed nine Black members of the Mother Emanuel African Methodist Episcopal Church. “If anyone wants to hang their hat on one solution, they’re clearly not informed enough about this problem.”

The weapons being fired in mass shootings — often defined as incidents in which at least four people are shot — aren’t just military-style rifles, such as the AR-15-style weapon used in Uvalde. Trauma surgeons said they are seeing a rise in the use of semiautomatic handguns, such as the one used during the Charleston church shooting. They can contain more ammunition than revolvers and fire more rapidly.

Overall gun violence has increased in recent years. In 2020, firearm injuries became the leading cause of death among children and adolescents. Gun-related homicides rose almost 35% in 2020, the Centers for Disease Control and Prevention reported in May. Most of those deaths are attributed to handguns.

Still, trauma surgeons such as Dr. Rob Todd at Atlanta’s Grady Memorial Hospital blamed military-style rifles and the end of the national assault weapons ban in 2004 for higher levels of deadly gun violence.

A study recently published by JAMA Network Open found that for every mass shooting death, about six other people were injured. Trauma surgeons interviewed by KHN said the number of wounds per patient appears to have increased.

“I feel we are seeing an increase in the intensity of violence over the past decade,” said Dr. Joseph Sakran, a trauma surgeon at Johns Hopkins Hospital in Baltimore. He cited the number of times a person is shot and said more gun victims are being shot at close range.

Survival rates in mass shootings depend on multiple factors, including the type of firearm used, the proximity of the shooter, and the number and location of the wounds, said Dr. Christopher Kang of Tacoma, Washington, who is president-elect of the American College of Emergency Physicians.

The perpetrator of the Charleston massacre shot each of the nine people who were killed multiple times. Only one of those people was transported to the hospital, and, upon arrival, he had no pulse.

The chaos at a mass shooting scene — and the presence of an “active” shooter — can add crucial delays to getting victims to a hospital, said Dr. John Armstrong, a professor of surgery at the University of South Florida. “With higher-energy weapons, one sees greater injury, greater tissue destruction, greater bleeding,” he added.

Dr. Sanjay Gupta, a neurosurgeon who is chief medical correspondent for CNN, wrote about the energy and force of gunshots from an AR-15-style rifle, the type also used in the recent mass shooting in Buffalo, New York. That energy is equal to dropping a watermelon onto cement, Gupta said, quoting Dr. Ernest Moore, director of surgical research at the Denver Health Medical Center.

Medical advances over the years, including lessons learned from the battlefields of Iraq and Afghanistan, have helped save the lives of shooting victims, said Armstrong, who trained U.S. Army surgical teams.

Those techniques, he said, include appropriate use of tourniquets, rapid evacuations of the wounded, and the use of “whole blood” to treat patients who need large amounts of all the components of blood, such as those who have lost a significant amount of blood. It’s used instead of blood that has been separated into plasma, platelets and red blood cells.

Another effective strategy is to train bystanders to help shooting victims. A protocol called “Stop the Bleed” teaches people how to apply pressure to a wound, pack a wound to control bleeding and apply a tourniquet. Stop the Bleed arose after the 2012 shooting at Sandy Hook Elementary School in Newtown, Connecticut, where 20 children and six adults were killed.

The CDC, which in the past two years has been able to conduct gun research after years of congressional prohibitions, has funded more than a dozen projects to address the problem of gun violence from a public health perspective. Those projects include studies on firearm injuries and the collection of data on those wounds from emergency rooms across the country.

For some doctors, gun violence has fueled political action. Dr. Annie Andrews, a pediatrician at the Medical University of South Carolina, is running as a Democrat for a seat in the U.S. House on a platform to prevent gun violence. After the school shooting in Uvalde, Andrews said, many women in her neighborhood reached out to ask, “What can be done about this? I’m worried about my kids.”

Dr. Ronald Stewart, chair of surgery at San Antonio-based University Health, told KHN that the people shot in Uvalde had wounds from “high energy, high velocity” rounds. Four of them — including three children — were taken to University Hospital, which offers high-level trauma care.

The hospital and Stewart had seen such carnage before. In 2017, the San Antonio hospital treated victims from the Sutherland Springs church shooting that left more than two dozen dead.

It will take a bipartisan effort that doesn’t threaten Second Amendment rights to make meaningful change on what Stewart, a gun owner, called a “significant epidemic.” Stewart noted that public safety measures have curbed unintentional injuries in car crashes. For intentional violence, he said, progress hasn’t been made.