NASA set to finally complete crucial test for Artemis I 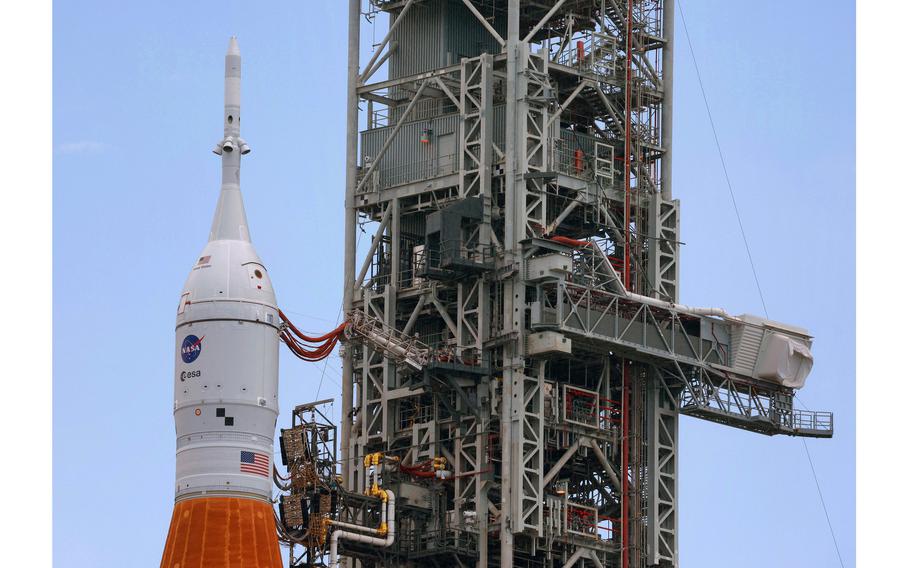 Artemis I — the NASA moonshot rocket — stands at launch pad 39-B at Kennedy Space Center, Fla., Monday, June 6, 2022. The 322-foot-tall rocket stack includes the Orion spacecraft and made the 4.4-mile journey from the Vehicle Assembly Building to the pad in 11 hours. (Joe Burbank, Orlando Sentinel/TNS)

ORLANDO, Fla. (Tribune News Service) — NASA is hoping the fourth time’s the charm for the final big test before it can finally launch its massive new rocket to the moon.

The redo of the Artemis I wet dress rehearsal at Kennedy Space Center is slated to begin on Saturday evening with staff call to stations about 48 hours before the culmination of the test expected to be completed Monday afternoon. A “wet dress rehearsal” is the last major test before launch.

The test looks to run a simulated countdown including the filling and draining of fuel to the 5.75 million-pound, 322-foot-tall combination of the Space Launch System, Orion capsule and mobile launcher sitting at Launch Pad 39-B.

The hardware first made the trip to the launch pad last March, but a series of pressure and valve issues scrubbed three previous runs at the wet dress rehearsal, forcing NASA to roll it back to the Vehicle Assembly Building to address the problems.

With issues resolved, NASA looks to complete the test and potentially set up a launch date in August, with the first opportunity during a window that runs July 26-Aug. 10 followed by potential windows that run from Aug. 23-Sept. 6, Sept. 20-Oct. 4, Oct. 17-31, Nov. 12-27 and Dec. 9-23. Each window has only certain days during which the Earth and moon are in the right position for the planned mission.

“That late July, early August launch period is very difficult for us to hit,” said Jim Free, NASA’s associate administrator for the Exploration Systems Development Mission Directorate. “When you look at the past flow, and if everything goes well on Monday, by the time we would get back to the VAB, do the work that we need to do, turn around and come back and be at the pad, that’d be pretty tough. So I think we’re probably looking at the latter part of August. But, again, our focus is get the team through this.”

The big part of the test begins Monday morning as NASA goes about the filling and draining of the core and upper stage with 730,000 gallons of super-cooled liquid hydrogen and liquid oxygen while also simulating a countdown but without lighting the engines. The timeline calls for a T-0 at 2:40 p.m.

Once compete, the rocket will head back to the VAB one more time before finally making what would be its final rollout to the launch pad for a liftoff.

When it launches, the rocket will become the most powerful to lift off from Earth, producing 8.8 million pounds of thrust. Artemis I is an uncrewed flight that will send Orion farther into space than any other human-rated spacecraft has ever traveled — 280,000 miles away, which is 40,000 miles beyond the moon.

The mission could last either four or six weeks when Orion returns to Earth for a splashdown in the Pacific Ocean near the coast of California.

“This is the first step on getting us back to the moon,” Free said. “This launch has very specific objectives. It is a flight test. We want to test the heat shield and lunar re-entry velocities. We want to make sure we recover the vehicle. We want to make sure that the systems work in orbit. That’s really what we’re trying to get out of this so that when we get to (Artemis) II, we feel confident of putting crew on it.”

Originally to have launched in 2016, the SLS and Orion hardware have seen numerous cost and production delays, which have had a domino effect on future Artemis missions.

NASA now plans the crewed Artemis II flight, which will take humans in an orbit around the moon without landing, no earlier than May 2024. The Artemis III mission, which would use a Human Landing System, contracted to SpaceX using a version of its Starship spacecraft, will bring two astronauts, including the first woman, to the lunar surface. That mission is now planned for no earlier than 2025.

“We still are pushing as hard as we can to get to the Artemis II and III dates,” Free said. “Obviously as Artemis I has moved, those are affected. But this is not easy, right? Otherwise everybody would be going back to the moon. That’s not an excuse. That’s just a fact. This is really hard work. And this is a big vehicle, and the first time we’re flying it. It’s in family to where folks have had challenges before. Again, not an excuse. There’s not a single person on this team that shies away from the responsibility that we have to manage ourselves and our contractors and to deliver, and deliver means meeting those flight test objectives for (Artemis) I and meeting the objectives of Artemis program.”