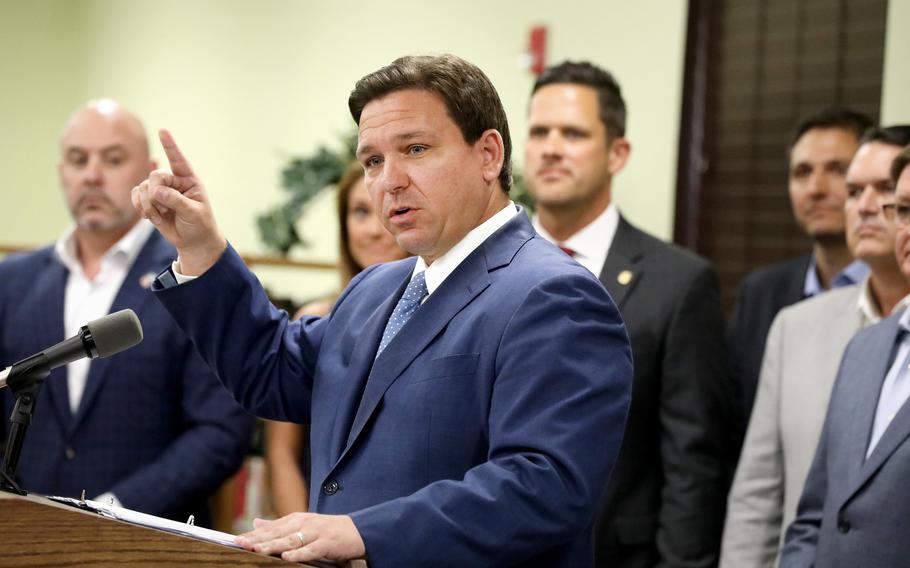 (Tribune News Service) — Florida Gov. Ron DeSantis announced the appointment of a retired Marine as director of the Florida State Guard as the governor works to revive the World War II-era civilian force.

DeSantis has pitched the State Guard as a way to provide additional support beyond the Florida National Guard during state emergencies. But he also said federal vaccine requirements for military servicemembers inspired his decision to reestablish the State Guard.

The state force differs from the much larger Florida National Guard because the State Guard would be in use only within Florida, while the National Guard can be sent out to missions across the country. State Guard members cannot be drafted into the armed forces.

Graham grew up in Miami and graduated from Auburn University before being commissioned into the Marines, a spokesperson for the governor’s office told the Tampa Bay Times. He served two years as a helicopter pilot flying evacuation missions during the Iraq War and later became a member of the Marine Corps’ Antiterrorism Battalion.

He said he was looking forward to leading the Guard and said it had a particularly important mission because in Florida, “the last hurricane is behind us and the next hurricane is on the horizon.”

The governor’s news conference featured images of the State Guard’s logo of an alligator on a blue backdrop over a banner that says, “Let us alone” in all capital letters.

Florida would not be the only state with a state guard; 22 other states have existing forces, according to the Brennan Center. State guards tend to be smaller groups focused on emergency operations, like hurricanes and natural disasters, according to the center.

DeSantis on Wednesday praised the state’s National Guard but said they were stretched thin with one of the lowest guardsmen to civilian ratios of any state. He also reiterated criticism of President Joe Biden’s administration for putting a vaccine requirement for military service.

Florida lawmakers passed a budget that includes $10 million for a state guard with a force of up to 400 volunteers. DeSantis initially asked for $3.5 million for a 200-guard force.

DeSantis said the increase in funding and forces came because of high interest, joking in a lilted voice that it was because of media outlets making it seem like he was “raising an army.”

“The thing is, all they did was give free advertising for it,” DeSantis said. “So people are like, ‘Oh man, I want to join the Florida State Guard.”

The idea of the State Guard has been a point of criticism for Democrats. U.S. Rep. Charlie Crist, who is running for governor, called the Guard DeSantis’ “handpicked secret police,” and Agriculture Commissioner Nikki Fried, another candidate for governor, called DeSantis an “authoritarian dictator.”