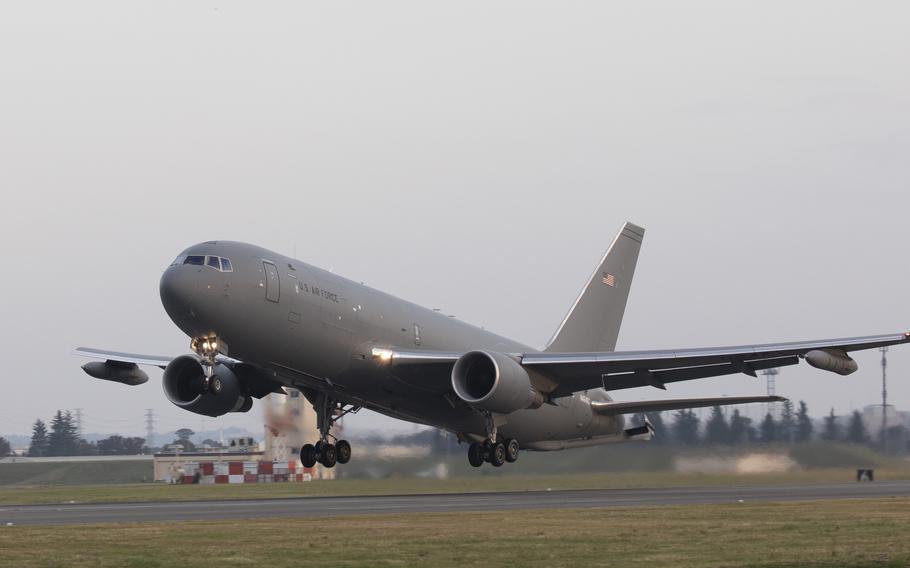 A Boeing KC-46A Pegasus takes off at Yokota Air Base, Japan, Oct. 25, 2018, during a system evaluation. Boeing and Virginia Tech will establish a workforce development center in Alexandria, Va., to help military veterans transition to civilian life and build careers in the technology and defense industries. (Yasuo Osakabe/U.S. Air Force)

Boeing and Virginia Tech will establish a workforce development center in Alexandria, Va., to help military veterans transition to civilian life and build careers in the technology and defense industries, the two entities announced Monday.

The center, which will be housed at Virginia Tech’s new graduate engineering campus in the Potomac Yard neighborhood, marks yet another example of how local officials are hoping to expand and diversify Northern Virginia’s pipeline of engineering talent as the region shapes up into a major tech hub.

And it also underscores how Boeing is growing its regional footprint outside its Arlington, Va., offices, just weeks ago confirming that it would be relocating its headquarters there.

“Our military veterans need a big assist to get into civilian life, to pursue civilian livelihoods and to pursue tech degrees,” Boeing CEO Dave Calhoun said at a news conference that included Virginia Gov. Glenn Youngkin, R, and both of Virginia’s U.S. senators, both Democrats, Mark Warner and Tim Kaine. “It is front and center for every one of us to be thinking about this every day, all day.”

Part of that donation will be used to fund the hub — officially known as the Boeing Center for Veteran Transition and Military Families — although officials did not say exactly how much will go toward the initiative.

Tim Sands, president of Virginia Tech, said the hub is a continuation of his institution’s long history with the military. The university is one of six in the United States that is designated as a “senior military college,” with a 1,200-person cadet program at its Blacksburg campus that has existed since the school’s founding more than a century ago.

“We’re producing military leaders, but we have to think about the course of their careers and what happens after they have served and have completed their service,” he said. “We recognized that challenge for many years, but we finally have a chance to do something about it in a big way.”

Lance Collins, vice president and executive director of the Alexandria innovation campus, said in an interview that the veterans center will intentionally be located next to student services offices in the building.

The hub, which will open in 2024, will offer outreach, workforce development and educational resources, with the ultimate goal of helping military veterans contribute to the area’s flourishing technology sector.

“They have phenomenal leadership skills. A lot of the groundwork in some way or shape is laid,” he said. “Our goal is just to bring them to a level where they can really enter into the technical system at a higher level.”

While military veterans make up more than 15% of Boeing’s workforce, Collins said that — particularly given their heavy concentration in Northern Virginia — they are an “underserved” group that can help fill the gap between the area’s growing number of tech jobs and qualified graduates to fill those positions.

Northern Virginia has long served as a major site for military business, but the region in recent years has branched out to attract a more diverse corporate clientele, including Amazon’s second headquarters, which is set to hire 25,000 employees in total. (Amazon founder Jeff Bezos owns The Washington Post.)

Raytheon announced last week that it would also be relocating to Arlington, a move that means that it and the rest of the “Big Five” defense contractors — Lockheed Martin, Northrop Grumman, General Dynamics and Boeing — all will be located in the Washington, D.C., suburbs.

Boeing has said it is also planning to establish a research and technology hub in Arlington “to harness and attract engineering and technical capabilities.” Connor Greenwood, a Boeing spokesman, said the company did not have an estimate of how many jobs that initiative could bring to the region.