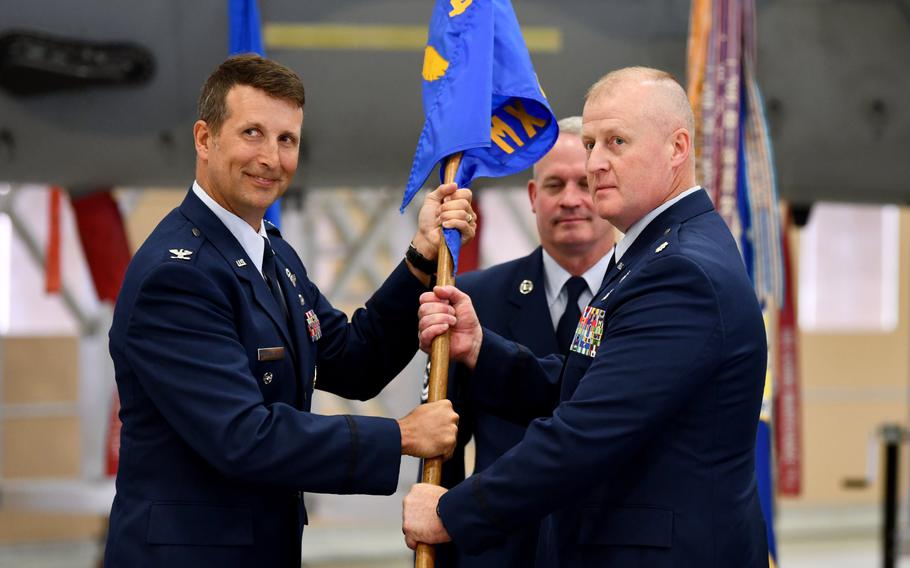 WESTFIELD, Massachusetts (Tribune News Service) — While saying goodbye to the many members of the 104th Fighter Wing, Commander Col. Tom Bladen said his perfect successor has been in their midst all along.

At a change of command ceremony Sunday afternoon at Barnes National Air Guard Base, Bladen officially turned the wing over to his vice commander Col. David Halasi-Kun, a pilot who has served as the vice commander for the past two years. The event also ushered in three other leaders for the Air National Guard wing.

The leadership changes come as the Pentagon is deciding which of two new fighter jets will be assigned to the 104th to replace its aging fleet of 21 F-15C Eagles. For two years, the unit has been undergoing evaluation on whether it will receive F-35 or F-15EX jets.

Halasi-Kun, of Suffield, has been in the military since graduating from the Air Force Academy in 1998 and has served at Barnes Air National Guard Base for a dozen years in a variety of positions including operations group commander and mission support commander.

Bladen, who is retiring after taking over as wing commander in June, 2020, said he and Halasi-Kun have known each other for years and he shared a story about the two of them talking about how to make the Air Force a better place while hanging out in a smoke-filled bar in Bulgaria in 2016.

“We had a strong feeling there was a better way to do business,” he said. “We needed to find a way where we could trade blind compliance … We needed to create an atmosphere where NCOs and airmen were vested stakeholders in the decisions that were being made.”

Over the past two years they worked toward that goal despite the many challenges the wing faced during the COVID-19 pandemic.

Halasi-Kun pledged to continue to foster that work by creating time-saving practices, building trust, promoting teamwork, fighting bureaucracy for the sake of bureaucracy and empowering airmen to “take bold action.”

He promised to continue focusing on doing what is right for the mission instead of just following the regulations.

During the event, Lt. Col. Peter Carr was promoted to vice commander and Lt. Col. Steve Reynolds was transferred to his previous job as the wing’s maintenance group commander.

During the event the new commanders thanked family members for support and recognized the members of the wing, most of whom are part-time military, for going above and beyond especially while handling the unprecedented issues the COVID-19 pandemic brought.