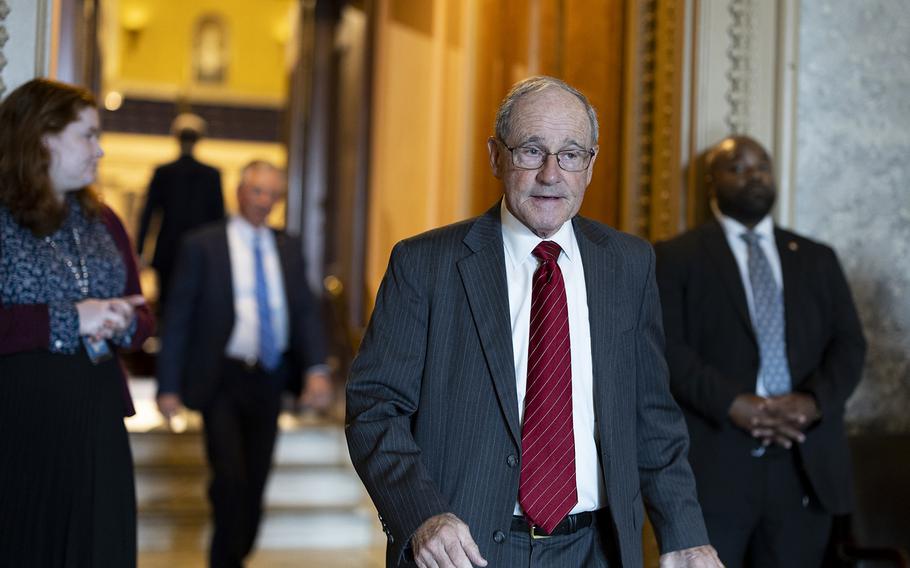 Sen. Jim Risch, R-Idaho, leaves the Senate Chambers during a series of votes in the U.S. Capitol Building on May 11, 2022, in Washington, DC. (Anna Moneymaker/Getty Images/TNS))

WASHINGTON Tribune News Service) — There does not appear to be ample Republican support to amend laws that tightly prohibit U.S. support to the International Criminal Court as lawmakers search for ways Washington can assist Ukrainian officials with war crimes investigations of Russians.

Evidence of atrocities committed by Russian forces against Ukrainians, which grows by the day, has outraged lawmakers on Capitol Hill and spurred legislative proposals for providing U.S. assistance for war crimes investigations and prosecuting the perpetrators.

The overall Republican antipathy toward U.S. involvement with the Hague-based U.N. court for prosecuting the world’s most serious crimes, such as genocide and crimes against humanity, comes as a handful of GOP lawmakers have more recently made the case that it is in U.S. national security interests to use war crimes charges and other accountability measures like individual sanctions and travel bans to ensure accused perpetrators remain international pariahs.

Republicans and Democrats alike want to send a deterrent signal to current and future authoritarian rulers. The worry is some would-be military aggressors may conclude that, based on the recent experiences of Syria’s Bashar Assad and Russia’s Vladimir Putin, brutality against civilians will be grudgingly tolerated by the international community if the costs of removing them from power are deemed too steep.

“It is vitally important that the United States hold the line against rehabilitating the [Assad] regime,” said Senate Foreign Relations ranking member Jim Risch, R-Idaho., at a Wednesday committee hearing that examined recent moves by some Arab governments to increase their engagement with Assad after more than a decade of civil war and international ostracization failed to oust him.

“Current and future autocrats are watching our actions. We cannot send the message that we will forget these atrocities over time and welcome Assad back to the international community.”

To that end, the Foreign Relations Committee advanced to the floor on Thursday a House-passed bill that would direct the Biden administration to report on efforts to collect, analyze and preserve evidence of war crimes and other atrocities that occurred as a result of Russia’s invasion of Ukraine.

The bill, from House Foreign Affairs ranking member Michael McCaul, R-Texas, also would require reporting on what processes the administration has established to share evidence of Ukraine war crimes with domestic, foreign or international courts and tribunals.

Though the McCaul bill mentions domestic courts as a possible setting for trials of Russian individuals, no U.S. law authorizes the domestic prosecution of foreigners accused of committing war crimes abroad against non-U.S. citizens. Recently introduced legislation from the Republican and Democratic leaders of the Senate Judiciary Committee seeks to close that loophole — if such a suspected war criminal is found in the United States.

“The gap in U.S. war crimes law has long been a glaring one,” said Laura Dickinson, a George Washington University Law School professor who specializes in human rights and the law of armed conflict.

“Think about it, we can prosecute our own troops for war crimes but not other perpetrators if the victims are not American,” Dickinson said. “Other countries, such as Germany, have expansive jurisdiction for war crimes prosecutions, often referred to as universal jurisdiction, but the U.S. doesn’t. Closing this loophole is very important and has little downside.”

Sens. Charles E Grassley, R-Iowa, and Richard J. Durbin, D-Ill., feel so strongly about what they believe is their common-sense legislation that they are trying to get it passed by unanimous consent in the Senate without having a committee markup.

“It ought to be one of these things that are kind of non-controversial,” Grassley said this week. “I know that it’s something that’s a big hole in our existing criminal law and we ought to be getting it passed really easily but I don’t have any calendar for when that could happen.”

Added Durbin: “We’re working on that. I don’t know if it’ll be a markup. I hope we can do it without one.”

But the No. 2 Senate Democrat said he sees little Republican appetite to revisit the 1999 and 2002 laws that respectively prohibit American taxpayer financial support and general technical assistance to the ICC in order to create an explicit carve out that would permit U.S. assistance for Ukraine war crimes-related cases.

Rep. Sara Jacobs, D-Calif., has introduced a bill that would repeal the 1999 prohibition against U.S. funding of the ICC, but it has not attracted any Republican co-sponsors.

Jacobs, a former State Department and United Nations staffer, also has a second bill with one Republican co-sponsor, Rep. Victoria Spartz, R-Ind., who immigrated from Ukraine, that would create an exception to the funding ban to allow for U.S. financial support of ICC investigations into Ukraine war crimes.

And Rep. Jason Crow, D-Colo., is also working on a Ukraine war crimes prosecution bill. His office said that when it is introduced, there is a strong likelihood of GOP co-sponsorship.

One reason there has not been greater bipartisan clamor for amending the legal prohibitions on U.S. support of the ICC is reporting from The New York Times that the Justice Department’s Office of Legal Counsel has determined the 2002 statute against providing non-financial assistance to the ICC does allow other forms of support for the court such as intelligence sharing in specific cases.

Established in 2002, the ICC has not achieved the universal support and legitimacy its backers initially envisioned after major powers like the United States, China, Russia, and India refused to join the tribunal.

“I think it is high time for Congress to loosen the straight jacket that it has placed on the U.S. in cooperating with the ICC,” Dickinson said. “Accountability for war crimes is in U.S. interests.”

Recently, U.S. Ambassador for Global Justice Beth Van Schaack traveled to The Hague for meetings with ICC Prosecutor Karim Kahn. A State Department statement said the late-May meetings included reviewing “support for accountability measures and mechanisms to bring the perpetrators of atrocities to justice, including those committed in the context of Russia’s aggression against Ukraine.”

Also in May, the department announced the launch of a “conflict observatory” to improve the sharing and analysis via an online platform of evidence of Russian atrocities in Ukraine, including satellite imagery and information shared over social media.

“The program encompasses the documentation, verification, and dissemination of open-source evidence regarding the actions of Russia’s forces during President Putin’s brutal war of choice,” states the department press release. “The Conflict Observatory will analyze and preserve publicly and commercially available information … consistent with international legal standards, for use in ongoing and future accountability mechanisms. This includes maintaining rigorous chain-of-custody procedures for future civil and criminal legal processes under appropriate jurisdictions.”

The UN special rapporteur on extrajudicial, summary or arbitrary executions, Morris Tidball-Binz, recently warned there were too many overlapping national efforts to investigate and prosecute Russian war crimes and he pleaded for better multinational coordination, as well as respect and support for the efforts of Ukraine’s own prosecutor general.

“Without coordination of responsibilities and of efforts between various bodies, there is a considerable risk of overlap and duplication to the detriment of the effectiveness and efficiency of investigations,” Tidball-Binz said in a statement last month. “Proper coordination can also prevent the re-traumatization of victims and witnesses arising from being interviewed multiple times by different investigators and ensure that interviews fit into the overall investigative strategy.”