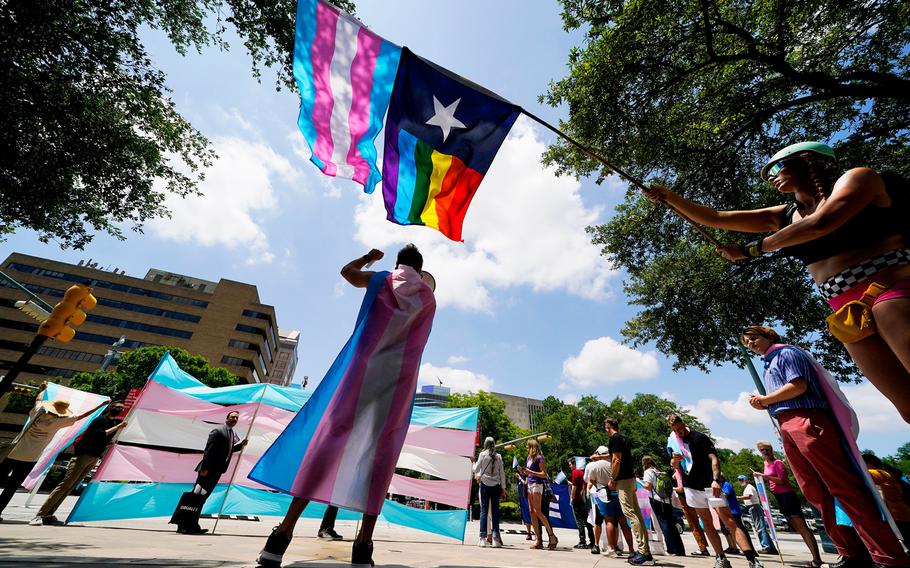 Demonstrators gather on the steps to the State Capitol to speak against transgender-related legislation bills being considered in the Texas Senate and Texas House, May 20, 2021, in Austin, Texas. (Eric Gay/AP)

A Texas judge on Friday temporarily blocked the state from investigating families of transgender children who have received gender-confirming medical care, a new obstacle to the state labeling such treatments as child abuse.

“I do find that there is sufficient reason to believe that the plaintiffs will suffer immediate and irreparable injury if the commissioner and the (Department of Family and Protective Services) are allowed to continue to implement and enforce this new Department rule that equates gender affirming care with child abuse," Soifer said at the end of a roughly 40-minute hearing.

The ruling comes about a month after the Texas Supreme Court allowed the state to investigate parents of transgender youth for child abuse while also ruling in favor of one family that was among the first contacted by child welfare officials following order by Republican Gov. Greg Abbott.

“That families will be protected from invasive, unnecessary, and unnerving investigations by DFPS simply for helping their transgender children thrive and be themselves is a very good thing,” Brian K. Bond, executive director of PFLAG National, said in a statement. “However, let’s be clear: These investigations into loving and affirming families shouldn’t be happening in the first place."

The latest challenge was brought by Lambda Legal and the American Civil Liberties Union on behalf of the families of three teenage boys — two 16-year-olds and a 14-year-old — and PFLAG. An attorney for Lambda Legal told the judge that the 14-year-old's family had learned after the lawsuit's filing that the state's investigation into them had been dropped.

Spokespeople for Abbott and Attorney General Ken Paxton did not immediately respond to requests for comment Friday afternoon.

An attorney for the state had argued during the hearing that applying the order to any member of PFLAG was “untenable" and would be difficult for the department to comply with. But Lambda Legal senior counsel Paul Castillo said that parents could simply show their membership receipt or some other proof of membership.

The families had talked in court filings about the anxiety that the investigations had created for them and their children. The mother of one of the teens said her son attempted suicide and was hospitalized the day Abbott issued his directive. The outpatient psychiatric facility where the teen was referred reported the family for child abuse after learning he had been prescribed hormone therapy, she said in a court filing.

A judge in March put Abbott's order on hold after a lawsuit brought on behalf of a 16-year-old girl whose family said it was under investigation. The Texas Supreme Court in May ruled that the lower court overstepped its authority by blocking all investigations going forward.

That lawsuit marked the first report of parents being investigated following Abbott’s directive and an earlier nonbinding legal opinion by Paxton labeling certain gender-confirming treatments as “child abuse.” The Texas Department of Family and Protective Service has said it opened nine investigations following the directive and opinion.

Abbott’s directive and the attorney general’s opinion go against the nation’s largest medical groups, including the American Medical Association, which have opposed Republican-backed restrictions filed in statehouses nationwide.

Arkansas last year became the first state to pass a law prohibiting gender-confirming treatments for minors, and Tennessee approved a similar measure. A judge blocked Arkansas’ law, and a federal appeals court will hear arguments in the case next week.

The judge set a June 21 hearing on whether to extend the order into a temporary injunction blocking the investigations.