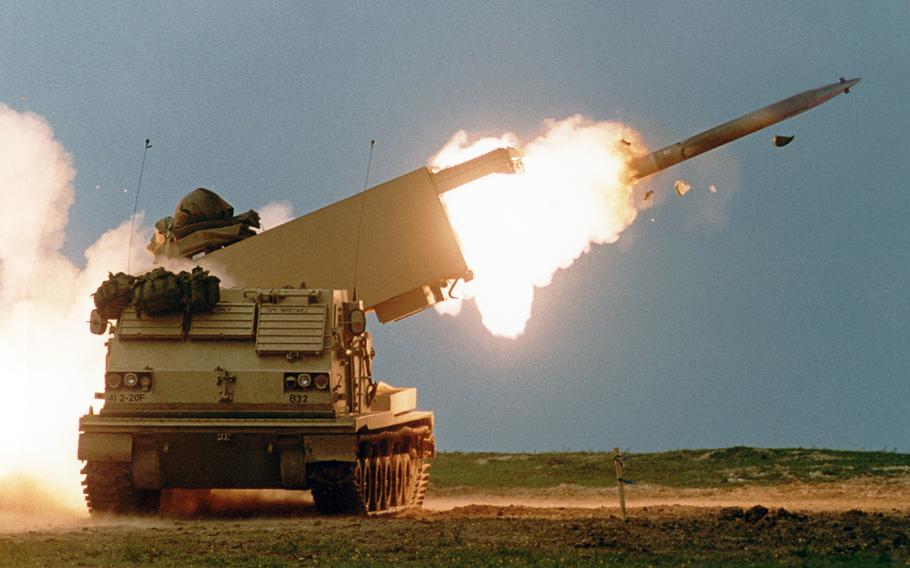 The U.S. military has devised a plan to train a platoon of Ukrainian soldiers at a time on how to use sophisticated multiple-launch rocket artillery, the Pentagon’s top general said Wednesday, raising the likelihood that more of the weapons could be sent to Ukraine.

The plan is contingent on an initial group of Ukrainian soldiers, now learning the system from U.S. troops in Germany, showing proficiency on it, said Army Gen. Mark Milley, chairman of the Joint Chiefs of Staff. The transfer of additional rocket artillery to Ukraine from existing U.S. Army or U.S. Marine Corps stocks also would require explicit approval from the Biden administration.

“We’ve got to start this thing with a program that is rational and deliberate and gets them trained to a standard where they become effective,” Milley said, speaking to reporters as he returned to Washington from France. “It will do no good to just throw this weapon system into the battle. You’ve got to be trained on it to get the maximum effective use out of the weapon as a precision system.”

The comments came after the Biden administration last month approved the transfer of four M142 High Mobility Artillery Rocket Systems, commonly known as HIMARS, to Ukraine, and after Britain said it would send three M270 multiple-launch rocket systems, which perform a similar function. The British also will train a platoon at a time under the plan, Milley said, allowing Ukrainian forces to build up their rocket artillery.

Ukrainian officials have said for days that they need dozens of rocket artillery systems to beat back Russian forces, who continue to make slow gains in Ukraine’s eastern Donbas region after a full-scale invasion launched Feb. 24.

Milley said that the Russians have “demonstrated that they are outgunning and outranging Ukrainian artillery” so far in fighting in the eastern Donbas region, which has become the primary emphasis in Russian operations.

The United States already has shipped Ukraine dozens of M777 howitzers, artillery that commonly launches explosive 155 mm rounds up to about 25 miles. Milley said Ukrainian forces have used those weapons to great effect, but the Ukrainians need “some longer-range artillery systems” that can reach farther distances.

Colin Kahl, the U.S. undersecretary of defense for policy, left open the possibility that the United States could send additional HIMARS to Ukraine as he announced June 1 the first four systems had been approved. The United States first wants to get more information about how useful they are and how the Ukrainians are using them, he said. He predicted then that it would take about three weeks to train the first group of Ukrainian soldiers. Milley said Wednesday that it will take three or four.

The Biden administration approved the transfer of the first four systems after receiving assurances from Ukraine that it would not use them to launch cross-border attacks on Russia, Kahl said. The administration also decided to send munitions for them that have a range of about 45 miles, rather than the long-range Advanced Tactical Missile System (ATACMS) that can reach up to 186 miles.

Both the HIMARS and multi-launch system that the British are providing require a significant amount of training, Milley said. U.S. troops have developed an accelerated training program for Ukrainian soldiers who already have fired other kinds of artillery in part because they are not starting from scratch.

“The Ukrainians have very good artillerymen. Very good gunners. They’re excellent at artillery,” Milley said. “But they have been using Soviet-era systems, and then transitioning to different [Western] systems.”

On Wednesday, Ukrainian forces remained locked in a brutal fight to maintain territory in the city of Severodonetsk, a key battleground in the Kremlin’s bid to capture the Donbas region, as Kyiv and Moscow continue to spar over a U.N.-backed proposal to avert worsening global food shortages by securing safe corridors for millions of tons of Ukrainian grain.

Luhansk regional governor Serhiy Haidai said Ukrainian troops were facing an onslaught of Russian shelling that is targeting Ukrainian-held supply lines in Severodonetsk, the largest city in Ukraine’s Luhansk region, where Moscow claims it now controls 97% of the territory.

“Fierce battles are taking place . . . Our defenders are fighting for every inch of the city,” said Haidai, who acknowledged that Ukrainian troops may need to “withdraw to stronger positions.”

Local officials have confirmed that Russian forces have captured most residential areas in the city as part of their advance, but Britain’s Defense Ministry on Wednesday reported that Ukrainian defenses “are holding” and said neither side has gained much ground over the past day.

Severodonetsk would be a significant symbolic win for Moscow, which claims it has recently restored rail and road links to the annexed Crimean peninsula via freshly captured Ukrainian cities, consolidating its gains in the country’s south.

Turkish and Russian foreign ministers met in Ankara on Wednesday for “substantial” talks on a U.N.-backed proposal for secure safe shipping lanes, designed to facilitate exports of some 20 million tons of grain trapped by a Russian blockade of the Black Sea ports.

The blockade has raised alarms over a potential global food shortage that could lead to famine in developing countries if shipments aren’t able to leave the ports, some of which have been littered with defensive Ukrainian mines and are under fire from Russian land and sea units.

Turkish Foreign Minister Mevlut Cavusoglu said following the meeting that the proposal — which reportedly includes a plan for Turkey to assist in demining the Ukrainian ports and escorting commercial vessels — was “reasonable.” He also said it’s “entirely legitimate” for Russia to request relief from sanctions on its own exports as part of any deal. No immediate agreements have come of the talks.

Russian Foreign Minister Sergei Lavrov on Wednesday blamed Ukraine for the impasse and said Russia was willing to provide security guarantees if Kyiv agreed to remove mines from its Black Sea ports or “ensure passage through the minefields, as our Turkish friends are telling us.”

Lavrov denied the current global food shortage was linked to the war in Ukraine, while European Union leaders railed against what they say are Russian efforts to weaponize food supplies since the invasion began. Speaking in the European Parliament on Wednesday, Ursula von der Leyen, the head of the European Union’s executive branch, said the blockade on Ukrainian grain was “a cold, callous and calculated siege by Putin on some of the world’s most vulnerable countries.”

Ukraine has made urgent calls for a deal on the shipping lanes, but remains wary of the U.N. proposal, which it says could allow Russia to exploit safe zones to carry out strategic attacks on southern cities, including Odessa, which is still under Ukrainian control.

The White House announced on Wednesday that President Joe Biden will travel to Europe for Group of Seven and NATO summits later this month where he will meet with global leaders to discuss further efforts so support Ukraine, as well as the food and energy crisis caused by the conflict.

Foreign fighters from Britain and Morocco who joined the war in Ukraine against Russia have gone on trial this week, according to Russian media.

Two British men, Aiden Aslin and Shaun Pinner, as well as a Moroccan identified as Brahim Saadoun, appeared in a courtroom behind bars in footage on the Belarusian outlet Nexta. They were asked whether they had any objections to their indictments, and all answered no before taking a seat.

The men are accused of acting as mercenaries, according to Nexta. The trial is taking place in a pro-Russian separatist region of Donetsk, under the control of the prosecutor general’s office of the self-proclaimed Donetsk People’s Republic.

Meanwhile, nuclear radiation detectors are back up and running at the Chernobyl site for the first time since the war began, the United Nations’ nuclear watchdog said.

“Dozens” of radiation detectors “are once again transmitting data,” after teams “succeeded in reviving a vital information link that was cut at the start of the conflict more than 100 days ago,” the International Atomic Energy Agency said in a statement Tuesday.

The detectors were set up after the 1986 nuclear disaster at Chernobyl to monitor radiation levels around the defunct plant in northern Ukraine.

The radiation monitoring network in the area stopped functioning on Feb. 24, the first day of Russia’s invasion after its troops occupied the Chernobyl site, the IAEA said. Russian forces held the Chernobyl zone for five weeks before withdrawing at the end of March amid an international outcry and fears of another nuclear disaster.

The Washington Post’s Kareem Fahim and Zeynep Karatas in Istanbul, Amy Cheng and Andrew Jeong in Seoul, Adela Suliman in London, Lateshia Beachum in Washington and Mary Ilyushina in Riga, Latvia, contributed to this report.