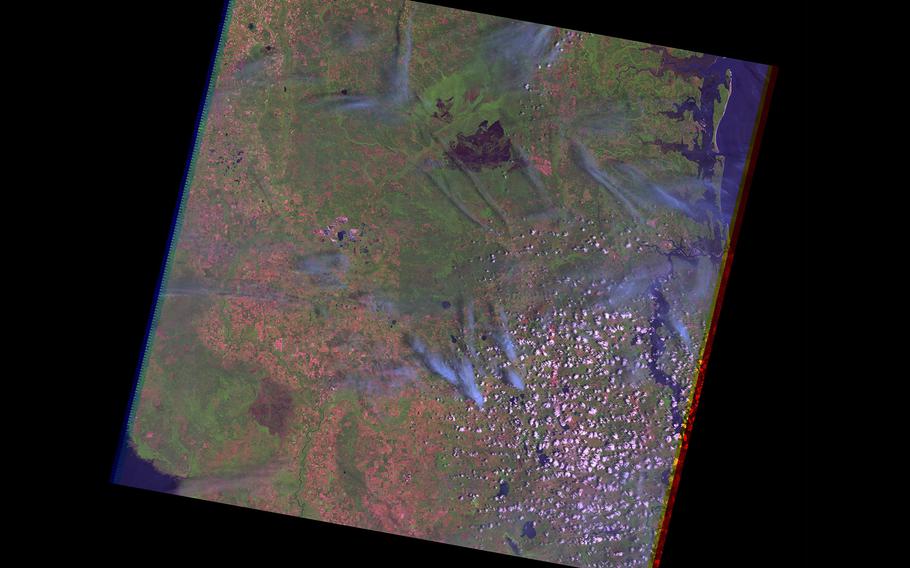 A satellite false-color composite image using infrared, near-infrared, and green wavelengths shows an overhead view of the Okefenokee National Wildlife Refuge in southern Georgia on May 15, 2002. A titanium mine planned on the doorstep of the refuge was dealt a major blow Friday, June 3, 2002, when the U.S. Army Corps of Engineers moved to restore federal oversight of the project. (Defense Department/NASA)

(Tribune News Service) — A controversial titanium mine planned on the doorstep of the Okefenokee National Wildlife Refuge in Southeast Georgia was dealt a major blow Friday when the U.S. Army Corps of Engineers moved to restore federal oversight of the project.

The move by the Corps, now under President Joe Biden, is a major reversal from policy enacted under former President Donald Trump and reflects a stronger environmental and regulatory posture in Washington.

Assistant Secretary of the Army Michael L. Connor said in a memorandum that the Corps was invalidating a previous ruling issued in October 2020 which had cleared the project from needing federal approval. That 2020 decision was made under the Trump administration, which had lifted federal protections for many wetlands and streams, including some on the proposed mine site.

The 2020 ruling had placed the fate of the mine solely in the hands of Georgia’s Environmental Protection Division (EPD).

Now, Friday’s reversal means the mining company will need to reapply and seek new permits from the Corps, subjecting the project to a comprehensive review that could take years to complete.

In its new determination, the Corps said that the Muscogee Creek Nation had not been properly consulted when the decision to remove federal oversight was made. The Okefenokee Swamp holds great cultural and historical significance to the tribe.

The Corps’ ruling is an enormous setback for Twin Pines Minerals, LLC, the Alabama-based firm that has been seeking permits from Georgia EPD.

Steve Ingle, president of Twin Pines, said the company will reapply and said it can mine “safely and without harming the Okefenokee or cultural resources in any way.”

“We intend to move forward with our application and fulfill all requirements,” he said. “Considering the recent news that China controls 90% of the world’s rare earth minerals essential for high technology products and the military’s communications, satellite, weapons and defense systems, it is more important than ever to secure those minerals from domestic sources and our project in Charlton County can do just that.”

The company had planned to mine on a 740-acre segment of Trail Ridge, an ancient sand dune complex that runs along the eastern edge of the swamp.

The proposed mining operation in rural Charlton County was pitched by Twin Pines as an economic win for a county with a median income of about $43,000, roughly 30% below the statewide median.

But environmental experts had long warned that mining near the swamp could lower water levels and risk permanent damage to its fragile ecosystem. The refuge is home to thousands of species, including 40 species of mammals, more than 200 species of birds, 50 species of reptiles, and more than 600 plant species, including many that are federally protected, according to the Okefenokee Protection Alliance.

Environmentalists who have fought the mine for years praised the Corps’ reversal.

“Formally rescinding the unlawful decisions made by the prior administration restores protections for wetlands that are vital to the swamp’s unique ecosystems and makes it possible for the many Georgians, visitors from across the country, and people worldwide who love to visit, paddle, and explore this iconic place to continue to do so,” Kelly Moser, a senior attorney at the Southern Environmental Law Center, said in a news release.

U.S. Sen. Jon Ossoff, D- Ga., who had pushed the Corps and other federal agencies to review the mine’s potential impact on the swamp, also cheered Friday’s decision.

“For the last year I’ve fought relentlessly to protect the Okefenokee Swamp from destruction,” he said in a separate release. “The Okefenokee is a natural wonder and one of Georgia’s most precious lands. I will continue fighting to protect it for future generations.”

Visit The Atlanta Journal-Constitution at www.ajc.com