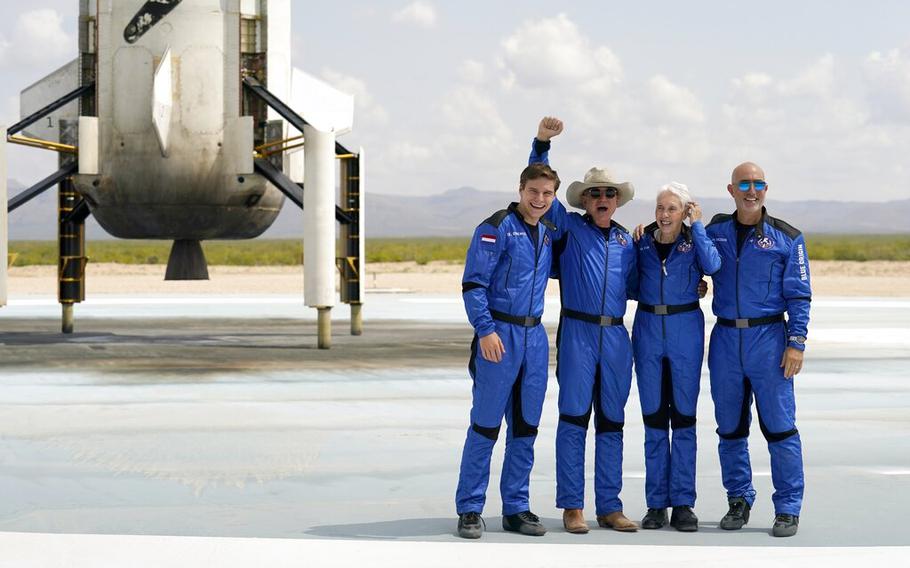 From left, Oliver Daemen, Jeff Bezos, founder of Amazon and space tourism company Blue Origin, Wally Funk and Bezos’ brother Mark pose in front of the Blue Origin New Shepard rocket, after their launch from the spaceport near Van Horn, Texas, on July 20, 2021. Blue Origin sent up its New Shepard rocket with humans on board on Saturday, June 4, 2022. (Tony Gutierrez/AP)

Blue Origin sent up its fifth-ever New Shepard rocket with humans on board. The NS-21 mission lifted off at 9:26 a.m. EDT Saturday from the company's West Texas facility with six people on board, one of them the company's first repeat customer.

The tourism rocket launches and lands in about 11 minutes offering those on board a few minutes of weightlessness and a view of the Earth's curvature as it speeds up past the Karman line — about 62 miles high — the internationally recognized altitude for someone having gone into space. NS-21 made it past 66 miles altitude.

While this was the 21st launch of New Shepard overall, the first with humans on board, including company founder billionaire Jeff Bezos, didn't happen until July 2021. Since then it had flown successfully three more times with notable passengers including Star Trek's William Shatner, NFL Hall of Famer Michael Strahan, and Laura Shepard Churchley, daughter of Alan Shepard, the first American in space for whom the rocket is named.

The last flight for New Shepard was on March 31, that flew for the second time with the full complement of six passengers including Winter Park power couple Marc and Sharon Hagle.

Sharon, the founder of Florida nonprofit SpaceKids Global, left a message for the NS-21 crew.

"After today, your life will never be the same," she wrote. "Once you see the world from a different perspective, you have a responsibility to make the world a better place. It is an emotional experience. That being said, as the engines ignite and you feel the thrust, have fun and enjoy the ride. God speed."

The capsule touched down at 10 minutes and 5 seconds after liftoff within distance of the launch pad. This was its sixth trip to space, designed for up to 25 flights during its lifespan. Also being reused for its seventh flight was the rocket booster, which successfully touched down at the facility's landing pad.

The NS-21 mission is the second in 2022 as the company looks to up the pace of its revenue-generating tourism flights. Officials during coverage of the flight announced a goal of four more flights in 2022, nearing a total of having ferried 50 people to space across nine flights since 2021. Prices for a ride on the rocket have not been revealed by the company.

The Saturday launch, though, means it has now sent 25 people into space in less than a year, one of them having flown twice.

That person is multimillionaire Evan Dick, who already flew alongside Strahan last December on NS-19.

Also on NS-21 was Katya Echazarreta, the first Mexican-born woman in space who got her ride sponsored by nonprofit Space for Humanity, whose mission is to expand access to space.

Two thrill-seeking buddies were on board: Hamish Harding, chairman of Action Aviation, who has a history of seeking world records in aviation, and Victor Vescovo, co-founder of private equity investment firm Insight Equity, who has climbed the seven summits and skied to the North and South Poles as well as dived via submarine to the deepest point in the world's five oceans.

Also on the crew was Victor Correa Hespanha, 28, a civil production engineer from Brazil who became the second Brazilian in space. His seat was sponsored by the Crypto Space Agency.

Rounding out the six was Jaison Robinson, who founded commercial real estate company JJM Investments, and co-founded Dream Variations Ventures with wife Jamie, a group that invests in technology and sports start-ups. Robinson was a finalist on Survivor: Samoa in 2009 and was once on the U.S. National Water Polo team.

New Shepard is part of a bigger space footprint in play by Blue Origin that also includes the production of the heavy-lift New Glenn rocket to launch from Cape Canaveral Space Force Station, and the development of a commercial space station called Orbital Reef.