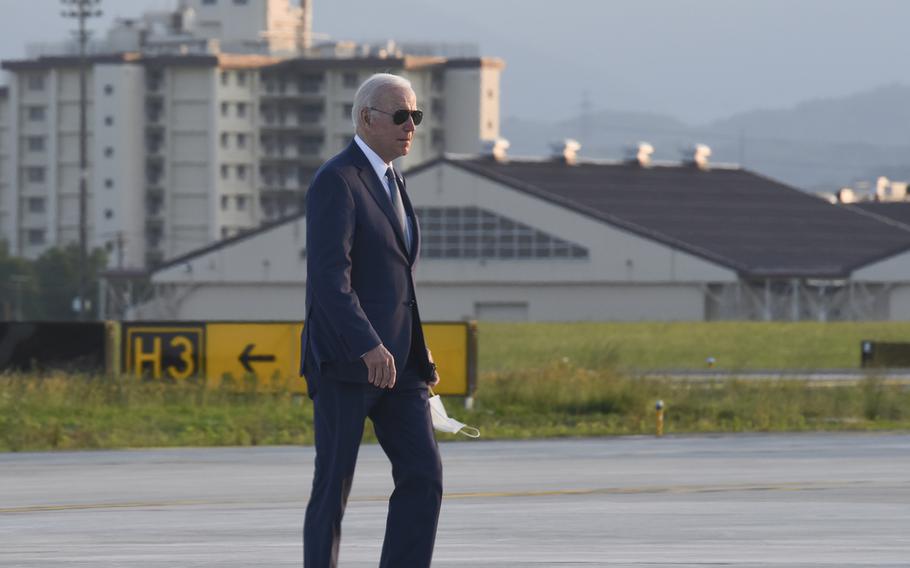 President Joe Biden walks toward Air Force One ahead of his departure from Yokota Air Base, Japan, Tuesday, May 24, 2022. (Kelly Agee/Stars and Stripes)

WASHINGTON - Russian President Vladimir Putin’s invasion of Ukraine has prompted a major rewrite of the Biden administration’s National Security Strategy, according to people familiar with the matter.

Early versions of the text, which is still being finalized, show how the administration’s priorities are shifting in response to Putin’s war in Ukraine and the burgeoning partnership between Beijing and Moscow.

The document’s publication, originally slated for this past January, was delayed after U.S. officials came to believe that a Russian invasion of Ukraine was likely. It is now being substantially rewritten to reflect the ways the world has changed since the war began, the people said. It’s not yet clear when it will be published, and one of the people emphasized it may still undergo changes.

Produced by every administration since Ronald Reagan’s presidency, the National Security Strategy provides one of the most important windows into the White House’s thinking on foreign policy issues.

The document, mandated by Congress, is designed to help lawmakers evaluate the administration’s budget priorities for national security; to clarify U.S. relationships with allies, partners, and adversaries; and to ensure that representatives from across the U.S. national security apparatus speak to foreign counterparts with one voice.

Spokespersons at the National Security Council didn’t respond to a request for comment.

Secretary of State Antony Blinken’s recent speech on U.S. policy toward China suggests one potential formulation for the way the document will weigh threats from Beijing and Moscow. Russia, Blinken said, is a “clear and present threat,” whereas China is “the most serious long-term challenge to the international order.”

More fundamentally, the strategy is likely to argue that neither Russia’s challenge in Europe nor China’s in Asia can be dealt with in isolation.

“For us, there is a certain level of integration and a symbiosis in the strategy we are pursuing in Europe and the strategy we’re pursuing in the Indo-Pacific,” National Security Advisor Jake Sullivan told reporters on May 18. “President Biden’s unique capacity to actually stitch those two together is, I think, going to be a hallmark of his foreign policy presidency.”

In particular, Putin’s invasion of Ukraine has brought China’s ambitions toward the democratically-governed island of Taiwan into sharp focus for U.S. policy makers. Even before the war began, Biden officials argued that China would likely view America’s response to the Ukraine crisis as a proxy for how it would deal with more aggressive action by Beijing against Taiwan.

Since the war began, American officials have viewed several developments as sending a powerful message to Beijing, including the rapid deployment of sanctions against Russia in partnership with European allies, the bolstering of European defense budgets and the willingness of NATO allies to abandon decades of more cautious policies to aid Ukraine with financial and military support.

“The Chinese are going to watch this very, very carefully,” Lieutenant General Scott Berrier, director of the Defense Intelligence Agency, said last month of Putin’s war in Ukraine. “It’s going to take some time for them to sort out.”

Officials in President Xi Jinping’s government have repeatedly rejected accusations that they seek to attack Taiwan, which China views as part of its territory despite never controlling it. At the same time, Xi’s government has warned that the U.S. is taking a “Cold War” approach toward Asia. Beijing has sought to counter that by bolstering ties with Pacific Island nations while reiterating its claims to disputed areas of the South China Sea.

The Biden administration’s focus on the interconnected nature of Europe and Asia has also been driven by a growing recognition of the partnership between Beijing and Moscow, as well as the willingness of Asian countries such as Japan and South Korea to sanction Moscow over the invasion, the people said.

The result has been a burgeoning U.S. dialog with Asian nations about events in Europe and with European countries about events in Asia, officials say. Whereas discussions with European nations about the Indo-Pacific during the Obama administration were “difficult, challenging, often suspicious,” they are now “deeply productive,” White House Indo-Pacific Coordinator Kurt Campbell told the Center for Strategic and International Studies on May 9.

The revised security document is also expected to feature a clearer articulation of the link between emerging transnational threats such as climate change and traditional geopolitical competition, one of the people said. Outer-space, for example, is both a transnational issue as well as a venue where geopolitics plays out, the person said.