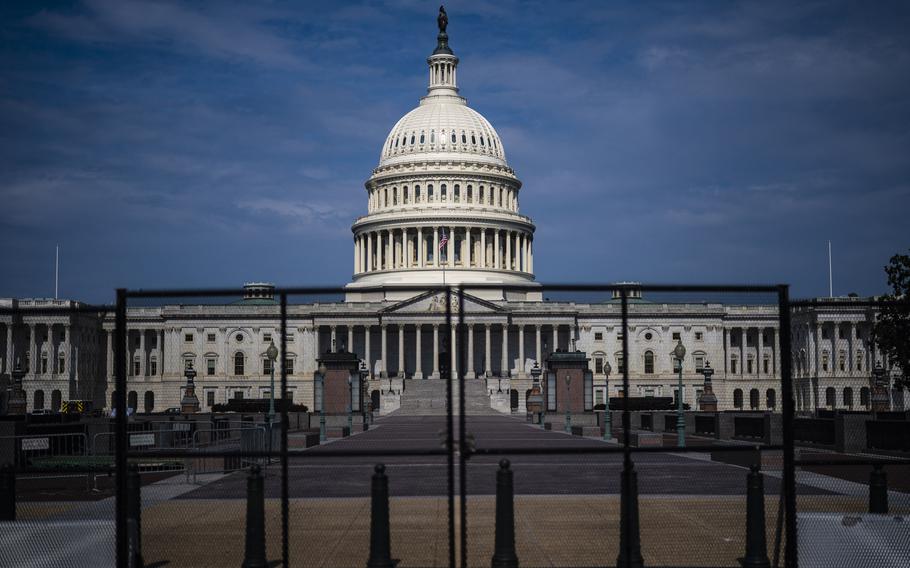 Fencing, erected after the Jan. 6 riot, is seen surrounding the Capitol building in Washington on July 9, 2021. Capitol police on Friday, June 3, 2022, arrested Jerome Felipe, a retired N.Y. police officer, who flashed a fake badge and made a false statement that he was a criminal investigator. (Jabin Botsford/The Washington Post)

The early morning arrest happened after a U.S. Capitol Police officer started talking to a man who had parked his 2017 Dodge Charger near Peace Circle, on the West side of the Capitol, officials said.

Jerome Felipe, who retired from the NYPD in 2018, flashed a fake badge that said “Department of the INTERPOL” and made a false statement that he was a criminal investigator with the agency, according to the Capitol Police.

Felipe gave officers permission to search his vehicle. The officers discovered a BB gun, two ballistic vests, several high-capacity magazines, and other ammunition in the car. No real guns were found, officials said.

Investigators are still working to determine the reason Felipe was parked near the U.S. Capitol.

He is facing charges of unlawful possession of high-capacity magazines and unregistered ammunition.

“We are fully cooperating with the U.S. Capitol Police investigation,” the spokesman said.

According to department records, Felipe was a member of the department’s housing unit and had one civilian complaint against him, which was determined to be unfounded.