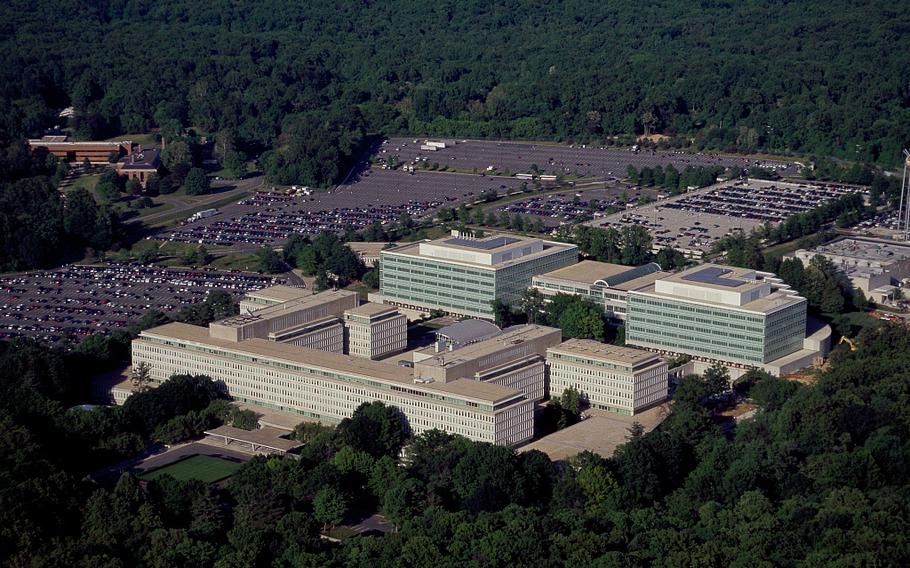 An aerial view of the CIA headquarters. (Wikimedia Commons)

David C. MacMichael, a disillusioned CIA analyst who accused the Reagan administration of misrepresenting intelligence as part of an effort to overthrow the left-wing government of Nicaragua, claims that foreshadowed the political scandal known as Iran-contra, died May 16 at his home in Linden, Va. He was 93.

The cause was pneumonia, said his wife, Barbara Jentzsch.

A former Marine Corps captain with counterinsurgency expertise and a Ph.D. in history, MacMichael joined the CIA in 1981 as a contract employee, analyzing military and political developments in Central America at a time when the region was considered a key Cold War battleground, home to the leftist Sandinista government in Nicaragua and a growing left-wing insurgency in El Salvador.

Amid fears that the Soviet Union was trying to stir up a communist revolution on the doorstep of the United States, the Reagan administration began funding right-wing Nicaraguan rebels known as the contras, justifying the effort by citing a flood of Soviet weapons that the Nicaraguan government was purportedly providing to Salvadoran guerrillas.

But as MacMichael began studying the situation, he found that the flow of weapons into El Salvador appeared to have stopped in early 1981, soon after Reagan took office. When he questioned his superiors about the lack of intelligence backing the White House’s claims, he was given vague answers. “They kept saying we have it,” he told the Guardian, “but they never showed it to me, even though I was cleared for everything except nuclear matters.”

Over time, MacMichael said, he learned that Reagan had approved a CIA plan to create a covert force of 1,500 fighters in an effort to destabilize the Nicaraguan government. The claim that Nicaragua was arming Salvadoran rebels, which the White House repeated in statements to Congress and the public, appeared to be little more than a pretext for backing the contras and pursuing regime change in Managua, the capital.

After MacMichael’s two-year contract with the CIA was not renewed, he traveled to Nicaragua on his own expense to examine the situation on the ground. He then met with members of Congress and began working with a lawyer, trying to make sure he didn’t run afoul of a secrecy agreement he had signed when he joined the CIA. Fearing that Reagan was moving toward “a major military intervention” in Central America, he began speaking out in 1984.

“The whole picture that the administration has presented of Salvadoran insurgent operations being planned, directed and supplied from Nicaragua is simply not true,” he told the New York Times. At a news conference, he went further, saying: “There is a point where exaggeration becomes impossible to distinguish from prevarication. If ever a major public policy of the United States has been justified on such flimsy grounds, such patently unprovable claims, I cannot recall it.”

Those claims were repudiated by senior officials including CIA Director William Casey and Secretary of State George Shultz, who suggested MacMichael “must be living in some other world” to deny the transfer of arms from Nicaragua to El Salvador. But his disclosures intensified a debate over whether the U.S. government should support the contras, who were accused of widespread human rights violations, including kidnapping, torturing and executing civilians.

Later that year, Congress voted to cut off funding to the rebels and, effectively, to bar the use of federal money for the contras. Senior officials in the Reagan administration continued to support the group, developing a covert scheme in which arms were sold to Iran in exchange for the release of American hostages held in Lebanon, with some of the proceeds diverted to the Nicaraguan rebels.

When the operation came to light in 1986, it erupted into one of the biggest political scandals in recent decades, leading to more than a dozen indictments and tarnishing the administration’s public image.

MacMichael said he had initially hoped he wouldn’t have to challenge the official U.S. position on the contras, believing that “the lack of evidence for the administration’s case” and “the wild and overstated pronouncements” of the president and other top officials would undercut support for the group. He changed his mind, he added, “when I realized that people were dying brutally and in large numbers in Nicaragua on the basis of these untruths.”

“You find yourself in this situation maybe once in a lifetime,” he later told author Richard Thieme. “You only come to the plate once and had better take your swings. I took my swings. That was my one ethical plus in a lifetime of unethical behavior.”

David Charles MacMichael was born in Albany, N.Y., on June 5, 1928, and grew up in Leonia, N.J. His mother was a homemaker, and his father was a concert pianist who later worked for the Heinz food processing company.

After graduating from high school, MacMichael served in the Marine Corps and studied history at Hampden-Sydney College in Virginia, receiving a bachelor’s degree in 1952. Returning to the Corps as an officer, he was sent to Korea and severely wounded during an artillery attack in 1953. He spent 19 months recovering at a naval hospital, according to his daughter Alicia Williamson.

MacMichael resigned his commission in 1959 and returned to school, receiving a doctorate in history from the University of Oregon and teaching at Dominican College of San Rafael, now the Dominican University of California.

In the mid-1960s he was recruited to the Stanford Research Institute, which had connections to the Defense Department, and was assigned to work on counterinsurgency projects in Thailand.

MacMichael later testified about his CIA work at an International Court of Justice hearing, after the Nicaraguan government accused the United States of violating international law through its support for the contras. The Reagan administration boycotted the proceedings, saying the court lacked jurisdiction, and the court ruled in favor of Nicaragua, which later withdrew its complaint under a post-Sandinista government.

After MacMichael left the CIA, he worked for the Council on Hemispheric Affairs, a Washington-based research organization focused on Latin America, and co-founded Veteran Intelligence Professionals for Sanity, a group of former intelligence officials that protested the U.S.-led invasion of Iraq in 2003.

He also maintained a devotion to physical fitness that he traced back to his years in the Marine Corps. At 65, he walked across the country, starting at Point Reyes in California and finishing near Washington. He later completed the Appalachian Trail and, as recently as last year, chopped firewood for exercise.

His marriage to Martha Ostrander ended in divorce. In 2003, he married Barbara Jentzsch, a German journalist. In addition to his wife, of Linden, survivors include three children from his first marriage, John Francis MacMichael of Portland, Ore.; Williamson of Gaston, Ore.; and Stephanie Kolkka of Redwood City, Calif.; a brother and a sister.

MacMichael told the Guardian that even after he left the CIA, his connection to the agency shadowed his advocacy efforts in Nicaragua, where he sought to volunteer with Witness for Peace, a grass-roots organization, by picking coffee in conflict zones as an expression of solidarity with Nicaraguan workers.

“But I couldn’t get on any team. Every time they heard who I had worked for,” he said, “they wanted me to ring a little bell as I came down the road like a leper.”