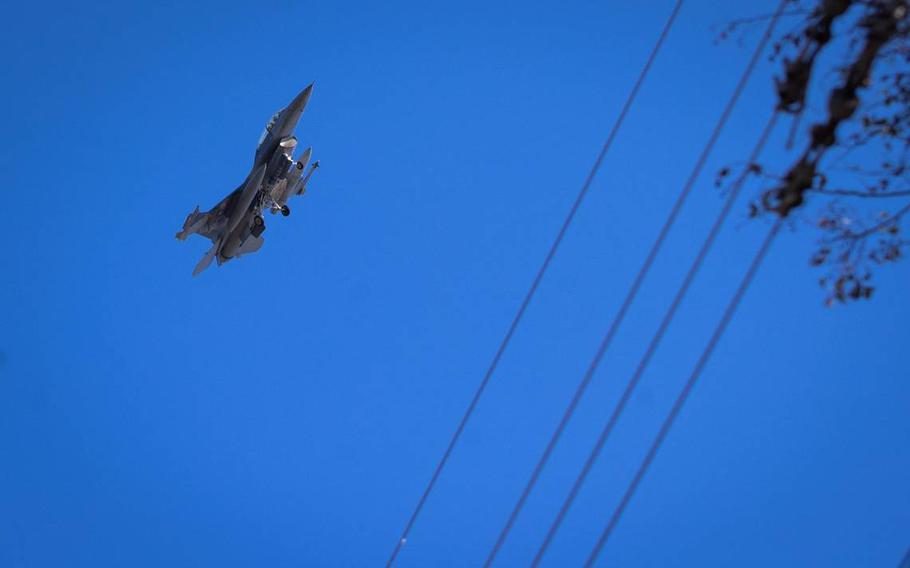 A military jet flies over homes along Caddo Trail in an area designated as Accident Potential Zone I in October in Lake Worth. The Department of Defense recommends no housing in that type of zone. (Yffy Yossifor/TNS)

(Tribune News Service) — The city of White Settlement has purchased land in the flight path of Naval Air Station Joint Reserve Base in Fort Worth to avoid future development in an area considered high risk for crashes.

In September, a Navy training jet smashed into a Lake Worth neighborhood just north of the base, inside the northern crash zone, injuring the two pilots and damaging three homes.

The city on Wednesday closed the deal to buy the former Ridgmar Farmers Market and Cowtown BBQ property, under a program that aims to align properties near the airbase with federal safety recommendations.

The city used funds from the North Central Texas Council of Governments to purchase more than 4 acres. The final sale price was $2.25 million, according to the former property owner and to the White Settlement city manager.

The property, which abuts the south side of the naval air station, had been a farmers market and barbecue joint for years. But the city and the base have raised concerns about its proximity to the runway, said White Settlement’s city manager, Jeff James.

The base is home to about 40 commands with 10,000 active-duty military, Guardsmen, Reservists and civilian employees. The air station runway is also used by Lockheed Martin.

Now that the parcel is in the city’s hands, it will be repurposed first as a storage area for city vehicles while the public works yard undergoes repairs, and then as a field, James said.

These new uses will decrease the number of people who are in and around the property at any given time, which also reduces the safety risks inherent to the location.

Those uses will align more closely with recommendations by the U.S. Department of Defense.

In an effort to protect both military installations and the people living, working or shopping nearby, the Pentagon has set up crash zone designations near military runways.

The Naval Air Station Joint Reserve Base’s crash zone extends in mirror images north and south of the ends of the runway. The boundaries of the zone indicate the areas where it is statistically more likely that a plane would crash, because accidents typically occur near takeoff or landing.

For each crash zone, the Defense Department makes recommendations on how to most safely use the property. For instance, the properties sitting directly at the end of a runway should not be used for housing or commercial uses, the department recommends. Slightly farther out, housing may be permissible but only if it is low-density.

But these are recommendations, not requirements, meaning that many properties within the naval air station’s crash zone do not align with federal recommendations.

A Star-Telegram investigation after last year’s crash found that the site had denser housing than recommended, and that there were an additional 200 homes nearby where the Defense Department recommends no housing at all.

The former farmers market and restaurant parcel sits directly south of the airstrip, placing it squarely within the area where the military recommends no housing or dense commercial uses.

“Most recently it was used as a barbecue restaurant and a farmers market. So, those would be two land uses at the end of a military runway that the Department of Defense would absolutely qualify as non-compatible,” said Dan Kessler, the Council of Governments’ assistant director of transportation.

Kessler also said that there are additional funds to acquire other properties in the crash zone. The Regional Transportation Board, which is part of the North Central Texas Council of Governments, has set aside $2.7 million to acquire properties in the zone, Kessler said.

Three adjacent properties, including the former farmers market property, have been flagged for potential acquisition, according to Council of Governments’ documents from an April meeting.

There is no indication that the remaining two properties will be sold in the immediate future.