Pfizer seeks authorization of a coronavirus shot for children under 5 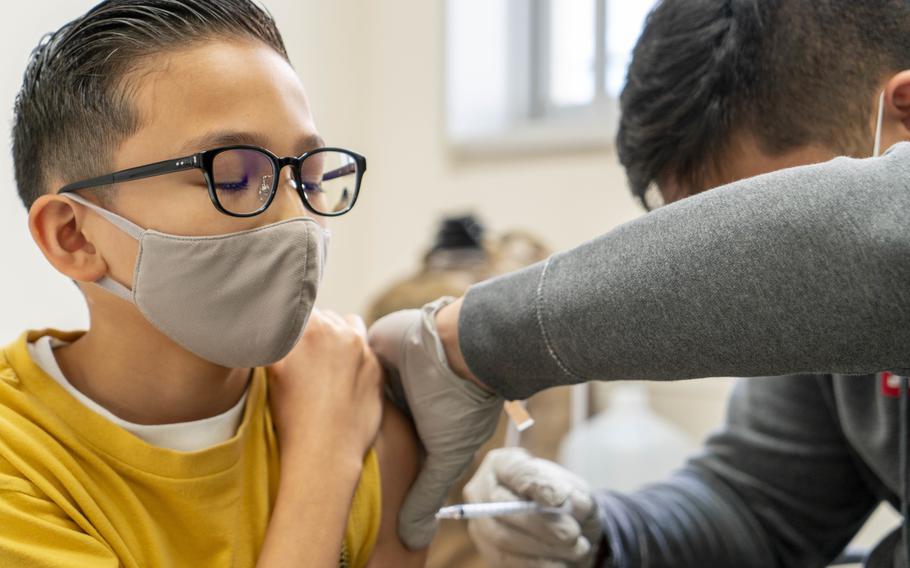 Hospitalman Chandler Story administers a Pfizer COVID-19 vaccination Nov. 16, 2021, to a DoD dependant at Sullivans Elementary School during a vaccination event for children aged 5-11 on Yokosuka Naval Base in Japan. (Conner Houghtaling/U.S. Navy)

Pfizer and its German partner, BioNTech, on Wednesday finished submitting an application for regulatory authorization of a coronavirus vaccine for children younger than 5, according to two people familiar with the matter.

The development marked another important step toward providing vaccine for the last segment of the U.S. population that does not have access to shots.

The news comes a week after Pfizer-BioNTech announced that three shots of its low-dose pediatric vaccine triggered a robust immune response in young children and was safe. The partners began sending data to the Food and Drug Administration in February.

The advance toward a vaccine for infants, toddlers and preschoolers has been an achingly slow and incremental process, with pediatricians and families waiting for an opportunity to vaccinate young children.

“We recognize parents are anxious to have their young children vaccinated against COVID-19,” FDA spokeswoman Abigail Capobianco wrote in an email. She said the agency would move “as quickly as possible using a science-based approach.”

FDA advisers are scheduled to meet June 15 to discuss the three-shot Pfizer-BioNTech pediatric vaccine and a two-shot regimen from the biotechnology company Moderna. The agency is expected to act quickly, meaning young children could get their first shots this month.

Data on both vaccines has been available only in news releases so far. The FDA review of the details and the all-day session on June 15 with outside experts digging into the data will be critical in showing what is known about how well the vaccines work and any differences between the two regimens.

When Pfizer-BioNTech announced the data last week, it unveiled a preliminary analysis that suggested — albeit with a small number of cases — that its vaccine was 80% effective in preventing symptomatic illness among the youngest children.

Pfizer and BioNTech had said the 80% efficacy finding was preliminary and based on 10 cases of covid-19 in the study population as of the end of April. Once 21 cases have occurred, the companies will conduct a more formal analysis of efficacy. The emergency authorization submission includes data on immune responses measured in the laboratory, safety and efficacy, the partners said.

Moderna’s two-shot regimen triggered a strong immune response in young children. And tests in the field showed it was 51% effective in preventing illness in children between 6 months and 2 years old and 37% effective in children ages 2 to 5.

Pfizer and Moderna have said their vaccines are safe and tolerable, but the side effects are likely to be scrutinized, particularly the rate of high fevers.

Pfizer’s data may have additional complexity. The third shot was added to its pediatric trial in December after it became clear that two shots failed to muster a sufficiently strong immune response in children ages 2 to 4. The third shot is to be given at least two months after the second shot, but the data in the trial may include a much longer time gap for some children.

If there is a longer gap between shots for some children in the trial, it could start a debate about the timing of the shot — and whether there should be more time between the second and third shots.

If the FDA deems both vaccines safe and effective, it is expected to act quickly. Advisers to the Centers for Disease Control and Prevention would then debate how the vaccines should be used, and CDC Director Rochelle Walensky would make a recommendation. About two-thirds of children between 5 and 11 are not vaccinated, according to the CDC. While a vocal segment of parents has been demanding that the FDA move faster to get shots to the youngest children, other parents are expected to move more slowly to get their children vaccinated, or to refuse shots altogether.